Paris: Closed for the month of August


Paris, at least my non-touristy part of the city, feels oddly quiet these days, almost like a ghost town.  There isn't very much traffic on the roads and there are plenty of empty tables at the cafe behind my apartment. While I had heard about the mass exodus in August, which is when many well-to-do Parisians exchange their hectic urban lives for a month of relaxing on the beach, I had no idea that Paris would feel so strange without the Parisians. I miss them! Life just isn't the same without all of their frenetic energy. You may, however, need to remind me of this post when I start complaining about the woman who cut in front of me in the long line at the grocery store or the crowds on the metro in September!

Even though some of the smaller stores and restaurants in Paris are closed, here are links for two other websites with helpful information about what is open:

How do they do it? This store on the rue Saint Honore must be doing alright to be able to close for the entire month. Interestingly enough, it seems that only their French speaking clients are "aimable" because the word "kind" isn't used to describe the English speaking customers in the multilingual sign on the door. I wonder what it says in Japanese. 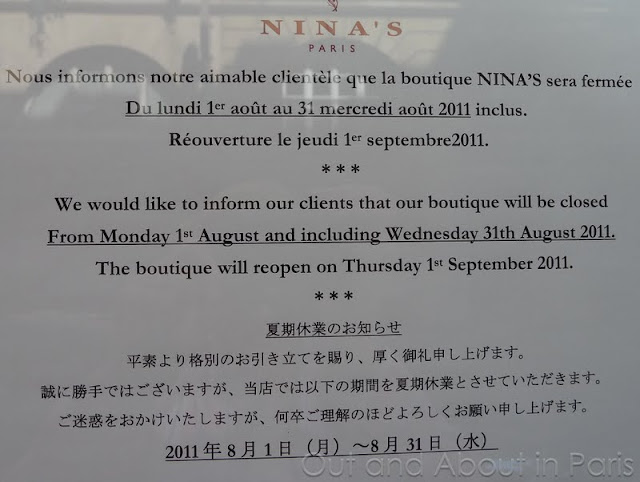