The American Cemetery in Normandy and the story of Pvt. John A. Daum

Seeing row after row of crosses and Stars of David at the American Cemetery in Normandy, it's hard to hear the individual voices of the men who lost their lives while fighting to liberate France from Nazi Germany. There are thousands of dead soldiers, each with his own story. Here's the tale of one of them, Private John A. Daum, a paratrooper from a small town in Wisconsin.

According to the testimony written by John's nephew, John worked for a farmer and at the Weinbrenner Shoe Factory in Marshfield, Wisconsin before enlisting. After completing his basic training at Camp Robinson, Arkansas, he joined the paratroopers. Letters home told of the daily five to ten mile runs and how he was taught to pack his parachute, to jump from towers and finally from a plane. In a letter to his father, John proudly mentioned that even though it was "really hot and a lot of soldiers were getting sick" that the "Daum blood kept him going."

John received his wings on October 2, 1943 and joined the 508th Parachute Infantry Regiment of the 82nd Airborne at Camp Mackall. From there he traveled to Northern Ireland and then to Nottingham, England, where he said that there wasn't much to do except train and go to town. Fortunately, the young man from Wisconsin found the girls from England to be "nice". In the last letter to his family, John thanked them for the candy that they had sent and asked them to send socks. He told them not to worry and that he hoped to return to Wisconsin in a year. John never did return home. He was killed in battle at the age of 20.

John A. Daum was just a regular guy. So, why did I pick him out of the 9,387 people who are buried at the American Cemetery? I didn't. But since I found myself fighting back tears when our tour guide read the following letter that a visitor left by John's grave in 2007, I wanted to learn more about one soldier, who just happened to be John, as a way of honoring all of the men and women who lost their lives during World War II. 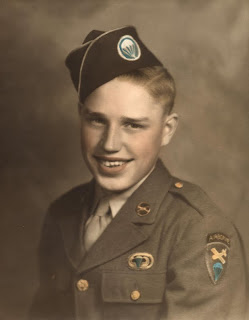 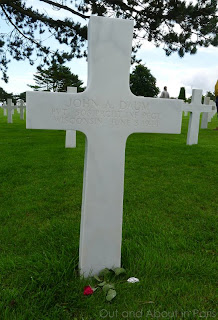 The following letter was written by a man from Saint-Symphorien, Belgium and was left on John A. Daum's grave at the American Cemetery. Our tour guide kindly gave me a copy of it.

John, you've been buried here for over 60 years, in this land of France that saw your last days. These last days where you fought for the liberation of a country, a whole continent and a civilization. When I found your picture, I started thinking a lot about you, your face, your pink cheeks, almost the face of a child. Your smile tells me you must have been mischievous, cheerful and full of life.

Then I felt a deep sorrow because I know that on that day of June 6 th, 1944, when you jumped into the cold black night on the Normandy beach, you must have been terrified. Terrified before the unknown, terrified at the thought of never seeing your family again, of loosing your army companions, of being alone, of death itself. Nevertheless, you survived that historic night and fought for two long days, before you fell on June 8 th.

I wonder how were the last moments of your life, with who you were. From the bottom of my heart, I hope that you were not alone. Because I know that your comrade-in-arms must have done everything to protect you, reassure you and comfort you.

I read the letters that were addressed to your parents when you passed away and realized that you were very much appreciated by your army companions.

Before I leave John, I would like to tell you how much I am aware that your ultimate sacrifice and the one of thousand of men like you has allowed me and all of us, to live in a land of freedom and peace.

For all of this, I am sincerely grateful. So, I promise you that every time I will travel to Normandy, I will come visit you to honor your memory. I will lay my hand on your white cross, so that you are not alone in the dark anymore. I will keep your memory alive in my heart and I will never forget what you have done for me, for our liberty, for all of us.

The average age of the soldiers buried in the American Cemetery is 24 years.

The families of 60% of the 30,000 American soldiers killed during Operation Overlord decided to have the bodies of their loved ones repatriated. Others, like John Daum's mother, did not bring the body of her son back to the United States "because a neighbor had brought her son home for burial and it was like losing him all over again....Plus, Bud [John] was resting where they had buried him."

John's body is buried in Plot F, Row 23, Grave 42 in the American Cemetery in Normandy.

While it's distressing to see the graves of so many young men, the American Cemetery and Memorial is a beautiful tribute to the soldiers who lost their lives. If you're going to visit Normandy, be sure to schedule enough time to see the excellent exhibits in the Visitor Center, to walk through the cemetery, and to watch the film, Letters. Free guided tours are offered in English at 11:00 a.m. and 2:00 p.m. during the summer and at 2:00 p.m. during the winter. For additional information, please visit the official website of the American Battle Monuments Commission.

This is already a long post, but I'm including some more pictures just in case you don't have the opportunity to travel to Normandy to visit the American Cemetery.

[Edit] After publishing this post, I discovered that there is additional information about John A. Daum in the section marked "Photogallery" on the website  for the 508th Parachute Infantry Regiment. Please take some time to visit "the Home of the 508th Parachute Infantry Regiment - the famed Red Devils of the All-American Division in World War II."

If you live near Normandy, please think about "adopting" a soldier. A French couple founded Les Fleurs de la Memoire, an organization that encourages French families to put flowers on the graves of the soldiers buried at the American Cemetery. Many thanks to Sally Byrne for telling me about her adopted soldier, 1st Lt Frank Trippensee from Missouri.