C'mon, Swiss! You can do better than this. Swiss National Day in Paris 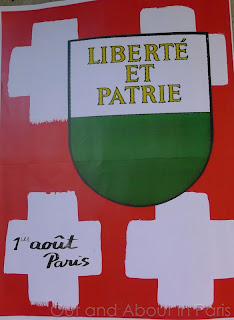 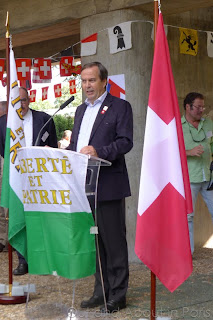 I've always been impressed by the linguistic skills of the Swiss, many of whom are fluent in three languages, but their singing of the national anthem to celebrate Swiss National Day in Paris was just plain pitiful.  Maybe it's because they weren't sure if they should sing in German, French, Italian, or Romansch, which are the country's four official languages.  Or perhaps it's because they were surrounded by concrete buildings instead of by magnificent mountains. Whatever the reason, they were embarrassingly and notably quiet during the anthem, even the Swiss ambassador to France.

But it's not too late because the words for the anthem are shown below.  Since we celebrated a couple of days early, you still have time to learn the anthem before going to the traditional village bonfire and eating grilled sausages and raclette this evening. Even though it's a tricky tune to follow, I'm sure that you'll be able to sing it once you know the words! Please note, however, that this post does not in any way refer to my Swiss friend, Heidi, who can probably sing the anthem backwards and forwards in German and French, and perhaps in Italian if she uses her hands for emphasis.

Aside from the notable silence during the anthem, it was fun to be amongst Stephane's compatriots on Saturday. With the largest concentration of Swiss (181,000) outside of Switzerland, France is considered to be the "fifth" Switzerland, preceded by the four official linguistic groups that make up the country's population.

Happy Swiss National Day! Be sure to eat a raclette and drink some white wine for me tonight. Cheers! -- Prost, Santé, Salute, and does anyone know how to say it in Romansch? 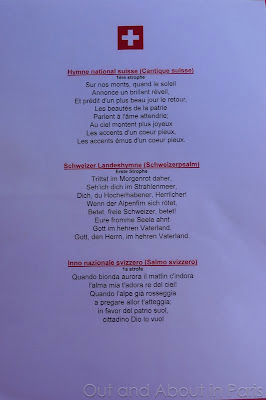