Paris is beautiful in the rain - if you have an umbrella


"Paris is beautiful in the rain" has become a popular refrain ever since Owen Wilson's character, Gil, encounters his soul mate, a beautiful French woman, who likes walking in the rain in Woody Allen's latest movie, Midnight in Paris.  But judging from all of the umbrellas that I saw in town yesterday, I don't think that many people would agree with Gil, especially since the weather is rather cool and inhospitable for July.

While scurrying from store to store and trying to stay dry under the one umbrella that I was sharing with my son, I was reminded of an historical marker that I had seen in the 1st arrondissement explaining that people used to be able to rent umbrellas in Paris.  What a clever idea and one that I wish was still in practice!

According to the plaque that is located on the corner of Rue du Chevalier Saint-George and Rue Saint Honore, the French word for umbrella, "parapluie" was officially admitted into the French language by the Academie Francaise in 1718, even though Jean Marius had been selling a folding umbrella that was all of the rage since 1710. Interestingly enough, carrying an umbrella was seen as a sign that you weren't wealthy enough to own a carriage and were obliged to walk the streets like a commoner. Nevertheless, a company was created to rent green silk umbrellas to those in need of protection in 1769, while in 1848 there were nearly 400 umbrellas makers in Paris.

If you would like to have a made-to-order Parisian umbrella or parasol, please read my post about umbrella maker extraordinaire, Michel Heurtault. 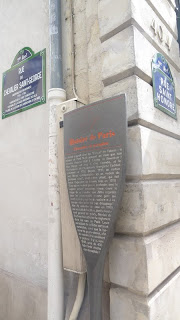 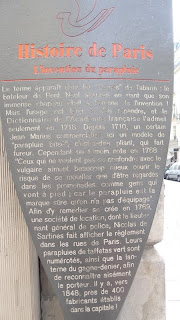