If you don't want to get lost in Paris... 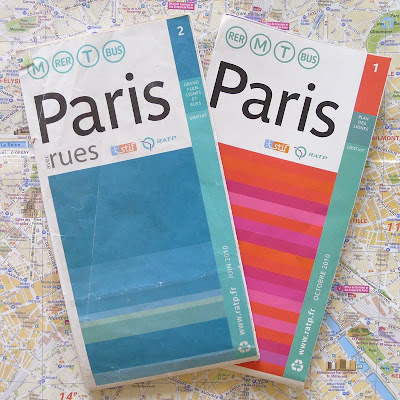 If you don't want to get lost in Paris, don't leave your map in Zara.  That advice seems simple enough, especially if you don't shop at Zara, but you would have been surprised by the number of people who left their maps in the store yesterday.  While waiting for my son to try on a pile of skinny jeans and graphic t-shirts, I watched as Italian, German, and American tourists came, shopped, and apparently left their maps behind.  When an exasperated salesmen picked up yet another map to add to their collection, I overheard him say to the manager, "Well, at least we aren't going to get lost!".

And if you do happen to forget your map while shopping the summer sales, you can always pick up a free one at one of the offices in the metro stations. I like the "Paris avec rues" map because it shows the major roads with the metro lines on one side and the bus lines on the other side.  You have to specifically ask for it, otherwise the agent will give you one of the smaller maps.
Labels: insider's tip