Could I be addicted to Paris? "The Greater Journey: Americans in Paris" by David McCullough 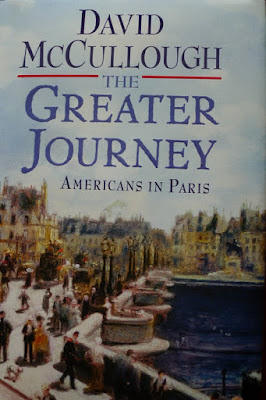 As many of you already know, I'm on vacation in the United States until July 17, but what I'm just starting to realize is that I may be addicted to Paris. Comparing my symptoms against a list of symptoms for addictions on the internet, I found the following:
Another sign of my addiction is that I've been unsuccessful in resisting the temptations of a book about Paris that I bought in Boston. I had intended to save The Greater Journey: Americans in Paris by David McCullough for when I was back at home, but it was as if a siren song was emanating from the suitcase where I thought that the book was safely stored out of my reach. During a moment of weakness, I told myself that I would read just a little bit of it last night. What could that hurt? And before I knew it, I was feverishly flipping through the pages and savoring the pictures of the Palais Royale Garden, the Louvre, and the Sorbonne. If you're suffering from similar symptoms, I strongly suggest that you get a copy of McCullough's book. His stories about the American artists, writers, doctors, politicians, and architects who moved to Paris between 1830 and 1900 are proving to be the perfect placebo for Paris.
Labels: books books on Paris David McCullough out of Paris The Greater Journey: Americans in Paris vacation