Patrick Roger's "Chocolate Mine", Maille Mustard Boutique and "The Queen of Versailles" 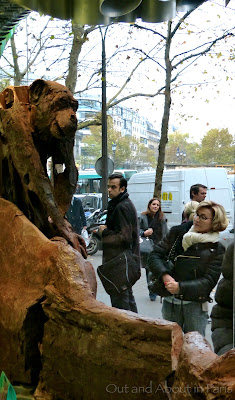 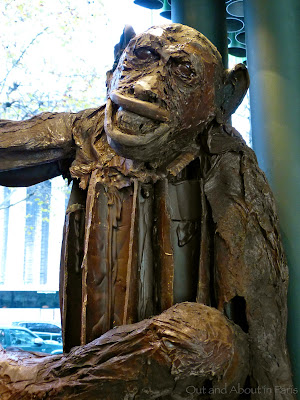 Since Stéphane is traveling for work this week, I thought that I would get up to a bit of monkey business - Parisian style. My first stop was Patrick Roger's newly opened boutique on the Place de la Madeleine, where chocolate monkeys with cheeky grins attract the attention of passersby. Described as a "chocolate mine" by Roger, who holds the title Meilleur Ouvrier de France, I had hoped to be able to visit all three floors. At the moment, however, visitors are restricted to the ground floor where the chocolatier's marvelous gourmet creations are available for purchase.

After selecting some cubes filled with nougatine praline and a couple caramelized almond and orange clusters, I asked the cashier when it would be possible to see the artist's incredible chocolate sculptures that I had heard were lurking in a simulated "chocolate eco-system" on the second floor and in the basement. Even though her answer was rather vague, I wasn't overly disappointed by my visit because I had the opportunity to take a photo of Patrick Roger, who's the equivalent of a rock star for chocoholics. Standing in front of clusters of aluminium cylinders that give the boutique the feel of a large beehive, Roger has every reason to grin. The store's design conveys his concern for the planet's well-being while providing a magnificent showcase for his chocolate art.

Please click here to see a post with photos of another one of Roger's amazing creations - a one ton chocolate gorilla! 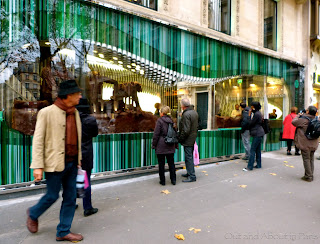 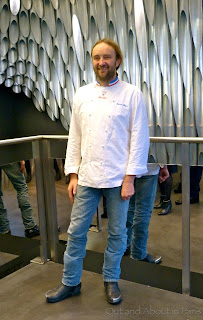 Crossing the Rue Royale, I walked the short distance to the Maille mustard boutique to refill our clay pots with fresh mustard, on tap. While waiting in line, I sampled a seasonal mustard made with honey and Modena Balsamic vinegar and eavesdropped on the excited American tourists who were exclaiming over the wide range of enticing flavors. Grilled onion and wild thyme. Gingerbread and chestnut honey. Oyster and chanterelle mustard. They all sound a lot more appealing than the French's yellow mustard that I used to slather on my hotdogs when I was a kid. With an assortment of gift boxes and mustard accessories, the Maille boutique is one of my favorite places to take visitors who want to take something typically French back home with them. 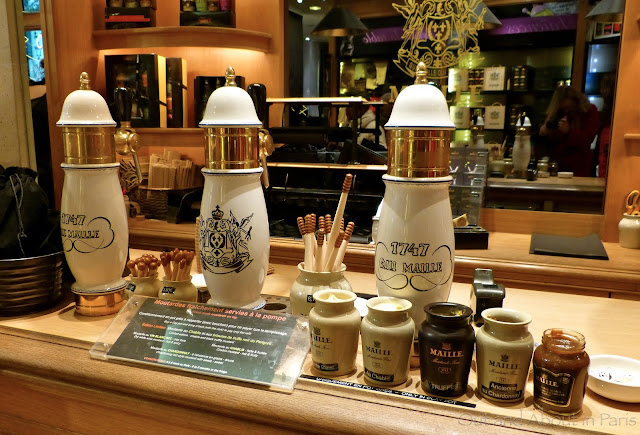 As anyone whose spouse travels on a regular basis knows, evenings are usually the loneliest periods of the day. It's when you need a distraction, something like Downton Abbey (Season Three). The only problem with that scenario is that I had rather stupidly agreed to wait until Stephane returned home to watch the next episode. Popping one of Patrick Roger's chocolates in my mouth, I tried to recall if there were any loopholes that would allow me to escape into the world of the aristocratic Crawley family and their servants. Unable to think of a thing, I was pleased to see that "The Queen of Versailles" is available on itunes because I've been wanting to watch this documentary ever since a friend told me about it. This riches to rags story about the billionaire family who set out to build a 90,000 square foot mansion inspired by Versailles made me think of the excesses of the French court and proved to be a very entertaining way to end my day. It's also a very good reminder that it's important not to live beyond our means. After all, does a private home really need 10 kitchens, a full-sized baseball field and $5 million worth of marble imported from China?

Another movie that I would highly recommend is Argo, Ben Affleck's latest thriller about the rescue of six American diplomats during the 1979 Iran hostage crisis. Even though I knew the ending, I was on the edge of my seat the entire time.