Playing with the big boys...


Every once in a while, I get to play with the big boys. You know, the ones with the extremely large cameras. Professional photographers. They live in a world where most of the inhabitants are males clad in faded jeans and black leather jackets. They carry backpacks stuffed with complicated lenses, tripods and collapsible stools. While waiting for the start of an event, they crack jokes, tell tales and show each other images of scantily clad females caught on their cameras. There's even a king, the United Press International (UPI) photographer, who stakes out his territory like a regal lion in the Serengeti. If a clueless female blogger toting a minuscule camera happens to crouch down in front of the le Roi and his cronies at a fashion show, she's told in no uncertain terms to move to the back. Chivalry, they laughingly explain, has its limits.

Quick to realize that survival of the fittest is the name of the game, I mimic the big boys and tell others to move to the back in a fierce voice that isn't my own. When an alliance forms against the late arrivals, I'm thankful that I claimed my spot an hour before the scheduled start of the show. With ten minutes to go, I tell (not ask) the guy in front of me to lean to the the right so that he doesn't block my view. Much to my surprise, he agrees. For the next hour, we're plastered together as the world around us shrinks to whatever we can see through our viewfinders. We're all trying to get the shot, the best shot.

While my cameras are nowhere nearly as impressive as those of the big boys, they're just what I need when I'm "out and about" in Paris. Plus, they only weigh a fraction of the larger ones.

Since I almost always "point and shoot", I can't tell you about the technical aspects of my cameras but I can tell you what I like about them:

Leica D-Lux 5 - I particularly like to use this compact camera when I'm trying to be discrete about taking photos in stores,  restaurants, museums, etc. It's also very good for shooting close-ups and taking pictures in dim light. Another feature that I like is that it's very easy to change the format of photos from square to rectangular. The only downside is that the zoom range is only 24-90 mm.

Panasonic Lumix FZ-150 - Larger and more than twice the weight of my Leica, this is the camera I usually carry with me in town because the zoom lens allows me to take photos of people in cafes, strolling down the street, etc. The downside is that I always look like a tourist because it's so obvious when it's hanging around my neck. Unfortunately, it doesn't take very good photos in dim light.

If my schedule permits, I hope to take a photography course at WICE next year because they offer some interesting options. Click here for more information.

Here are a couple more photos that I snapped at Le Salon de la Photo in Paris yesterday. In addition to showcasing all of the latest photography equipment, they had special photo opportunities with models, birds of prey and shiny motorcycles! 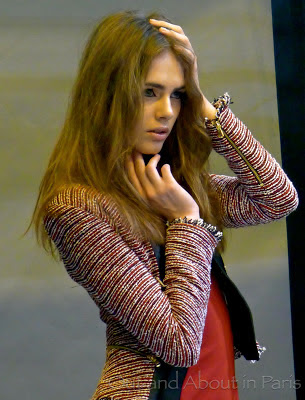 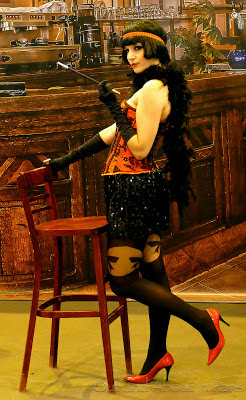