Ordering lunch or a cup of coffee in a country where you don't speak the language can occasionally feel like a daunting task. One restaurant in Paris offers an easy solution because each of their menus has pictures of all the signs needed to communicate an order. If you're thirsty and would like something to drink, simply make a fist with the fingers of your right hand, extend your thumb and raise your hand towards your mouth. But don't be surprised if your waiter responds with rapid hand gestures because Café Signes is operated by a mixture of non-hearing and hearing staff.

When Sylvia and I met in front of the world's most famous deaf-run restaurant for lunch in September, she asked how I had managed to make a reservation via telephone. Feeling rather sheepish, I admitted that I hadn't thought it necessary to call because the cafe is located on a quiet street in the 14th arrondissement far from the touristy center of town. I didn't anticipate that it would be a problem to get a table. It turned out that I was wrong because the restaurant was already full of animated diners obviously enjoying their delicious smelling food when we walked through the door promptly at noon. As we turned to leave, one of the hearing staff recommended calling in advance because the bistro is a popular destination for people from the neighborhood as well as from abroad. 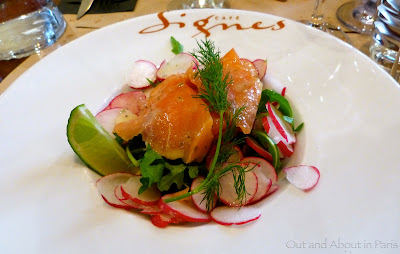 Anxious to have lunch at Café Signes, I followed the waiter's advice and booked a table for Sylvia's and my first get-together immediately following her return from a recent trip to the United States. While catching up on everything that had been happening in our lives during the last couple of weeks, I asked for an arugula salad and fish the same way I would in any other restaurant. It was only at the end of our meal that Sylvia and I realized that we had completely missed the opportunity to talk with the waiters in French sign language. We didn't even have to follow the suggestions on the menu about stomping on the floor or patting our waiter's arm to attract his attention because the service was so attentive. I don't mind though because it gives me a very good reason to go back to Café Signes. With a main course and a starter or dessert for 12 euros, it's one of the best deals in Paris. Plus, I really like the idea of supporting a restaurant whose goal is to bridge the gap between the speaking and non-speaking worlds.

Many thanks to Anne of "Just Another American in Paris" for sending me the link for an article in the Washington Post that mentions Cafe Signes in the story about Mozzeria, a deaf-owned restaurant in San Francisco. 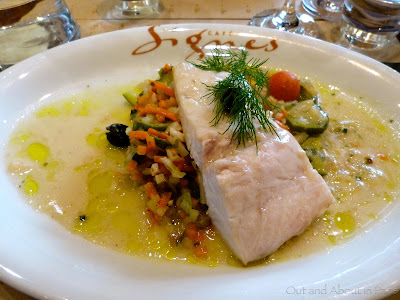