Day four of the 20 day cure


It all started a couple of weeks ago when my stomach began growing at an alarming rate, expanding beyond what I would have thought was physically possible. Knowing that I couldn't be pregnant because Stéphane had taken steps (snip, snip) many years ago to ensure that we wouldn't have more than two children, I didn't know what was going on. All I knew was that my stomach hurt like hell. I couldn't sleep, I didn't want to eat, I was burping like I had just guzzled a 6-pack of beer and, worst of all, I had gas (my apologies for being so indelicate, but there's not another way to say it!).

So, I gathered up my courage and did what you have to do in these situations in Paris. I went to the local pharmacy to ask for advice. Trying to appear nonchalant as I scanned the three employees to decide which one to approach, I rejected the man at the front of the store because there was a cluster of customers gathered around him. The last thing that I wanted was an audience listening to my tale of woe and offering advice. Deciding that the two women at the back looked like my best option, I quietly asked what they recommended for indigestion. After carefully surveying me from head to toe, one of the women asked if my stomach was swollen, like a balloon. "Oui!" I replied, while thinking that it actually felt more like an overinflated basketball, but who was I to quibble about medical metaphors with a professional. "And there's gas," I whispered. "Then you must do a twenty day cure" she declared. "No raw fruit or vegetables, no milk, no cheese, nothing with dairy."

Worried that she had mistakenly thought that I was lactose intolerant, I explained that I've never had any problems digesting milk products and added, almost as an afterthought, that my stomach issues had mysteriously started after a recent gastronomic weekend in Bordeaux. "Mais oui! That explains it!" the two women said in unison. Smiling at me as if I was innocent to the ways of the world, at least the one inhabited by French people, they repeated that the only solution was to do a cure. At this point, the man at the front of the store, who had obviously been eavesdropping, chimed in to say that coffee and wine were also strictly off limits. Mentally counting down the days until Stéphane's and my wedding anniversary and Christmas, I replied that the cure was starting to sound rather harsh. Cutting out raw veggies and cheese from my diet is one thing, but abstaining from wine and champagne during the holidays is entirely another matter. The women, acknowledging that I had a point, revised their stance and said, "Mais bien sûr you can have a glass of wine from time to time ... if it gives you pleasure!" And that, in a nutshell, is why I love the French.

The moral of the story is that moderation is the name of the game when you live in Paris. After surviving fiery hot nasi goreng merah in Indonesia, buss-up-shut in Trinidad and huge portions of sauerkraut and pork hocks in Germany, my stomach has finally met its match.

In my defense, it's pretty hard not to over-indulge when people keep offering you samples of wine in Bordeaux! 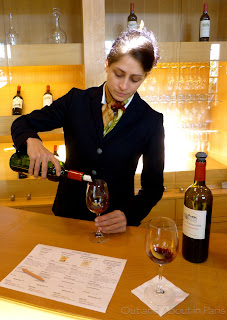 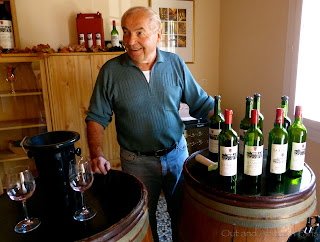