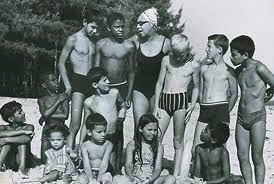 Who was the American superstar who adopted 10 boys and 2 girls of different races and religions because she believed that people of all nationalities could live together in peace?

If I'm ever asked this question while playing Trivial Pursuit, I'll be quick to respond, "Josephine Baker". It's one of the many intriguing facts that I learned about the American Music Hall performer while visiting the museum dedicated to her life and career at the castle she purchased in 1947. Perched on a craggy hill overlooking the Dordogne River, it's easy to understand why Josephine fell in love with Château des Milandes, calling it her "Sleeping Beauty Castle". The Gothic facade, stained glass windows, gargoyles and terraced gardens must have seemed like a fairy tale come true for the performer who was born in the slums of St. Louis, Missouri in 1906.

After a difficult childhood in which she was hired out as a maid whose hands were scalded as punishment for using too much soap for the laundry, Josephine started working as a dancer at a young age. She made her way to New York where she caught the eye of an American talent scout looking for African American performers to take to Paris. Josephine's long career in show business began at the Revue Nègre at the Théâtre des Champs-Elysées where her sensual dances captivated the audience. Describing her act, the French critic Pierre de Régnier wrote, “She is in constant motion, her body writhing like a snake or more precisely like a dipping saxophone. Music seems to pour from her body.”

Thanks to Josephine's star billing at the Folies Bergère and the subsequent opening of her own cabaret in Pigalle, the "Venus of Ebony" quickly became one of the highest paid entertainers in Europe and the favorite of artists and intellectuals such as Picasso, Maurice Chevalier, e. e. cummings, Jean Cocteau and Ernest Hemingway, who thought she was "the most beautiful woman there is, there ever was, or ever will be." Wealthy beyond her wildest dreams, Josephine had a penchant for dressing in designer clothes and parading her pet leopard down the elegant Champs Elysées.

Her life took a more serious turn when Germany occupied Belgium at the beginning of the Second World War and Josephine became a Red Cross nurse in charge of a refugee camp at the Gare du Nord. She also played an active role in the French Resistance by carrying secret information written with invisible ink on sheet music after telling the Head of the Counter-Intelligence Services "It is France that has made me who I am. I will be forever grateful to this country ... I am ready to give my life for France ... use me however you deem fit." In return for risking her life for five years, Josephine was awarded the Rosette of the Résistance in 1946 and the Legion of Honor and the Croix de Guerre in 1961.


Josephine Baker rented Château des Milandes and used it as a hiding place for both Jewish refugees and weapons for the Resistance during the Second World War. In 1947, she purchased the castle and transformed the estate into an amusement park with a dance hall called "Le Sans Souci" ("The Place of no Worries"), a theater, a J-shaped swimming pool, a tennis court and a mini-golf. Between 1954 and 1960, half a million people per year visited Josephine's castle to enjoy the ballets, jazz evenings, fireworks and dances.

Beginning in the 1950s, Baker and Jo Bouillon, her fourth husband, adopted children from Korea, Japan, Finland, Columbia, France, Ivory Coast, Venezuela and Morocco and brought them to Chateau de Milandes where they attended the village school and were taught French by a private instructor. It was Josephine's hope that her "Rainbow Tribe" would be a symbol of a united and happy multi-racial family.

Alas, Baker's extravagant lifestyle proved to be her downfall. Unable to limit Josephine's excessive spending, Jo Bouillon left to open a restaurant in Argentina in 1961. After being put up for auction several times, Milandes was sold for one-tenth of its value in 1968, with a clause giving Josephine the right to live there for another year. When Josephine was notified while on tour that the new owner was planning to evict her, she returned home and barricaded herself inside. In a reprehensible act, workers locked Josephine out of the castle when she went outside to collect some water. Photos show Josephine huddled on her doorstep in a state of shock before she was taken to the hospital. Upon her release, she was allowed to remain in Milandes for the remainder of the year. At the age of 62, Josephine moved to the Cote d'Azur.

Josephine's remarkable life ended on April 12, 1975 when she suffered a brain hemorrhage while in Paris to perform at the Bobino Theater in a spectacle celebrating her 50 years in show business.