Will I finally get to wear the crown? Three Kings Cake (Galettes des Rois)


Certain things are meant to remain a mystery but when our daughter noticed the Three Kings Cakes (Galettes des Rois) making their annual appearance, she couldn't control her curiosity any longer and asked why our family always had two kings instead of one on January 6 (Epiphany). Deciding that it was the right moment to share a family secret, I revealed that I had always planted two little kings in the cake so that both of our children would have the pleasure of being named "King (and Queen) for the Day". After pondering the wily ways of her mother, Sara asked why her father and I never found one of the little plastic kings or broad beans in our cake by mistake, thus forcing me to confess that it was all part of the plan. Just like a gambler marks a deck of cards, I marked the location of the figurines when I baked our Three Kings Cake to ensure that Sara and Philippe would find them.

This year, however, chaos may reign supreme on January 6 because we're going to buy a cake from our local bakery and the location of the lone plastic statuette will be anyone's guess. Perhaps I'll finally have the good fortune to be crowned "Queen for the Day"!

Interestingly enough, President Sarkozy won't be able to wear the gold paper crown because French presidents aren't allowed to "draw the kings" on Epiphany. In accordance with etiquette, a traditional galette minus the plastic figurine and crown will be served at the Elysée Palace.

While looking for my recipe for Three Kings Cake, I came across these notes that Sara took when she learned how to make a Three Kings Cake at the Alimentarium in Vevey, Switzerland many years ago. 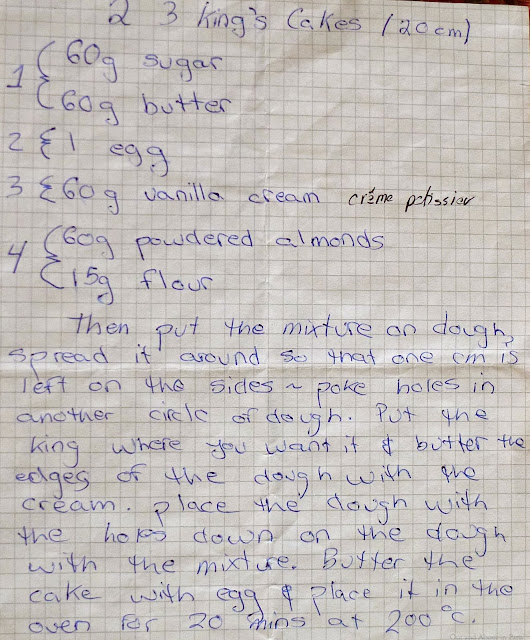