Brrr! Baby, it's cold outside, but it's perfect weather for onion soup at Carette's


After months of warmer than average temperatures, the bitter cold came as a rude shock while I was wandering around the upper 16th arrondissement yesterday. Fortunately, I had spied Carette's tearoom as my bus navigated the Place du Trocadero, so I promised myself a bowl of their rich onion soup capped with gooey cheese as a reward for successfully completing my errands. Even though nothing went the way I planned - the doctor's appointment didn't happen because of an administrative error (theirs, not mine!) and the Filipino grocery store wasn't where I thought it would be - I made it to Carette's shortly after 2:30 pm and settled into the cozy art-deco environment like a cat next to a  warm fire. 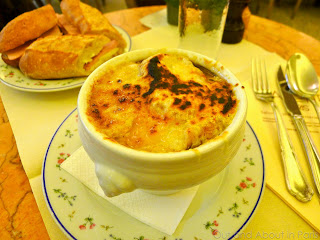 With a thick layer of melted cheese, the generous portion of onion soup was the perfect antidote for my chilled fingers. The baguettes, however, are better enjoyed as part of the onion soup than as a sandwich. And even though I don't like to admit it, I did indulge in a pot of their lusciously rich hot chocolate and a mini macaron for dessert. Delicious!

While Carette's Tearoom has been known for its pastries since 1927, I was equally impressed by the professional yet caring attitude of the staff, who went to great lengths to help the elderly gentleman seated next to me. It's people like these who easily dispel the myth that all Parisians are rude.

Although I find Carette's tearoom a bit pricey, it's a good destination for a special treat on a cold day.