Crossing one off the bucket list: Dîner en Blanc (White Dinner) at the Louvre and the Eiffel Tower 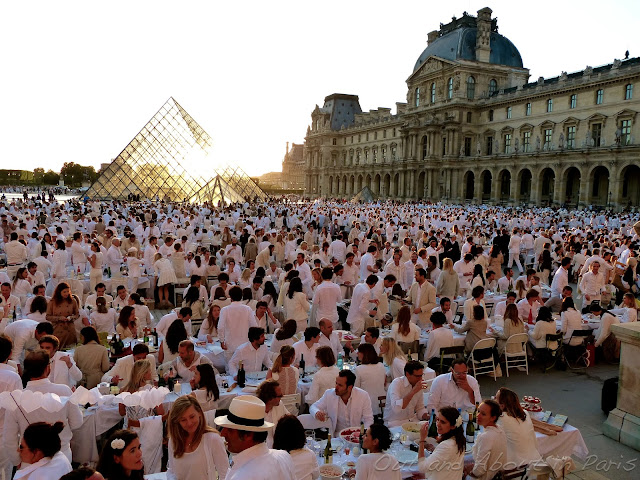 Excerpt from My list of ten things to do during the next months in Paris (April 5, 2012)

Dinner in White (Dîner en blanc) is a flash mob of thousands of elegantly dressed Parisians in white clothes who descend on a famous landmark for dinner. As they reduced the guest list from 14,000 to 8,000 last June, I'm trying to figure out how to get an invitation for this year. Any ideas?

Not that I'm counting, but Stéphane and I have lived in Paris for two years, three months and fifteen days. We're at the stage of our expat assignment when friends are starting to ask where we'll be moving next. Will it be Switzerland, somewhere else in Europe, perhaps a country in Asia or will we still be in Paris next year? "I don't know" is my standard answer. It's true. I really don't have a clue. The only thing that I know for certain is that I've still got a lot of things that I want to do before we pack our bags. Fortunately, I was able to cross one of them off my bucket list because I finally made it to the annual Dîner en blanc (White Dinner) last Thursday. Even though I went as a photographer (aka "party crasher") dressed in white and not an official guest, it was a magical evening. 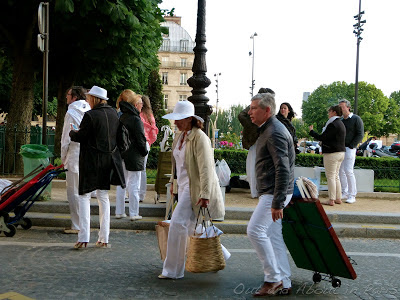 The excitement began when I received a text message from Sylvia and Ella Coquine saying that large groups of people conspicuously dressed in white were starting to congregate in front of Le Fumoir, the exact place where we had agreed to meet for a drink while waiting for news about the venue of the world's most exclusive dinner party. Part of the cachet of the Dîner en Blanc is that not anyone, not even the official guests, are told the location of the dinner until a mere thirty minutes before the event. Waiting patiently with bags full of champagne, china dinner services, white floral arrangements, candelabras, tables and white chairs, all of the elegant Parisians were on stand-by. Just like us. Suddenly, there was a buzz of conversation and a river of white flowed towards the Louvre. Incorrectly thinking that the invitees were on their way to yet another location, Sylvia and I hugged Mlle Ella goodbye and followed hot on their trail. 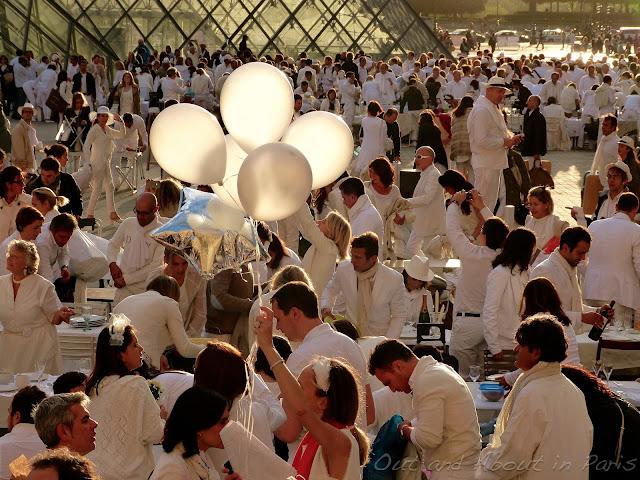 Imagine walking into the courtyard of the Louvre and suddenly spotting thousands of people busily preparing for one of the world's largest al fresco dinner parties. You would think that it would be chaotic, but it's not. All of the guests are familiar with the rules governing the event and know exactly what must be done before the celebration can begin. For example, invitees must arrive and depart by bus or organized public transportation, allocate seats in a very specific manner, with men on one side and women on the other, and take all of their trash away with them when they leave. The diners must enhance the value of the public space by charming passersby with the unexpected rather than detracting from it. And, most incredibly, it works. 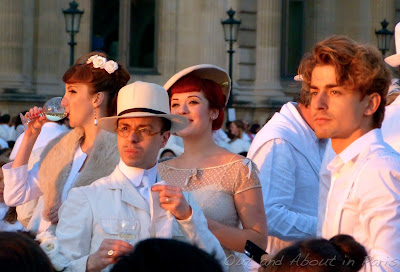 While snapping photos of the Dîner en Blanc at the Louvre, I received a text message saying that there was another dinner happening simultaneously at Trocadero. Unbeknownst to me, the organizers had started dividing the group into two a couple of years ago to accommodate the more than 11,000 participants. After confirming that Sylvia was up for another adventure, we hopped on the nearest metro and headed towards the Eiffel Tower. 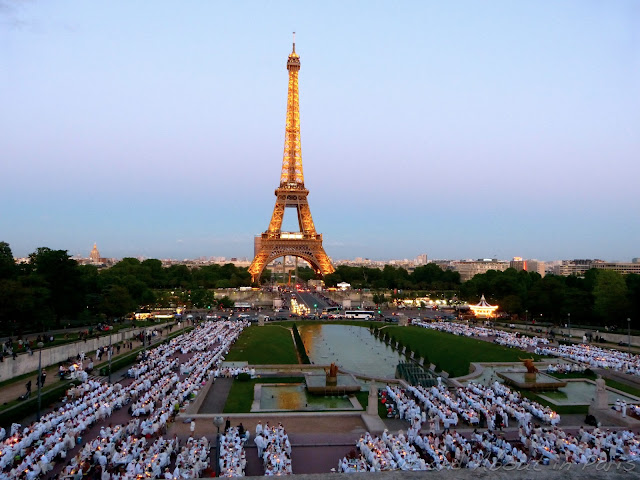 As the timing of the entire evening is carefully orchestrated to produce an extraordinary visual event, all of the diners were still seated at their tables when we arrived at Trocadero. Shortly before 11:00 pm, thousands of people stood in unison and raised sparklers towards the sky just as the Eiffel Tower started to sparkle. It was an amazing sight. 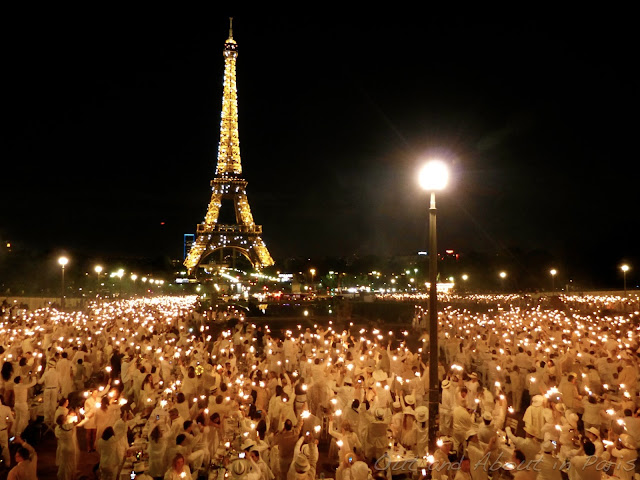 While miniature hot air balloons with candles were released into the night sky, music from one of the three bands had the Parisians kicking up their heels in an impromptu chorus line. Pointing at each other as we sang along with Aretha Franklin's R-E-S-P-E-C-T, Sylvia and I agreed that it was a wonderful night, even though we had to crash the party. With any luck, we'll make the official guest list next year!

If you would like to see more photos of the Dîner en Blanc, please click here for the dinner at the Louvre and here for the one at the Eiffel Tower.

After starting in Paris 25 years ago, there are White Dinners in cities around the world. Click here if you would like more information about one near you. 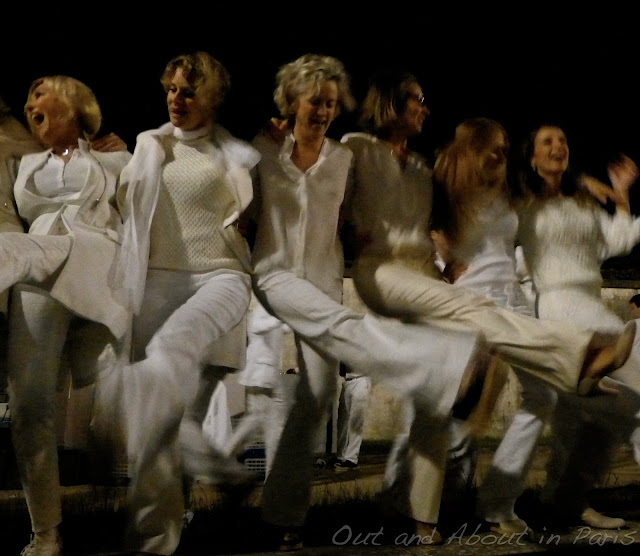