Two books that will take you off the beaten track: "Paris by Bike" and "Discover Paris by Metro" 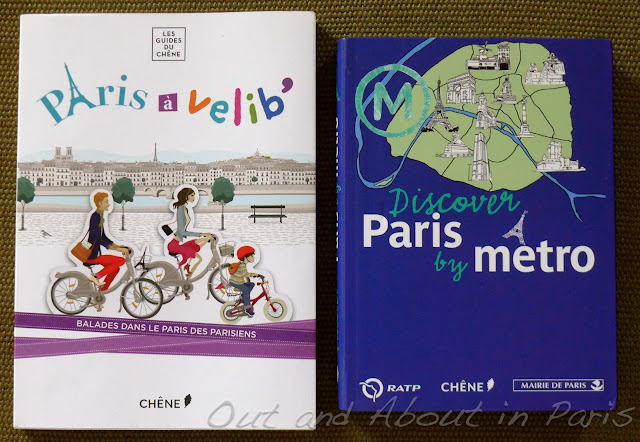 I haven't done a lot of cycling in Paris, mainly because I'm afraid of all the crazy drivers, but one of my best memories is of a magical afternoon when Joseph the Butler, Stéphane and I biked to the Bois de Boulogne for a picnic. Circling around the Lac Inférieur with a backpack full of cheese, foie gras, champagne and a baguette, we paused for a moment to watch a small boy diligently rowing his father across the placid lake and a family playing croquet on the shore. It felt as if we were a million miles away from the hustle and bustle of the city streets.

Following Joseph's rapid lead, we continued down a tree lined path until we reached the Jardin du Pré Catelan, a lush botanical garden right in the middle of the Bois de Boulogne. After agreeing to put some distance between ourselves and the hordes of enthusiastic children at play, we walked our bikes to a large meadow that was miraculously free of people. No sooner had we spread our blanket on the grass, popped open the champagne and taken our first sip of bubbly than a security guard appeared out of nowhere and told us that we would have to move. The grass was resting. Not wanting to argue with the kindly guard, who had indicated that he wouldn't confiscate our bottle of champagne as long as we kept it concealed, we moved to another spot near a gurgling stream. To this day, I don't know if it was the intoxicating smell of foie gras or Joseph's camouflage pants, but something made a female duck take to Joseph like... well... like a duck to water. Much to Stephane's and my amusement, the duck was all over Joseph, nibbling his fingers and nudging his legs with her bill. It was an unforgettable afternoon.

If you would like to create your own memories of cycling in Paris, the English version of Paris by Bike will be available in bookstores and on the internet from July 17, 2013. After purchasing the French version, Paris à Velib' at FNAC yesterday afternoon, Stéphane almost missed our metro stop on the way home because he was so busy planning our next ride. With seven different itineraries and 144 pages full of suggestions for cultural visits, restaurants, shops, bars and cafés along the way, this guide is sure to be one of the best additions to our Paris book collection.

While Stéphane was reading Paris à Velib', I was thoroughly engrossed by my latest acquisition, Discover Paris by Metro. Using the 14 different metro lines as a starting point, this unique guidebook explains the history of each station, offers nearby sightseeing suggestions and gives insider's tips for restaurants, boutiques and entertainment. Checking their recommendations for restaurants near my metro stop, I was somewhat dismayed to see the name of one of my favorite neighborhood restaurants. Perhaps that explains why it has become so difficult to reserve a table!

Here's a short excerpt from Discover Paris by Metro about the history of the Hôtel de Ville metro station:

This is where French history has often played out its dénouement. Previously called Place de la Grève, labourers and others looking for work would come here to get hired. This went on until workers gathered here and challenged their wages and conditions. This gave rise to the French term 'faire la grève', to go on strike. Nothing remains of the original Hôtel de Ville building as it was burnt to the ground in 1871. It was rebuilt after the Paris Commune in 1883 in a pure Renaissance style. This is where Alphonse de Lamartine, politician, poet and founder of the Second Republic, made his appeal to the people , saying: 'Together we will create the most sublime poetry.' It was also here that De Gaulle gave his famous speech on the liberation of Paris, saying: 'Paris! Paris the oppressed, Paris the downtrodden, Paris the martyr! But now Paris is liberated.'