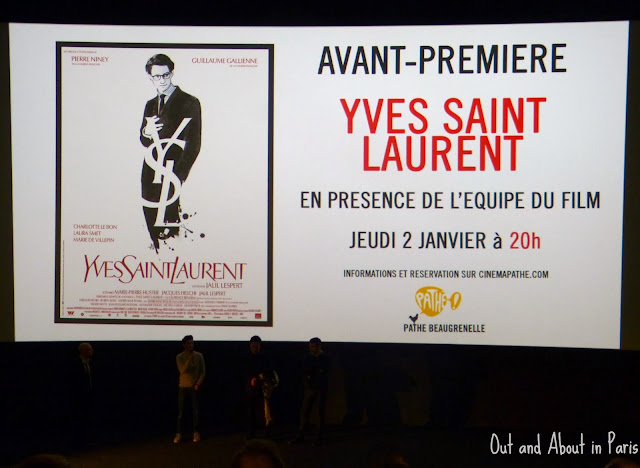 If I could use only one adjective to describe the French biopic Yves Saint Laurent starring Pierre Niney and Guillaume Gallienne, it would be disturbing. During the first part of the film, Saint Laurent is suddenly thrust into the limelight when he becomes the creative director of Dior at the age of 21. When reporters pepper him with questions, "Do you not feel too young to be heading up the largest Haute Couture fashion house in France?" and "Can you tell us what you have in mind for your first catwalk show?", my protective instincts were ignited. Saint Laurent seems too frail, too vulnerable to be asked such probing questions. Yet, in response to a reporter's question about how he feels, Saint Laurent gamely responds, "I can't describe everything I feel, but I'll do my best and to the end". For the remainder of the movie, we watch Saint Laurent strive to keep his promise, even after the great designer's mentally disturbed mind has succumbed to the lure of cocaine and alcohol.


When Stéphane and I went to the advance screening of the movie with the actors and film crew on Thursday evening, Guillaume Gallienne, who plays the late fashion designer's partner, Pierre Bergé, thanked the director for always encouraging the actors by making them feel as if they were doing a tremendous job. His technique paid off because Niney, who at 24 is the youngest actor to be employed by the Comédie-Française, is so convincing in his role as Saint Laurent that an appreciative hush fell over the audience at the end of the screening. We had to process our emotions before we could break into applause.

Fashionistas will be delighted to see the originals of some of Yves Saint Laurent's most sublime creations and sketches from the archives of the French fashion house. Francophiles will love the captivating views of Paris.

Two biopics about the glamorous yet complicated designer have been scheduled to be released over the next couple of years. Yves Saint Laurent is the only one that has received the blessing of Pierre Bergé, Saint Laurent's business and former romantic partner. It opens in theaters on January 8.

Photos taken during the filming of Yves Saint Laurent are currently on display at the Westin Hotel on rue de Castiglione. The exhibition is free and open to the public.