A unique place to sleep:

Nantes, the sixth largest city in France, wasn't really on my radar of places to visit until Stéphane and I made a last minute decision to exchange the crowds on the Champs Élysées for something more peaceful on New Year's Eve. Searching for a hotel that is a destination in itself, I knew that we had found what we were looking for as soon as I read the description of the Radisson Blu Hotel on WineChicTravel's website:

Let’s give a big round of applause to the « Blu » for receiving the chic and prestigious Hotel Property Award 2013. This prize was simply very well deserved.

The magnificent 19th century edifice, originally the Court of Law, has now become the Hotel in the city. Courtroom, Criminal Court, Courtroom Waiting Hall, verdict, cries and gnashing of teeth are now nothing more than old sighs and memories. ... (click to read more)

The Radisson Blu's transformation of the former Palais de Justice, an austere government courthouse, into a luxurious hotel is nothing short of miraculous. From the imposing lobby cheerfully decorated with bright red and fuchsia couches to the former courtroom exquisitely transformed into a stylish restaurant with low hanging lights, Stéphane and I marveled at how skillfully the designers had merged the old with the new. It's exactly what we hoped to do as we bid 2013 farewell and welcomed 2014.

Fortunately, the thoughtful details extended to the guest rooms because the pouring rain and holiday closures didn't give us much incentive to leave the hotel. While watching back-to-back episodes of "The Good Wife", an American television series about a woman lawyer that paired nicely with our accommodations, Stéphane and I were thankful for the comfortable bed and handy Nespresso machine in the room.

When we finally emerged from our cocoon, the hotel's receptionists graciously helped us finalize our sightseeing plans by calling to confirm the schedule of the shuttle boat to Trentemoult, a colorful fishing village, and printing information about other noteworthy sights in Nantes.

An unforgettable place to eat:

Stephane's father has an uncanny memory for restaurants. When we called to wish him a happy new year and mentioned that we were in Nantes, Werner immediately suggested that we go to La Cigale. Opened on April 1, 1895 and classified as an historic monument in 1964, La Cigale is ornately decorated with tile frescoes on the walls, carved wooden reliefs above the doors and painted wooden beams on the ceiling. A large wooden cicada, the restaurant's mascot, gazes down on diners enjoying towering platters of fresh seafood and hearty bread slathered with hand pressed Brittany butter. While memories of my crab and avocado starter, savory scallops and decadent profiterole and ice cream dessert will eventually fade with time, I'll long recall the amazing Belle Époque decor of this traditional French brasserie.

Click here to see an album with more photos of Nantes.
Next post: Things to see in Nantes. 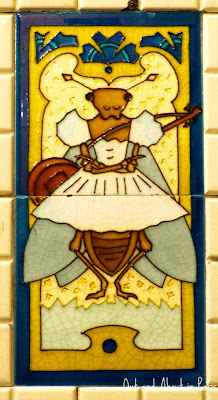 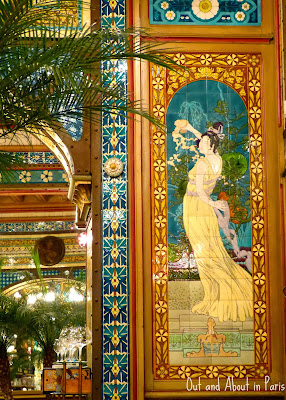