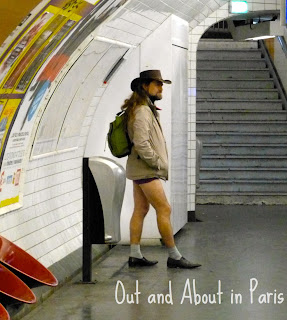 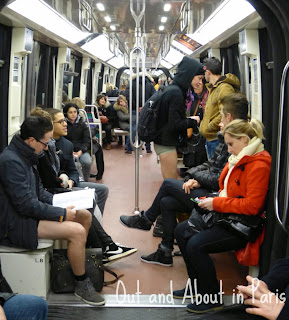 Metro line 1 is notorious for pickpockets. Every couple of stops, there's a public announcement in at least four different languages warning passengers to keep a close eye on their belongings. If you happened to be riding the metro from Charles de Gaulle - Étoile in the direction of Bastille at approximately 3:45 pm yesterday, it might have occurred to you that the pickpockets had been busy stealing more than just wallets. In honor of the third annual No Pants Subway Ride in Paris, many of the passengers were traveling trouserless. While participants without bottoms read newspapers, studied route maps or nonchalantly chatted on cell phones, astonished passengers tried their best not to stare at all the exposed limbs in the middle of winter.

The No Pants Subway Ride is an annual event staged in more than 60 cities in over 25 countries around the world. Originally created as a prank by Improv Everywhere in New York City in 2002, the idea has grown into an international celebration of silliness. The concept is simple: random passengers without pants board a subway car at different stops. They're normally attired on top and scantily clad on the bottom. Yet, all of the participants act as if it's just another regular commute. If they're questioned about why they're not wearing trousers, they're to respond that they forgot them. As the number of pantless passengers exceeded the number of those wearing trousers by the end of the route yesterday, I'm sure that more than a few tourists will go home and tell their friends, "You won't believe how they dress in Paris!"