As a preface to this post, I should explain that most of my formative years were spent in Memphis, Tennessee. Aside from being the "Home of the Blues", this southern city is also known as the "Birthplace of Rock 'n' Roll". Elvis Presley used to live there in a white-columned mansion called Graceland. After his death on August 16, 1977, Elvis fans and impersonators from around the world started making annual pilgrimages to Memphis. Every August, Beale Street overflowed with men wearing sequined costumes singing "All Shook Up" and "Love Me Tender". Whether you were an Elvis fan or not, it was always a rockin' fun time to be in Memphis. 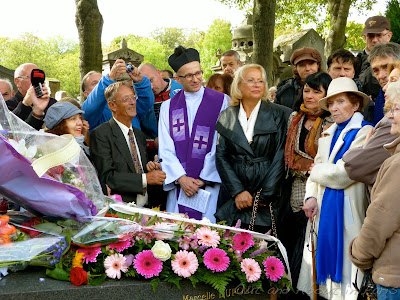 Knowing that Edith Piaf is as beloved as the "King of Rock 'n' Roll", I anticipated that fans would be singing "La Vie en Rose" and "Je ne Regrette Rien" on the streets of Paris for the 50th anniversary of Edith Piaf's death. I just had to find them.

As the exact date of Piaf's demise is disputed, I started my quest on Thursday, October 10 with a gathering of "The Friends of Piaf" next to her tomb in Père Lachaise cemetery. While we didn't sing any of Piaf's famous melodies, a priest was on hand to say The Lord's Prayer and to invite everyone to a memorial mass at Saint-Jean-Baptiste de Belleville, the same church where Piaf was baptized Edith Giovanna Gassion in 1917. How different, I thought, from when Piaf was denied a funeral mass by the Roman Catholic Archbishop of Paris and the Vatican declared that she had lived her life in a "state of public sin" and condemned her as an "idol of prefabricated happiness."

Thanks to a chance encounter with my friend Nancy's "Paris Greeter" in Père Lachaise cemetery, my next destination was "50 Years Already: The Paris of Piaf", an exhibition devoted to Edith Piaf in the town hall of the 20th arrondissement. Perusing photos of Edith from the time she was an innocent young girl with an over-sized white bow in her hair to when she was a middle-aged woman ravaged by drugs and disease, I was awed by the trajectory of her life. How had a waif born in the gritty district of Belleville created such a long lasting impression on the world? It was her remarkable voice. The one that sends shivers up your spine as soon as you hear the opening notes of "Je ne Regrette Rien".

While it's no longer possible to see the "Little Sparrow" in concert, I decided to do the next best thing. On October 11, the date on which the official announcement of Edith Piaf's death stunned the world, I went to Caroline Nin's "Hymne à Piaf". As Nin recounted the stories behind some of Piaf's most famous songs, I felt myself magically transported back to another time. Through her talented performance, the passion and anguish of Piaf's life was palpable in the intimate setting of the Essaion Theatre. If you're searching for "La Vie en Rose", don't miss Caroline Nin's show!

To commemorate the 50th anniversary of Edith Piaf's death, Caroline Nin organized two very special evenings at L'Excelsior after her show, "Hymne à Piaf" on October 10 and 11. Here's a video taken during one of my most memorable evenings in Paris. Click on the arrow and sing along: