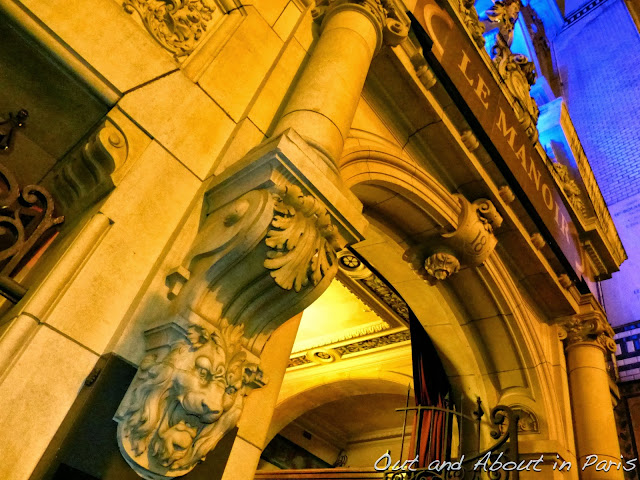 In between sipping my coffee and munching a croissant, I've been frantically scanning Le Monde and Le Figaro to see if either of those newspapers has an article about a missing Finnish family. Stéphane and I formed a tight group with the father, mother and teenage daughter at Le Manoir de Paris last night. Alternately screaming and laughing, the five of us clung together as we made our way past the ghouls of Père Lachaise Cemetery, the ghost of the Tuileries Garden and the flesh eating lunatics in the asylum, but we lost sight of the family when a ghastly man in white ordered Stéphane and me to proceed down a long corridor. When I protested that we were with the Finns, the man snarled and said that he wanted to play with them for a little while longer. The teenage daughter's spine tingling screams followed Stéphane and me as we made a hasty retreat to the exit. Since we never saw the family again, I fear that their vacation in Paris may have come to a grisly end in the mystifying maze of Le Manoir de Paris. 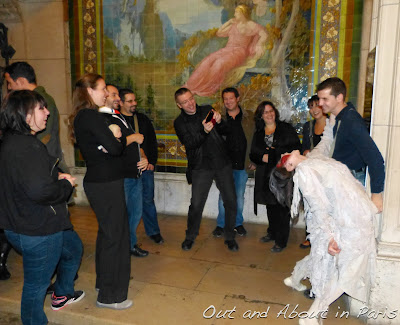 If you're someone who likes a "treat" along with some "tricks" on Halloween, Le Manoir de Paris is a haunted house located in a former ceramic showroom that's a protected historical monument. While standing in line, be sure to admire the tile frescoes in the courtyard as ghouls pretend to strangle innocent bystanders. Don't let the blood dripping from the monsters' wounds deter you from asking them to pose for photos in front of the beautiful murals signed by Arnoux et Guidetti. They'll happily oblige.

But their demeanor quickly changes as soon as a vampire with a blood smeared mouth straps a blue glow stick around your neck to indicate that you're an English speaking guest and yells, "Fresh meat!". Once the heavy wooden door clanks shut behind you, you'll spend the next 45 minutes to an hour passing through a series of rooms where professional actors bring 13 Parisian legends to life ... or, perhaps "death" would be the more appropriate word. If you would like to know more about the young woman who was found stabbed to death on line 8 of the Paris metro or the bloody baker who sold his customers pâté made from finely chopped human flesh, I encourage you to print a copy of the legends from Le Manoir's website because the diabolical demons don't take kindly to questions.

Ironically located on rue de Paradis, (Paradise Road), Le Manoir de Paris is open on Friday, Saturday and Sunday evenings throughout the year. The busiest period is from October 18 to November 11. While Le Manoir welcomes children of all ages, their website states that it's not recommended for children under the age of ten. And, I agree. It's also not recommended for women who are pregnant or for people with a history of heart problems, seizures or poor general health. In case you're worried about having too close of an encounter with a French Dracula, Phantom of the Opera or Hunchback of Notre-Dame, it's helpful to know that the actors are not allowed to touch the visitors, although they do get chillingly close!

Le Manoir de Paris
18 rue de Paradis
75010 Paris
Admission: 25 euros for adults. Yes, it was expensive but worth it for a Halloween treat. Plus, the building is exceptional and there are a lot of actors inside the mansion. 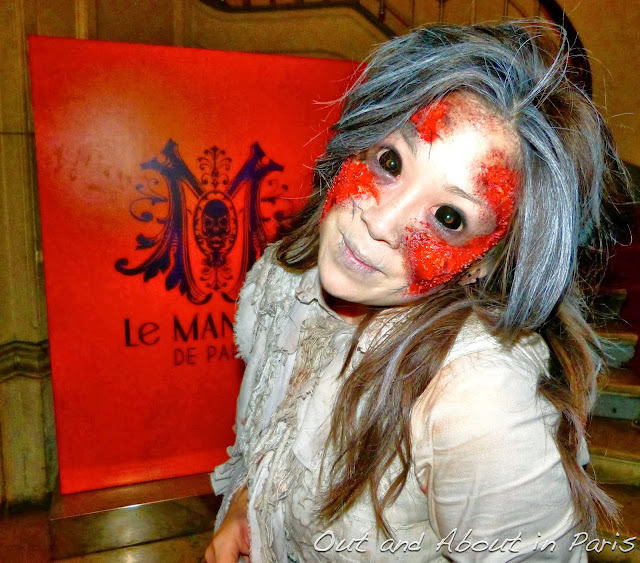