How long would you wait in line? "Tour Paris 13", the largest street art exhibition in the world 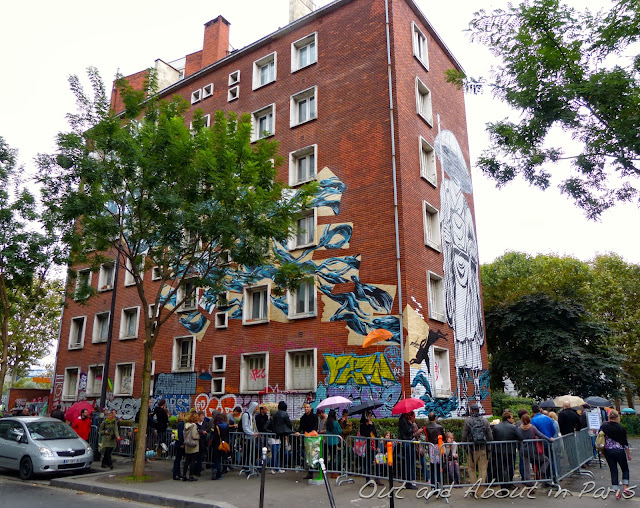 Living in Paris has forced me to confront some difficult questions, ones that I haven't had to ask myself in other places. Questions such as "How long am I willing to stand in line for a falafel, a movie, vegetables from my favorite vendor at the market, or the opportunity to ascend to the Eiffel Tower?" Answers range from approximately 20 minutes for a falafel (yes, they're really that good!) to 40 minutes for the Eiffel Tower. Through rigorous training on an almost daily basis, my endurance for standing in line has increased dramatically over the past 2 1/2 years. But I'm still not sure that I'm up for the ultimate challenge -- standing in line for three to four hours to see the largest street art exhibition in the world.

In my naiveté, I proposed to Nancy that we go to "Tour Paris 13" last Wednesday afternoon. The way I saw it, we would arrive shortly after lunch, stand in line for an hour at the most, take lots of photos of the 36 apartments that have been painted by 100 street artists and be home in time for dinner. Instead, there was a line of people snaking its way around the entire apartment building. Some of the people were chatting, others were reading books and quite a few were playing games on their phones.

"Tour Paris 13" is an exciting concept. Take a low-income housing project that was deemed too expensive to renovate, invite 100 street artists from around the world to paint the interior of the 10-story building, keep the entire project a secret until the day that it's unveiled to the public, welcome everyone to see the world's largest street art installation and then demolish it. The clock is ticking. At this very moment, you have 16 days, 13 hours and 21 minutes before the doors of this ephemeral exhibition close forever. In keeping with the essence of the street art movement, "Tour Paris 13" is free and open to all. The question is, how long are you willing to wait in line to see it? One of the security guards advised me to arrive at least three to four hours before the doors open.

Click here to see more photos of the outside of "Tour Paris 13". To see pictures of the inside, here's a a blog post with lots of photos taken by "The Savoir Faire Paris Team". The work that I would most like to see is the recreation of the ceiling of the Sistine Chapel that is only visible when you look at it via a small mirrored ball.

If you're a fan of street art, the city of Paris has just released "My Paris Street Art". It's an interactive app that allows users to discover more than 100 works in Paris and share photographs of street art. For a street art app with worldwide coverage, check out Urbacolors. 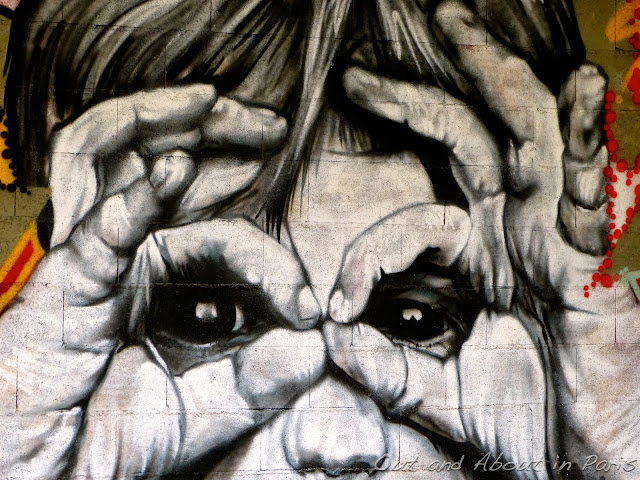