Talking with L'Espalier's Louis Risoli, one of the first cheese experts in the USA (Part 1) 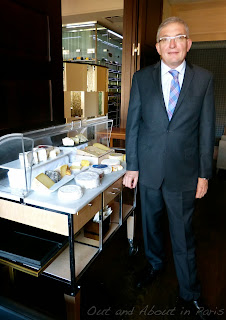 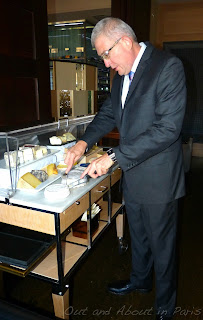 Ever since Penny of BostonZest first showed me the impressive cheese cart at L'Espalier, I've been hoping to have the opportunity to talk with maître d' and fromager Louis Risoli about his recent qualification as one of the first cheese experts in the United States. I was elated when he agreed to take a break from overseeing one of Boston's best fine dining establishments to chat with me about cheese.

I'm curious about the "Certified Cheese Professional" qualification. Is it comparable with the designation "Meilleurs Ouvriers de France" (Best Craftsmen in France)?
I guess it is to a degree. The American Cheese Society (ACS) came up with the Certified Cheese Professional Exam (CCPE) to encourage improved standards of comprehensive cheese knowledge and service in the cheese industry. The ACS gave the first exam in August last year and another exam this year. Eventually, they hope to give it twice a year.

If someone is interested in taking the exam, what are the necessary qualifications?
They have to have about 4,000 hours of documentable work experience, paid or unpaid, in the cheese profession during the last six years.

How did you get your experience?
I got it all by working at L'Espalier. When I first came here 31 years ago, there was a small cheese program in place. It was all European cheese. There wasn't really much in the way of American cheese then. We offered about 10 different cheeses on any given night. After working here for about five years, I took over the program almost by happenstance. I found that I had a head for cheese, or perhaps I should say a nose for cheese. But most importantly, I was interested in cheese.

With regards to cheese, what changes have you noticed during the last 30 years?
Tastes have changed dramatically. Americans are a lot more open to new ideas and tastes. There has been a cheese revolution in this country. We're very fortunate here in New England to be living in one of the hubs of cheese making.

Does cheese that's imported from France have to be pasteurized?
No, it does not. The rule is that raw milk cheeses have to be aged for more than 60 days to be legally sold in the USA. That applies to cheeses that are both made in this country and that are imported. Therefore, it has become much easier for European cheese makers to pasteurize the cheese if they're sending it to this country. For soft cheeses they don't have any other option because your average small cheese isn't going to make it to 60 days. Camemberts and Bries will almost always be made from pasteurized milk if they're imported.

Is there a cheese that you would like to bring to the USA but that you think wouldn't be appreciated by your customers? Maybe Mimolette?
I don't usually have Mimolette at the restaurant. There was some sort of a health scare about it in Boston recently. It would probably be something as basic as an unpasteurized Brie or Camembert. Wouldn't it be wonderful if we could bring a real raw milk version to this country?

How much of your time do you spend visiting cheese makers in Europe and the United States?
Not nearly enough. I probably get to Vermont more often than anyplace else. I like to visit farms in New England so I do that with some frequency. I haven't been to Europe in about two years. I've probably traveled in Italy more than I have in other countries in Europe.

What is your dream cheese destination in Europe?
You know where I wish I was right now? At the huge Cheese Festival in Bra, Italy. It's a small town in the Piemonte region where to my understanding about 100,000 people are gathering this week to taste cheese from all around the world. There are definitely more Italian cheeses than anything else at the festival but there will also be American cheese makers showing their cheeses.

Is there a book that you recommend to people who want to learn more about cheese?
Yes, I like Max McCalman's books a great deal. The newest one is called "Mastering Cheese". It's the most in-depth book but it's not so in-depth that an amateur couldn't pick it up and be fascinated and learn an awful lot.

And now for a question about etiquette. In a restaurant, what's the socially acceptable number of cheese selections to take from a cheese cart. In Paris, I usually ask for three to four different kinds of cheese.
Oh, I guess that varies. If I'm putting together a plate as part of our tasting menu, I usually include six to eight different kinds of cheese. I like to include all three milks - cow, sheep and goat - and different styles. My one piece of advice to people selecting their own cheese is to sample a variety. If a guest's selections are identical, I'm almost always going to give them a bonus cheese, something that I think they should try.

L'Espalier's cheese cart features about 30 different kinds of cheese. Which countries do they come from?
Most of them come from the United States. Probably two-thirds to three-quarters are New England cheese and the rest are from other parts of the country. I love Italian cheese so I always have a few Italian cheeses, sometimes more than a few. And it's always rounded out with something French, Swiss and often Spanish.

As a Swiss-by-marriage, I have to ask which is your favorite Swiss cheese?
That varies but lately I've been loving Chällerhocker from the canton of St. Gallen. It's made by Walter Ross. The name means "sitting in a cellar" because it's aged for ten months.

Is there anything else that you would like to add?
It has been fairly exciting to grow with the cheese revolution in New England, to be able to support so many wonderful local cheese makers and to watch as they improve their craft. American cheese has really caught up with European cheese, not in every instance but they've learned really, really quickly. Five years ago, almost no one was making washed rind cheese in this country and now there are unbelievably fabulous washed rind cheeses, incredible Alpine style cheese. It's different than what you find in Switzerland but really, really good. One of my favorites is Pleasant Ridge Reserve from Uplands Cheese Creamery in Wisconsin. Here in New England, there's Tarentaise from both Spring Brook Farm and Thistle Hill Farm.

In addition to being a Certified Cheese Professional, you're also an artist.
Yes, I'm a painter. Some of my work is at Gallery Naga on Newbury Street. I had a one person show there last January.

Talking with L'Espalier's Louis Risoli, one of the first certified cheese experts in the USA (Part 2) 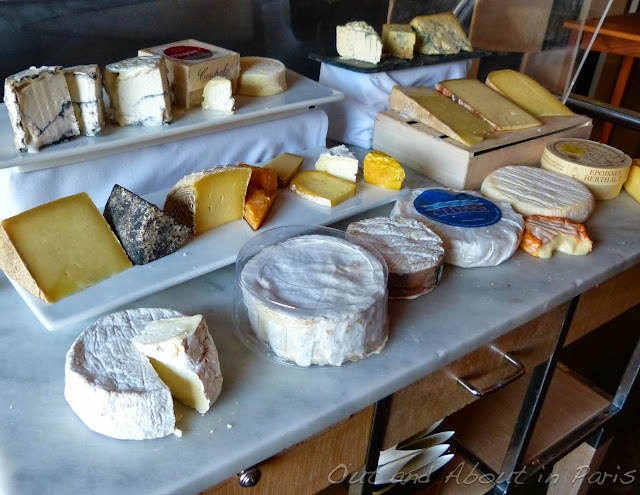