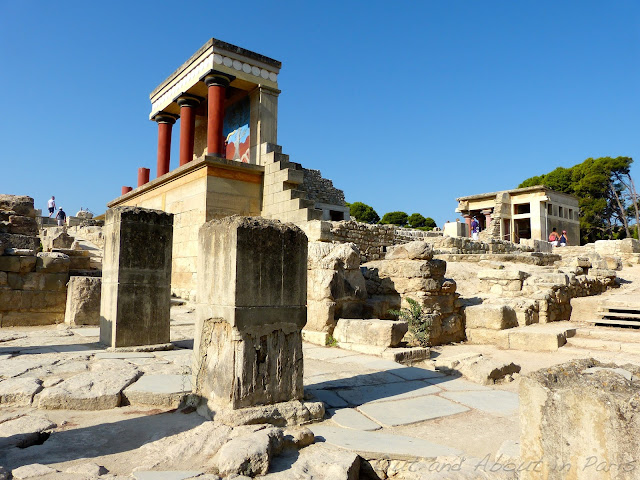 Just in case you're thinking that I've started referring to myself as "La Parisienne", I haven't. But living in Paris has equipped me with a certain aggressiveness that came in handy while visiting Knossos Palace, the most visited monument in Crete.

Up early to watch the sun cast its first rays on the largest Greek island, Stéphane, Sara and I sprinted down the gangway as soon as the Noordam docked in Iraklion, Crete. Like determined Parisians with a metro to catch, we maneuvered past the taxi drivers at the port who were charging 50 euros to transport passengers to and from the archaeological site of Knossos and hurried to the bus station where we found a driver willing to take us for 10 euros. As the taxi veered around a steep curve in the road, I glanced out the back window to check if the tour buses full of passengers from the cruise ships were gaining on us. By my calculation, we still had about an hour before the hordes arrived.

The line in front of the entrance to the Mineon palace had just started to form when we leapt out of the taxi. Stéphane's job was to buy tickets while my more herculean task was to strike a deal with a local tour guide. Resolute in their knowledge that swarms of tourists would soon appear on the horizon, the Greek guides refused to accept anything less than 30 euros per person for a group of 10 people. Wondering how quickly I could round up seven other Anglophones, my head swiveled around when I heard a group of French people behind me finalizing a deal. Without stopping to think, I boldly, and somewhat rudely, asked if we could join their group of ten.

As soon as we finished saying "bonjour", our guide directed us to a shady spot under a large pine tree near the "Royal Road". It was barely past 9:00 am and already the stone ruins of the  palace commissioned by King Minos were emanating enough heat to bake a baguette. 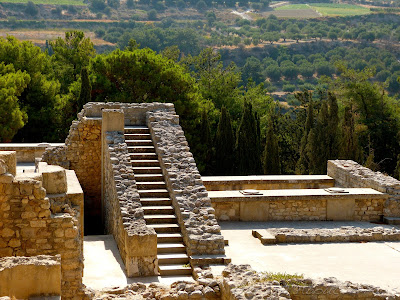 According to ancient Greek mythology, Knossos Palace was deliberately designed with such complexity that no one would ever be able to find its exit. Upon its completion, King Minos imprisoned Daedalus, the architect to ensure that he wouldn't reveal the design of the palace to anyone. Daedalus, who was also an inventor, built two sets of wings to fly out of the palace with Icarus, his young and impulsive son. When Icarus ignored his father's advice not to fly too close to the sun, the boy fell to his death in the Aegean Sea. Knossos is also associated with the legend of the Minotaur, the creature with the head of a bull on the body of a man, that supposedly lived in a labyrinth beneath the palace.


Normally people enter Knossos from the west and move in a clockwise direction but in a brilliantly strategic move, our guide started our tour on the other side. For the first part of our visit, we had unobstructed views of the multi-storied buildings excavated by Arthur Evans. While the British archaeologist is not responsible for discovering Knossos or Minoan civilization, he did give it its name. In 1894, Evans visited Crete and the site of Knossos for the first time. Three years later, he purchased the land on which the palace was located and spent the rest of his life excavating its ruins and interpreting them.


And "La Parisienne? After our tour guide showed us a photo of her, we had the pleasure of making her acquaintance at the Archeological Museum in Iraklion. It's where you'll find many of the colorful frescoes and statues removed from Knossos Palace, along with an amazing collection of ancient jewelry, vases ornate drinking vessels and the famous Phaestos Disc.

In addition to visiting Knossos Palace and the Archeological Museum, we wandered along Korai Street with its hipster cafés and bars before having a delicious lunch at the Amateur Fisherman's Association Restaurant.

While at Knossos, our guide pointed out cement columns and other structures built by Evans and mentioned the ongoing debate about his reconstitutions of the palace. If you would like to know more about "Knossos: Fakes, Facts, and Mystery", please click here to read an extremely informative article from The New York Review of Books. With special thanks to Anne for posting the link on Facebook.