Dreams do come true - Meeting "Just Another American in Paris" for lunch.


Anne of "Just Another American in Paris" is witty, perceptive, funny, honest, adventurous and exactly the kind of person you hope to cross paths with if you're an expat in a foreign land. Her blog was my lifesaver during the early days of our move when I didn't know diddly squat about living in Paris. Equipped with information gleaned from her posts, I felt like an insider when I told Stéphane about SOS Médecins, the doctors that make house calls, or that the Hôtel de la Marine, the headquarters of the French navy, was for sale because the navy was moving to the 15th arrondissement after spending 220 years in luxurious digs at the Place de la Concorde. Even though it was a virtual, one-sided relationship, "Just Another American" (I never presumed to call her Anne!) was there when I needed her most, every morning while I drank my first cup of tea and mentally prepared myself to start another day on my own in the big city.

So, imagine my disappointment when I realized that "Just Another American" was leaving Paris just as I was getting settled. Poof! Gone were my fantasies of a chance meeting in Tang Freres or Notre Dame. I would never have the opportunity to meet the woman I had grown to admire. Or, at least that's what I thought until we arranged to have lunch together in Washington DC last Thursday. Feeling giddy and nervous with excitement, I pulled open the door of the small Ethiopian restaurant and saw Anne waving her hand in welcome, just as her blog had greeted me when we first moved to Paris.

Thanks for providing me with the information I needed to start my new life in France, Anne, and for being my blogging mentor. You'll never be "just" another American in Paris to me!

After a much appreciated vacation in the USA, Stéphane and I landed at Charles de Gaulle airport yesterday morning. As soon as my internal clock adjusts to European time, I plan to return to blogging on a more regular basis. In the meantime, please check out my recently created Facebook page to see photos of things that catch my eye and links for interesting articles about Paris. Out and About in Paris on Facebook. 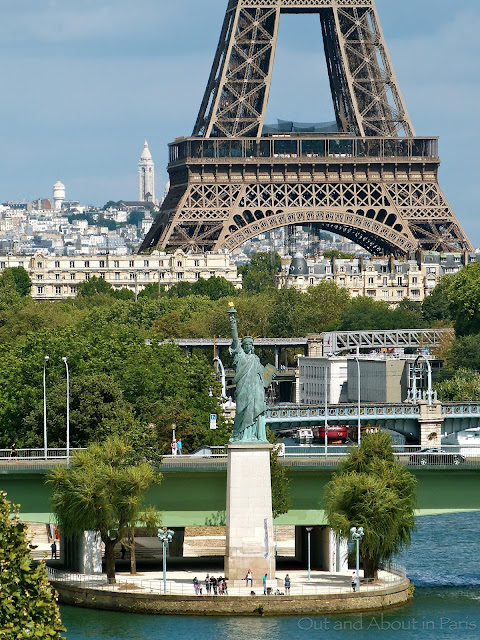