Discover something new in your city! The National Maritime Museum.

Aside from exposing you to new ideas, people and places, one of the best things about travel is that it opens your eyes to the attractions of your own town. Case in point - I pass the National Maritime Museum at Place du Trocadero a couple of times a week and have never had the slightest inclination to go inside the uninspiring building because views of the Eiffel Tower or thoughts of an afternoon treat at Café Carette always seem more enticing. Even the colorful signs for the current exhibition, "PHARES" ("Lighthouses") weren't enough to lure me across the threshold.

All of that changed during our recent trip to Martha's Vineyard when I learned that Paris was the lighthouse capitol of the world in the 19th century. Suddenly, I wanted to know more about the Fresnel lens, the French invention that has guided ships safely past the treacherous rocks lining the shores of Massachusetts since the mid 1800s. And what better place to start my research than the National Maritime Museum! 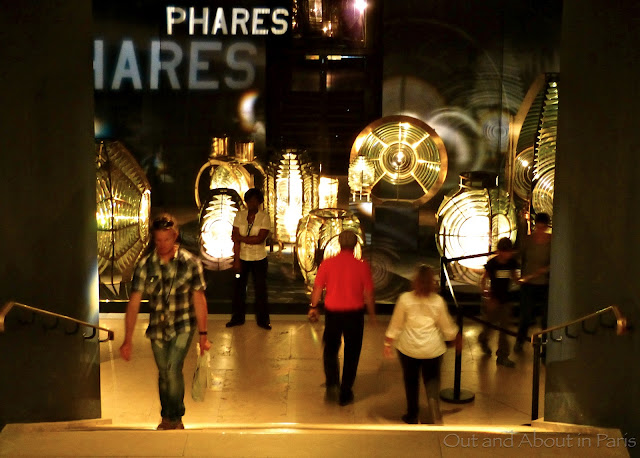 Making my way past gigantic seascapes, Napoleon I's opulent imperial barge and wooden models of ships, I was captivated by the magnificent pulses of light emanating from the entrance to the "Lighthouse" exhibition. As visitors are not allowed to take photographs, I focused all of my attention on the displays and learned some interesting facts. Since there's no way that my jet-lagged brain is going to find an eloquent way to move one from to another, I'm taking the easy way out and using bullet points:

With sections on Cordouan Lighthouse, Fresnel lenses, the history of lighthouses in Paris, the architecture of lighthouses, the responsibilities of a lighthouse keeper, maritime security, the authors who were inspired by lighthouses and interactive games for children, this exhibition is a "must-see" for anyone interested in lighthouses. After making the mistake of going without my husband, I'll be returning with Stephane in the very near future.

Good to know: Be sure to get a free audio guide because all of the signage in the exhibition is in French.

In the meantime, I plan to visit a lighthouse in a very unusual location this weekend. If you can guess where it is, I'll treat you to a glass of champagne if/when you're in Paris. There is a clue in the previous sentence and on "Out and About's" facebook page. [Edit: Congratulations to Gwan for answering correctly in an amazingly short amount of time! The clues were "glass of champagne" and a photo of a champagne cellar in Reims because the lighthouse is located in the middle of the vineyards in Verzenay in the Champagne region of France. Isn't that an odd place for a lighthouse? I'll tell you why it's there in a post next week.]