Paris celebrates the 100th anniversary of the Tour de France 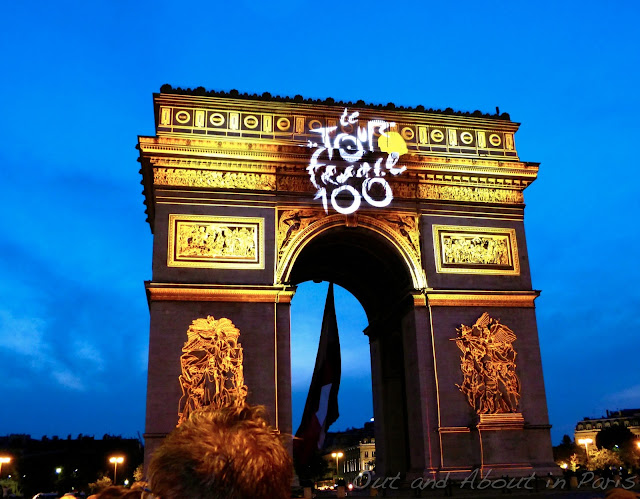 Unlike last year, when I was completely caught off guard by the cacophony of noise when the Tour de France passed under our balcony, I began plotting and planning where to watch the finish of the 2013 race shortly after it started on the French island of Corsica in June. With a mere 21 days to develop my strategy for viewing the 100th anniversary celebration of cycling's most grueling race, I vacillated between watching the riders pass through the courtyard of the Louvre for the first time in history or seeing them sprint up the Champs Elysées.


My excitement increased when Stéphane, who works for one of the race's corporate partners, rode with the Tour's caravan during Stages 6 and 7. Suddenly, I was receiving a flurry of text messages from my husband about the incredible speeds that the riders maintain while cycling through the French countryside and over steep passes. While Stéphane's enthusiasm didn't prompt me to turn on the television and actually watch the race, I did feel compelled to learn a little bit more about the significance of the colorful jerseys. Most interestingly, the origin of the yellow jersey worn by the overall leader comes from the distinctive yellow newsprint of L'Auto, the newspaper that organized the early races. The green jersey is worn by the best sprinter, the polka dot jersey designates the best climber and the white jersey is awarded to the highest ranked rider who's 25 years old or under. 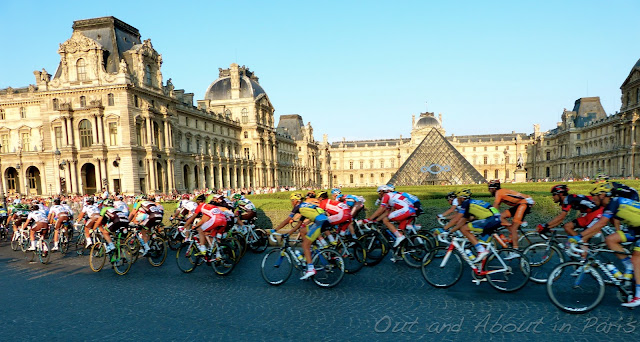 When the cyclists finally arrived in Paris after pedaling over 6 mountain, 5 hilly and 7 flat stages, they passed the cobblestone courtyard of the Louvre in a blur of color. As my friend Carolyn reported in an email, "Abigail and I were standing by a couple from Texas as the riders passed by in a flash. None of us realized it would be so quick. We got a couple of snaps but the man next to us was still focusing his camera and missed everything. Abigail and I decided it would make a good advertisement for the versatility and dependability of the iPhone. " 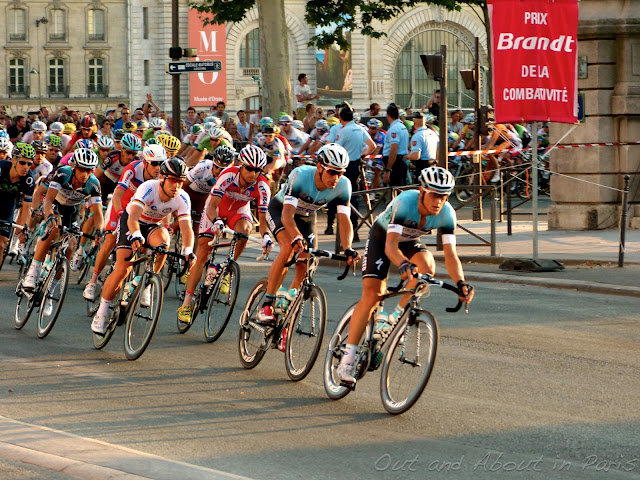 Knowing that the cyclists were only scheduled to ride through the courtyard of the Louvre one time, I ran towards the Tuileries Garden to catch another glimpse of them as they veered around the corner at breathtaking speeds. 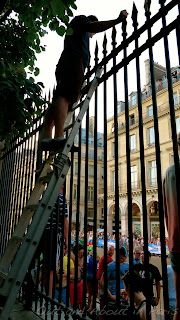 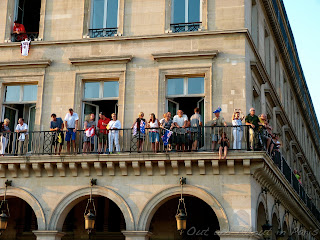 Other people, like the man who came equipped with a ladder and the fans who booked rooms with balconies overlooking the at the Westin Hotel, had prime spots for watching the cyclists whiz down the rue de Rivoli.

When no one invited me to join the party on their balcony, I switched into high gear (or would that be low gear?) and hightailed it over to the Champs Elysées to catch the grand finale at the Arc de Triomphe. It was spectacular!

More photos of the laser light show on the Arc de Triomphe and the arrival of the Tour de France in Paris. 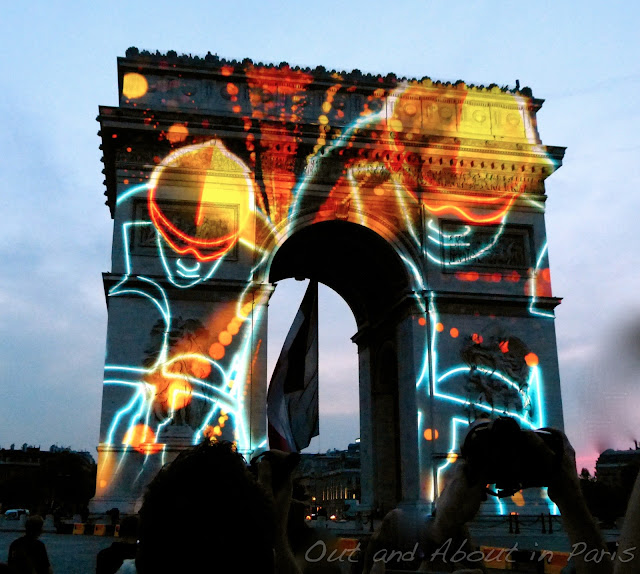