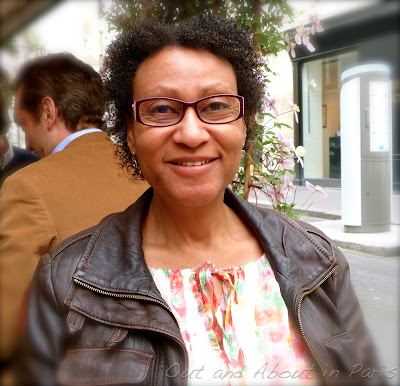 In previous posts, I've written that it's impossible for two people to have exactly the same Parisian experience. My observations are going to differ considerably from those of a French person, a tourist or even another American expat, which explains why Julia Browne, the founder of Walking the Spirit Tours, captured my attention during her recent talk at the American Library. After recounting stories about Ada "Bricktop" Smith, the singer for whom Cole Porter wrote "Miss Otis Regrets", and the World War I jazz-playing Harlem Hellfighters, who are credited with introducing American jazz to France, Browne invited the audience to experience the city in a completely different way by taking a "Black Heritage Paris" tour. Curious about Julia's own impressions of France, I asked if we could meet for an interview.

What brought you to Paris, Julia?

Looking back, I've always been a Francophile. At the age of 15, I told my parents that I was going to marry a Frenchman. Since I knew I wanted to travel, I went into the tourism industry, moved to Montreal to improve my French and eventually got a job as a flight attendant. After four years with Air Canada, I took a sabbatical to do a year abroad program in Aix-en-Provence. That's where I met my husband. We spent five years together in Montreal, where I started working in the film industry, before moving to Paris in 1990.

During your talk at the American Library, you mentioned that African Americans, like Josephine Baker and author Richard Wright, felt truly free in Paris for the first time in their lives because there wasn't racial segregation. How did you feel when you arrived?

I thought it was different for me because I had never lived in the United States. I was born in England and moved to Toronto when I was eight but I experienced discrimination in both places. Once you're out of your country, you notice things differently. I began to realize we all had developed the same feelings of defensiveness. What did strike me pretty early on was that as soon as I opened my mouth and French people heard my accent, it was being Canadian/American that made people curious and chatty. People spontaneously started talking about Josephine Baker, as if I were a distant cousin of hers. I also noticed that as North American blacks, we were treated with higher regard than other Diaspora members.

What prompted you to create Walking the Spirit Tours, the first company to focus on African American history in Paris?

When I moved to France, I carried over my film promo and production work from Montreal. It was while working as a researcher and production assistant on PBS's documentary Richard Wright: Black Boy that I was able to see film archives about the author's life. I also took classes on folklore and black literature with Professor Michel Fabre, founder of the Centre For African American Studies at the Sorbonne. He had written a book called A Street Guide to African Americans in Paris that I carried around with me. One day, I discovered that Langston Hughes used to live in a building in my neighborhood, one that I walked past all the time. This made such a big impression on me that I started telling my friends about what I had learned. They asked me to show them around and it gradually grew into a business in 1994. Now all kinds of people, from families to university groups, take our tours.

Even though I love to educate people, giving tours is not something I ever dreamed of doing. But sharing what I know makes me feel as if I'm continuing the work of the people who came before me. By telling their stories, it validates their experiences and helps keep them alive. It's my way of bringing these African Americans back into the limelight. For the most part, there aren't any plaques or other signs on the buildings where they used to live.

If you had to select just one African American, whose story would you want to tell?

That's like trying to pick between my children. I can't do it! But if I had to choose, it would be the African American women artists. Many of them came of age while they were in Paris. It was a real turning point for them. They were able to find their voices here. Then they carried that strength back to the United States and built on it.

Speaking of your children, please tell me about your two daughters.

I joke with my daughters and tell them that I gave them the greatest gift of all -- they were born in Paris, France. Weird as it sounds, I wanted to have French children and am pleased that they developed French sensibilities, an early appreciation of the finer things in life.With so many museums at their fingertips, they've had access to art and beauty in every day things from an early age and even the food they were served in pre-school was inventive and good.


What's the best part of your job?

It's when I see visitors integrate the stories that I tell them into ideas about their own possibilities. The stories present evidence that there are other ways of living. It's also a question of pride, of knowing that your culture influenced so many others, like the African American jazz musicians who inspired Picasso and Matisse.

Along with two other tour companies, Walking the Spirit Tours was recently featured in the CNN article, African-Americans in Paris: 'It's always been about freedom for us'.

Julia has also recently partnered with award-winning documentarian Joanne Burke and writer/cameraman David Burke to create "When African Americans Came to Paris". The set of DVDs offer a fascinating look at black Americans in Paris in the early 20th century.