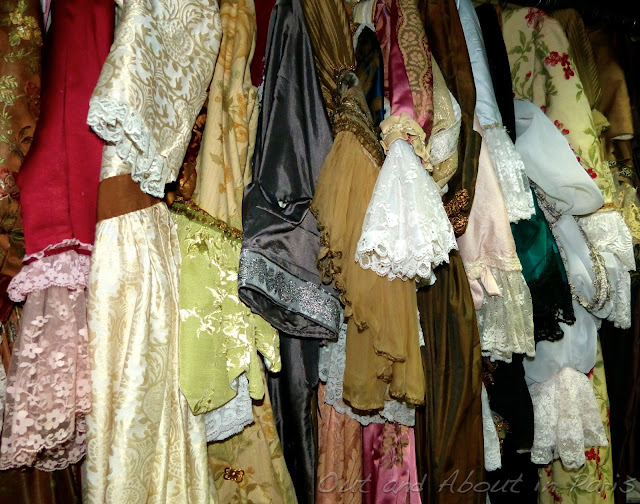 Today's post about about our trip to Belgium has been preempted by some breaking news. It's only twelve more days until the Journée Grand Siècle at Château de Vaux le Vicomte!

Worried that our options would be limited if we waited until the last minute to select our dresses, Sara convinced me that we should go to the costume store this afternoon. As soon as my eyes adjusted to the dim light in the front room, I was momentarily surprised to see a man in a shirt with ruffled sleeves and breeches trying on a pleated coat. We were definitely in the right place. The 17th century! After enquiring about our budget and giving us several dresses to try, the salesman escorted us to a large fitting room where there was a woman from the early 1900s admiring herself in the mirror.

Next came the hard part, figuring out how to dress ourselves. Believe me, it's not as easy as it sounds. First, there were the side hoops or paniers, which meant that we required three times as much space as normal. Next, there were all kinds of hooks, laces and loops to fasten. After dealing with those complicated thingamajigs, it's not surprising that I put the first dress on backwards and didn't even realize it until I had an epiphany while helping Sara fasten the ribbons on the bodice of her dress. As we quickly discovered, there are definite advantages to wearing jeans! 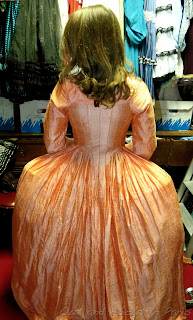 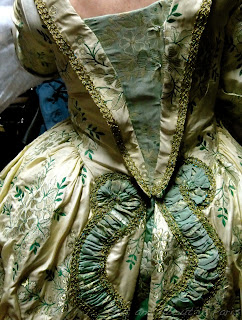 After 90 minutes of trying on dresses reminiscent of those worn by Kirsten Dunst in Marie Antoinette, we moved on to selecting our wigs. Again, it wasn't easy as it sounds. When the salesman presented me with the first wig, one with two points that resembled horns, I laughed out loud and asked if he was serious. He was. I decided to go with a less-fashionable model, a powdered one with an updo and three curls dangling down the back.

If you would like to stroll back in time to the 17th century and picnic on the lawns of the Château de Vaux le Vicomte, mark your calendar for Sunday, May 26. While it isn't necessary to wear a costume, there will be ones for rent at the château. Please click here for additional information about the Journée Grand Siècle. Perhaps I'll see you there. I'll be the one with my dress on backwards!