What are the differences between the César Awards and the Academy Awards? 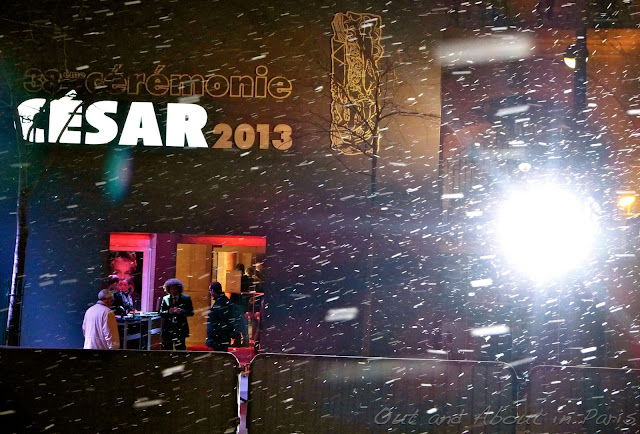 One of the biggest differences between the Academy Awards and the César Awards is that there's little chance that it will snow in Los Angeles on Sunday like it did in Paris last night!

Another major difference is that directors, stars and producers are cheered by adoring fans as they walk down the red carpet in their flowing gowns and tuxedos in Los Angeles. That wasn't the case in Paris, where throngs of cameramen, makeup artists and other members of SPIAC, the Union of Audiovisual and Cinema Professionals, chanted, "Extension, Convention!" and threatened to strike if their demands to receive a living wage aren't met. Amidst the cacophony of whistles, horns and shouts of "Avec nous" at the stars on the red carpet, the union members commented about the metal barriers that restricted them from having access to the people with whom they work on a daily basis. "For once," they demanded, "turn the cameras on us and listen to our demands! We only want to earn enough money to feed our families. You? You're going to have dinner at Fouquet's and the George V after the ceremony!" 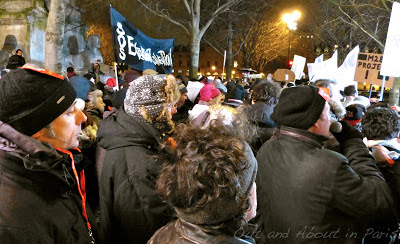 Members of SPIAC on the left; stars on the right.

Before working as an extra on Three Days to Kill, I'm ashamed to admit that I would have bemusedly thought, "Ahh, the French, they're never happy, not even with their 35 hour work week." But not last night. My experiences on the set taught me that film industry professionals receive small compensation in return for long, hard days that frequently stretch into the wee hours of the morning. So, in between taking photos of the stars as they arrived, I raised my hand and chanted, "Extension, Convention!".

As only 14% of the French films made a profit this year, it's widely recognized that the industry desperately needs an overhaul. Nonetheless, French producer Vincent Maraval's editorial in Le Monde, "French Actors Are Paid Too Much!", caused quite a stir for asserting that the industry's financial woes are due to the public financing that it receives and the exorbitant salaries of a select group of French film stars, who frequently receive more money for a box office failure in France than for a box office success in America. 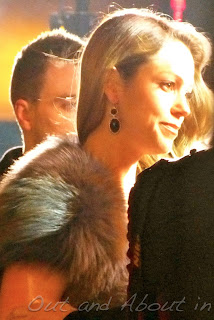 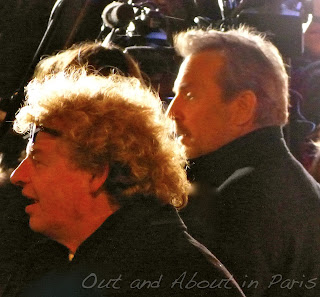 American film star Kevin Costner and his wife's arrival at the César Awards.

When American actor Kevin Costner, the recipient of a Life Time Achievement Award, arrived at the César Awards, the protesters adroitly switched to English. "With us, Kevin. With us!", they pleaded. In a hurry to escape the blinding snow flurries, I'm fairly sure that he didn't even hear them as he rushed towards the spotlights and photographers. He did, however, mention in his acceptance speech that making a movie is a cooperative effort and gave thanks to all the people who are a part of the process. Did any of the cameramen, makeup artists or electricians outside the Théâtre du Châtelet hear him? I don't think so because they were probably still standing in the bitter cold rather than snuggled up on a couch like I was watching the ceremony.

Academy Awards: watched by 39.3 million viewers; 2 million tweets with the hashtag #Oscar2012; recurrent theme in the 2013 nominated films is slavery; biggest budget in the best film category was 90 million euros for The Life of Pi; the nominee with the biggest box office sales is Les Misérables; the most nominated film is Lincoln.

César Awards: watched by 3.9 million viewers; 78,000 tweets with the hashtag #Cesar2012; recurrent theme in the 2013 nominated films is euthanasia; biggest budget in the best film category was 15.5 million euros for Rust and Bone; The nominee with the biggest box office sales is What's in a Name; the most nominated film is Camille Rewinds.

While I don't want to gloat, I'm pleased to have accurately predicted that Amour would win Best Film. Now I'm ready to make my predictions for the Academy Awards! 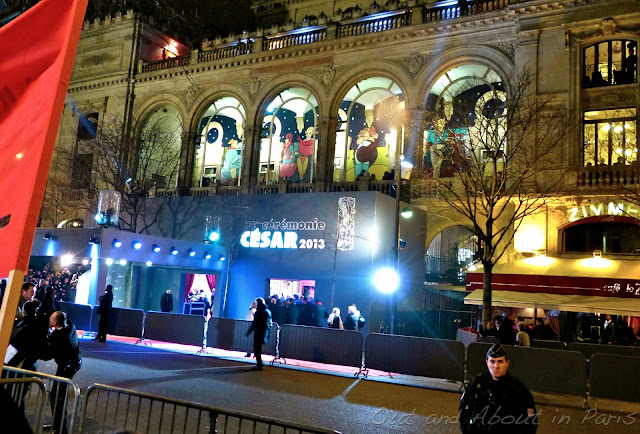