Introducing Marie, Maurice and Anne-Geneviève, some of the new bells at Notre-Dame Cathedral 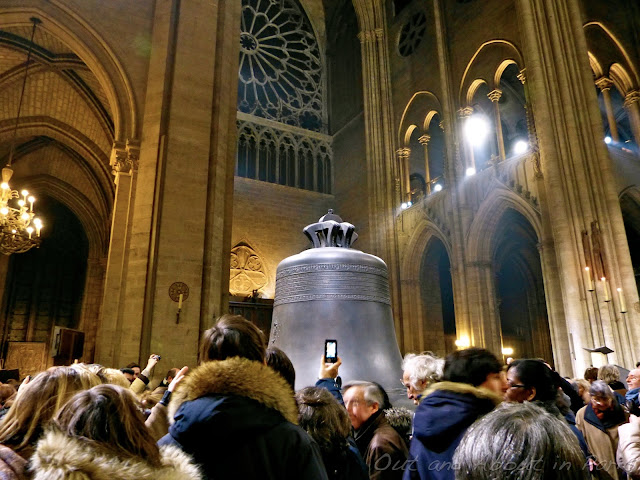 Mesdames and messieurs, you must leave. Please, ladies and gentlemen, the cathedral is closed. You can come back tomorrow. Notre Dame opens at 7:30 in the morning.

Turning my head for one last lingering glance at the eight new bells and bourdon (grand bell) lined up in a row in the nave of Notre-Dame, I walked out into the snowy Parisian night listening to the babble of excited comments around me. "They're beautiful!", sighed a young German girl. "Did you notice the fiery design on Anne-Geneviève and the crown on Maurice?", demanded a middle-aged French man of his wife. But it was the elderly English woman who summed it up best, "I wish that we would have had more time with them."

As part of the 850th anniversary of Notre-Dame, the cathedral will replace the four nineteenth century bells currently in the North Tower. The mediocre bells with discordant tonality were installed after the original bells, with the exception of the Great Bourdon bell Emmanuel in the South Tower, were melted down during the French Revolution.

Today is the very last day to see the bells before they move to the towers, where they'll signal the start of mass and the time for generations to come. Let me introduce you to some of them.


(Please click on any of the photos to enlarge them.) 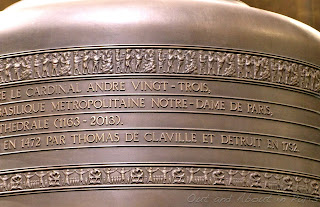 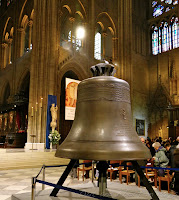 Marie weighs a whopping 6,023 kilograms (13, 278 pounds) and memorializes the first grand bell of the Cathedral that was cast in 1378. She's the only bell that will join Emmanuel in the South Tower. Over 330 years old, Emmanuel is only rung on special occasions to preserve him for posterity.

Two friezes representing the Epiphany and the Marriage at Cana encircle Maria, the new great bell. 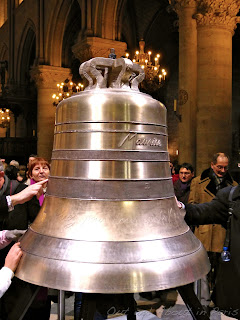 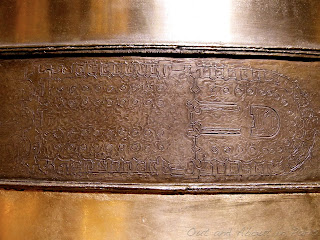 Even though Maurice is one of the smaller bells (1,011 kg), he bears the honor of being named after Maurice de Sully, the Bishop of Paris, who launched the construction of the current cathedral in 1163. Maurice's eight bands symbolize the number of days that it took God to create earth plus one band for the resurrection. The bell also bears the original architectural plans of the interior of the cathedral. 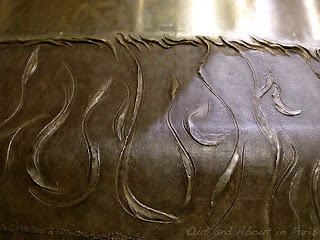 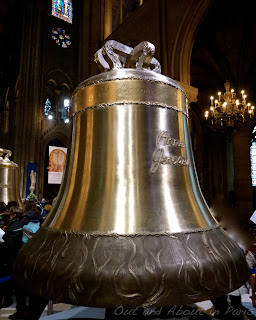 If you would like to see photos of the other bells, please click here to view the album posted on "Out and About's" Facebook page.
Labels: Anne-Geneviève bells Bells of Notre Dame cathedral Marie Maurice Notre-Dame