Afternoon tea at the world's only 7-star hotel, the Burj Al Arab in Dubai


As soon as you start planning a trip to Dubai, you'll notice that two names consistently appear in all of your internet searches for "top things to do". To help distinguish between Burj Al Arab, the world's only 7-star hotel, and Burj Khalifa, the world's tallest building, it helpful to know that "burj" means "tower". One of the towers is situated on a manmade island and was designed to resemble the billowing sail of a dhow, while the other is a breathtakingly high, Y-shaped structure.

If you're not staying at the Burj Al Arab, the only way to get past the security gate is to have a confirmed reservation at one of the hotel's nine restaurants or bars. After searching for the best way to get my foot in the door, I opted for afternoon tea at the Sky View Bar to watch the sun set over the Gulf.

Be sure to take your printed reservation with you because it's the equivalent of saying "Open Sesame" to the guard at the front gate. Like magic, the taxi driver crossed the bridge to the artificial island dotted with palm trees and deposited me at the front door, while forlorn tourists without a reservation craned their necks to get a sneak peak of the hotel through the high fence. Since I had deliberately arrived 45 minutes early to allow enough time to take photos, I wandered back across the causeway to marvel at the magnificent structure from a distance. 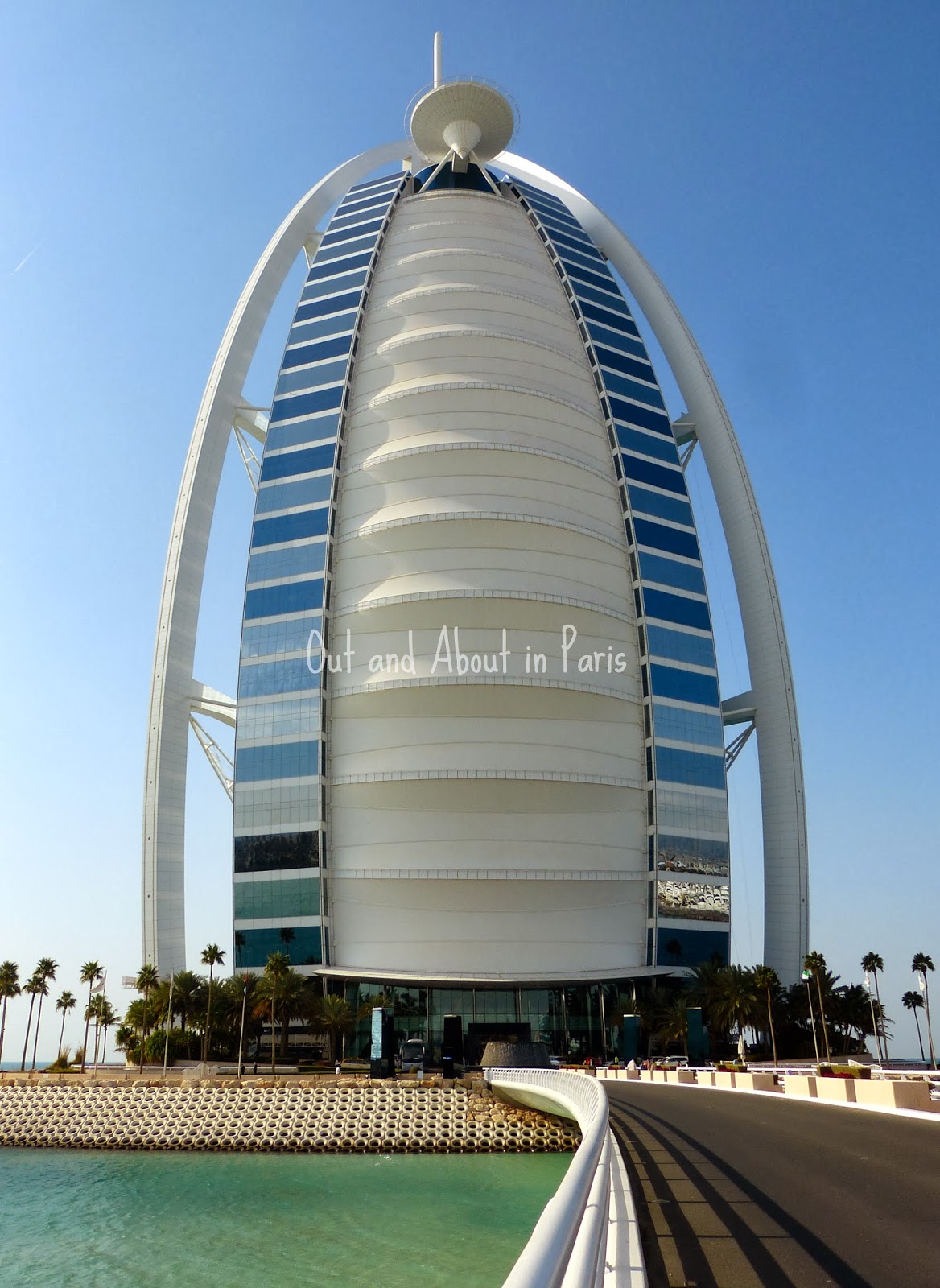 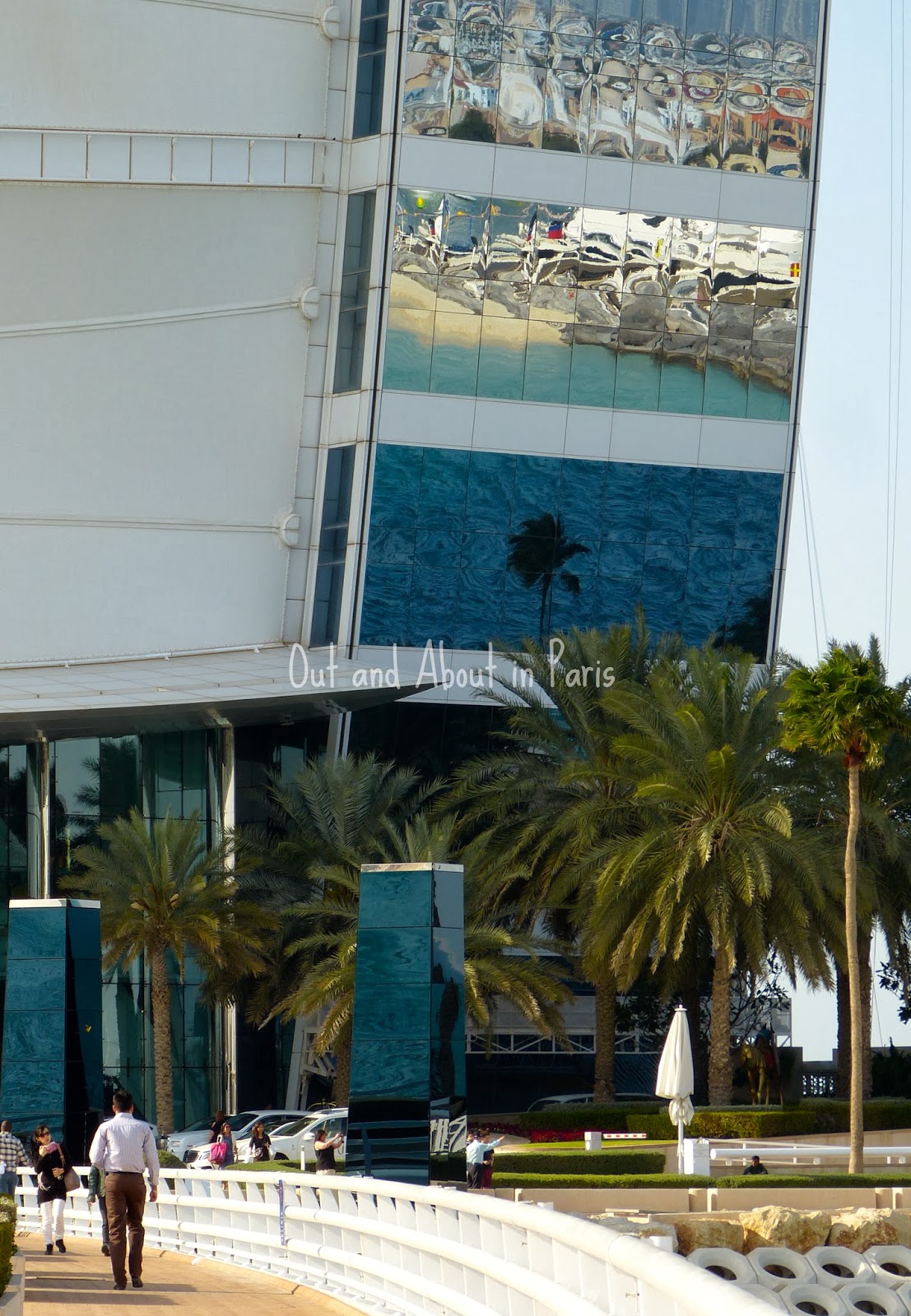 Returning to the entrance, I accepted the doorman's offer to take my photo next to one of Rolls Royces belonging to the hotel's fleet of chauffeur-driven vehicles and momentarily imagined that I was staying at the Burj Al Arab. It never hurts to dream, especially when you're on vacation! 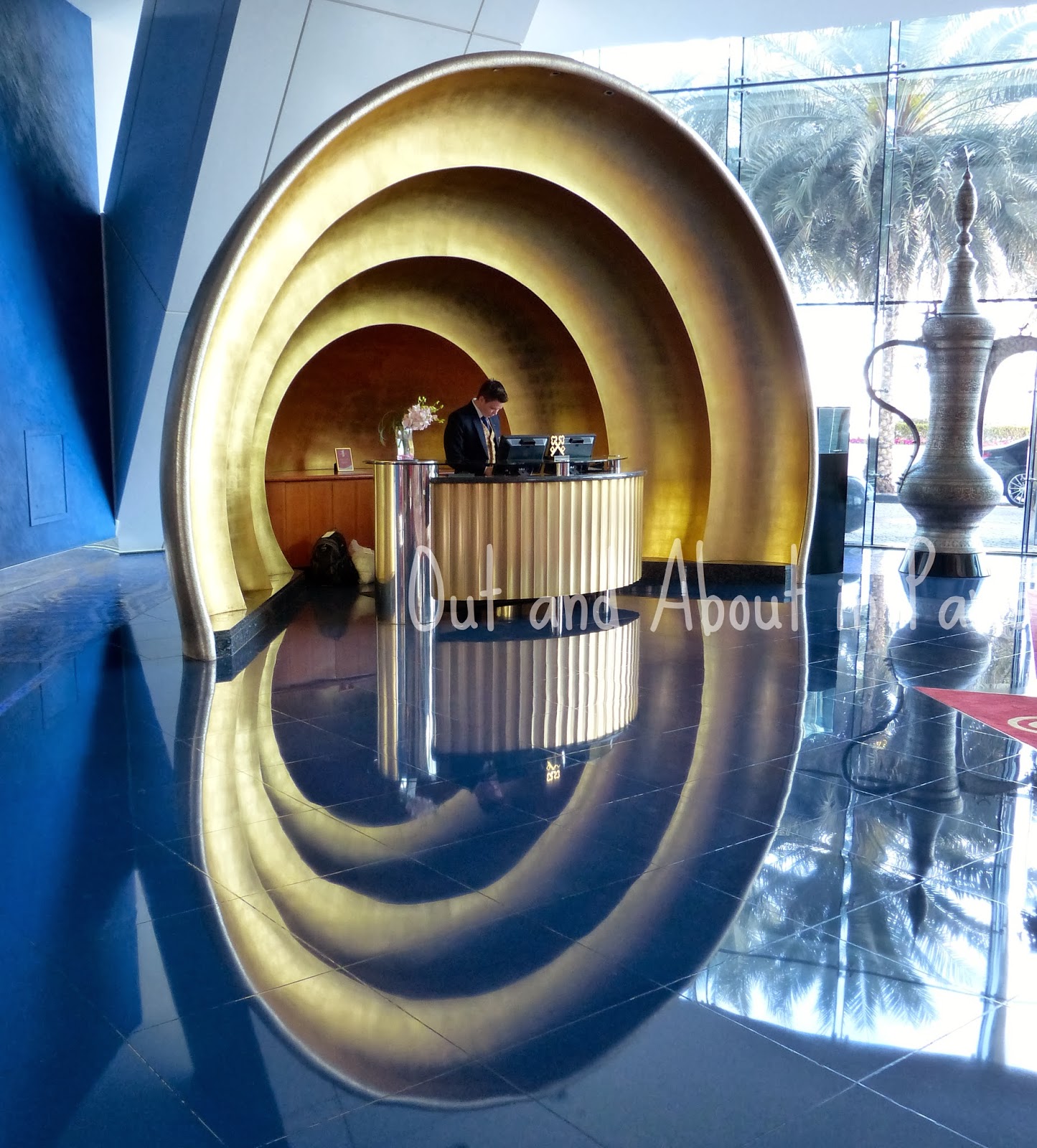 More accustomed to the understated luxury of European hotels, I found the lobby and one of the world's tallest atrium (180 m/600 ft) to be a bit over the top. But that didn't stop me from gawking like a country bumpkin at the aquariums full of tropical fish, enormous gold pillars and dancing fountains. As I quickly came to realize, Dubai doesn't do discrete! 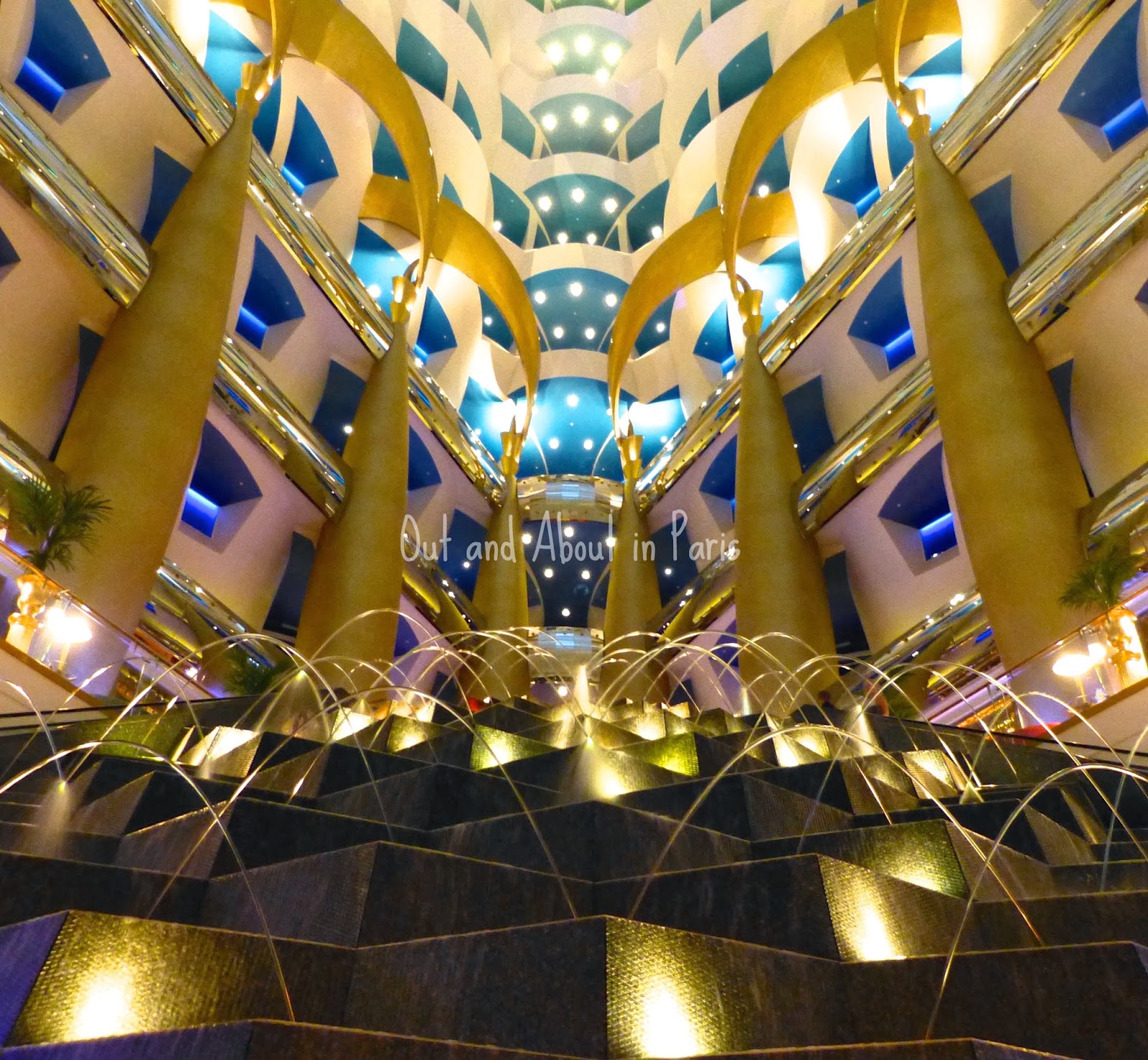 When I arrived at the elevator for the Sky View Bar before the scheduled time, I was thankful that the receptionist recommended that I go immediately to the top. Since they seat guests in order, with the tables next to the windows going to those who arrive first, I was happy that I followed her advice. If you're on your own, like I was, you may have to repeat your request for a window table once you're at the bar because I noticed that all of the other single women (and there were quite a few) were given magazines and seated discretely at the back. Since I have no problem being assertive when an amazing view of Dubai is at stake, I scored one of the prime tables. 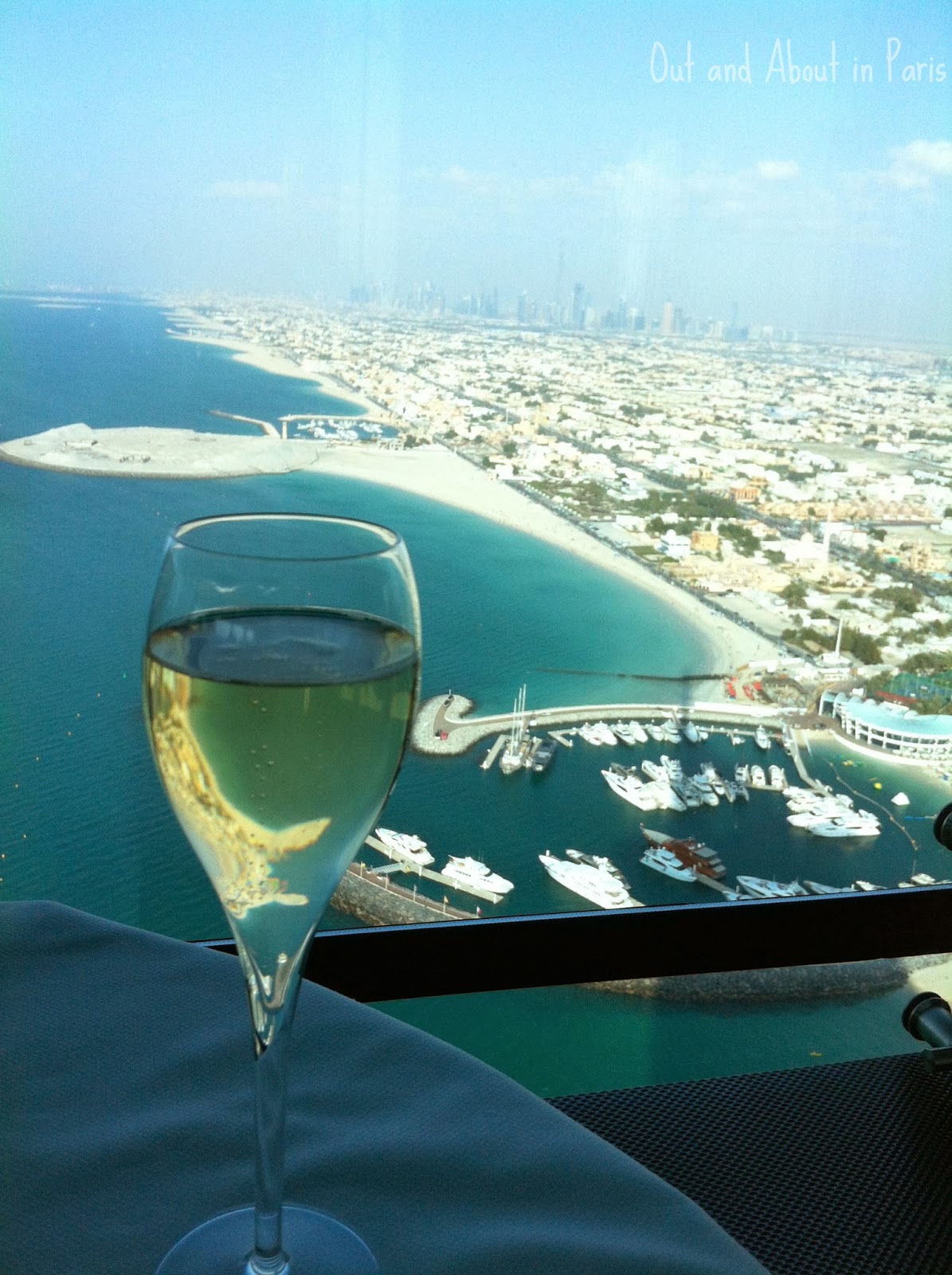 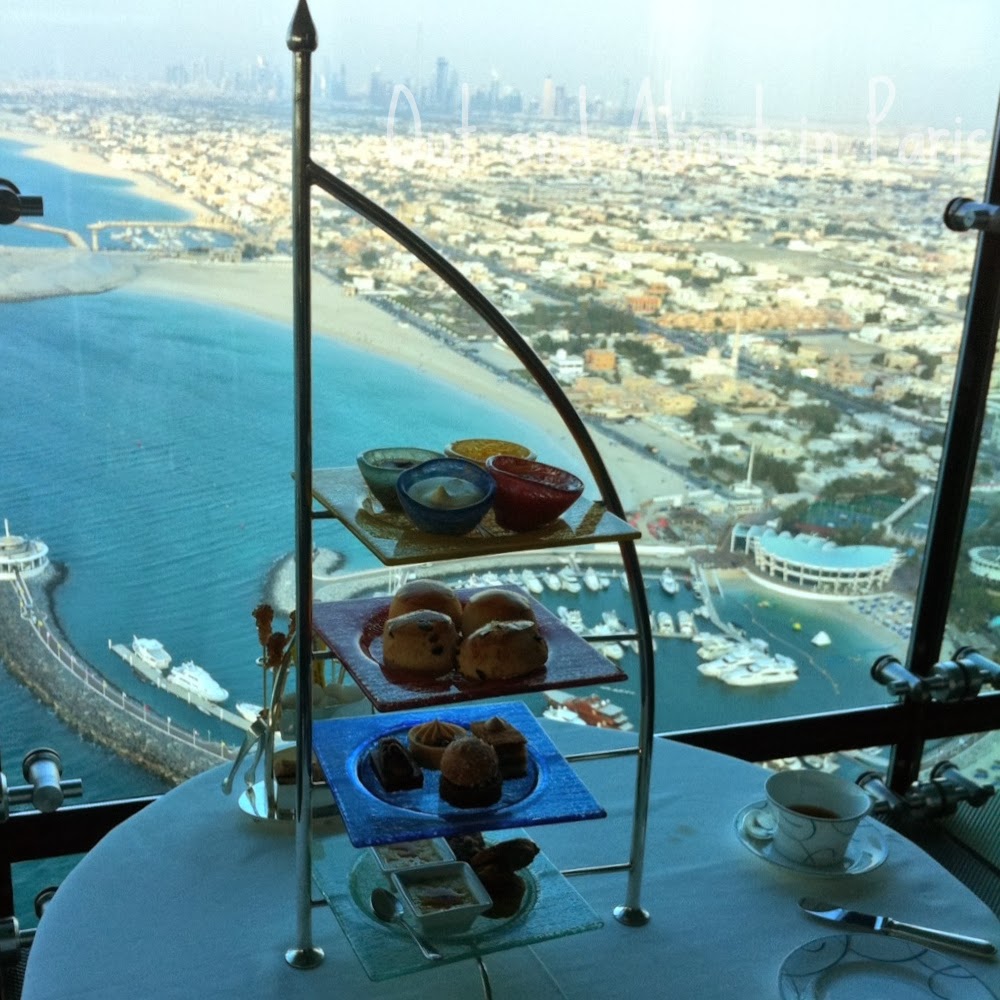 I love that the tea tray mimics the billowing sail shape of the hotel.

After the waiter graciously presented me with a damp washcloth to wipe my hands, he explained the 5-course menu and said that the tea package included as much as I wanted of everything, except the Louis Roederer Brut. With such an incredible view, the berry tart, roast beef with mashed potatoes, finger sandwiches, homemade scones with clotted cream and an array of desserts took a secondary role, which is a good thing because the food was only slightly above average. I did, however, appreciate that we could sample as many different teas and coffees as we wanted and that we were presented with a small box of chocolates to take home.

Given the "wow" factor of spending a couple of hours in one of the world's most renowned hotels, afternoon tea at the Sky View Bar was a must-do experience while I was in Dubai. Priced at AED 465 ($127) per person, it was also a once-in-a-lifetime adventure. To avoid disappointment, advance reservations are highly recommended because you won't be able to get past the security gate without them.

Related post: Wish you were here! Six days in Dubai.