The highly anticipated Champagne Social - a glittering celebration of the inspired and inspiring! 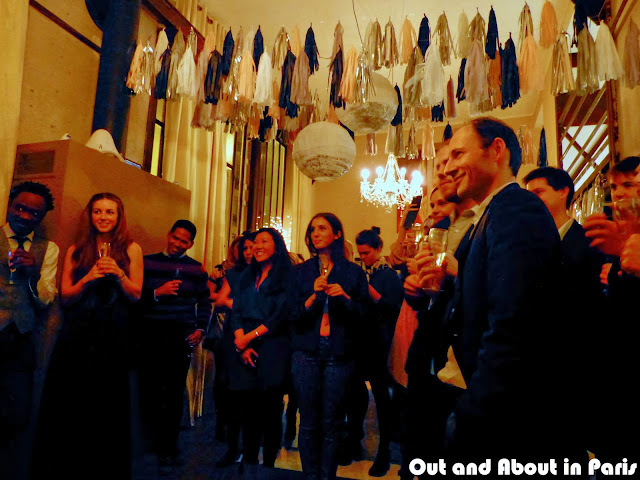 Paris, like any large city, can make a person feel small because it's not easy to make friends in a sprawling metropolis. That's why, on this day after Thanksgiving, I would like to give thanks for my very first blogger buddy in Paris, Lisa Czarina. On her blog, Ella Coquine, Lisa unflinchingly shares her adventures in the City of Light. Whether it's dealing with overly flirtatious French guys, expired visas or financial woes, Lisa brazenly approaches every situation with a good dose of humor and lots of sparkle.

When Lisa announced that she was joining forces with another native New Yorker, Cara Alwill Leyba of The Champagne Diet, to host The Champagne Social, the news set the world of social media atwitter. Literally. There were excited tweets about glitter, tulle and silver stars. There was even one about Liberace. The phone lines buzzed with bloggers calling each other to get wardrobe advice. What does one wear to an event described as a prom, an early New Year's Eve party and an afterparty to a fulfilling year? 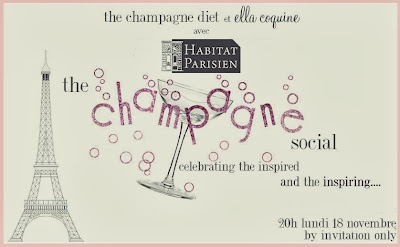 When Lisa emailed a sneak peak of the swanky Popincourt Loft where Habitat Parisien had generously offered to host the fête, the anticipation was palpable on Twitter. The weekend prior to the event, Lisa and Lauren Lou Bate of Folies du Bonheur  donned face masks (the paper not the beauty kind) and white hazard suits to make the glittery decorations for the party. There were tweets with photos of pink rubber gloves, wire cutters, wire and two starving crafters taking a much-needed Shirashi break.

After weeks of waiting, the 18th of November finally arrived. I put on my high heels and tottered over to the Popincourt Loft, which is even more impressive in reality than it is in the online photos. Silver, pink, black and white tassels dangled from the ceiling and copies of Cara's book Sparkle: The Girl's Guide to Living a Deliciously Dazzling, Wildly Effervescent, Kick-Ass Life adorned the baby grand piano. The sound of champagne being uncorked welcomed guests as they joined the throng. The first ever Champagne Social was an effervescent, bubbly success. Congratulations to Lisa, Cara, Lauren and Habitat Parisien for throwing a dazzling fête and thank you for including me!

Since only a few of my photos turned out (I guess I was having way too much fun to focus!), I invite you to read more about The Champagne Social on the following blogs: