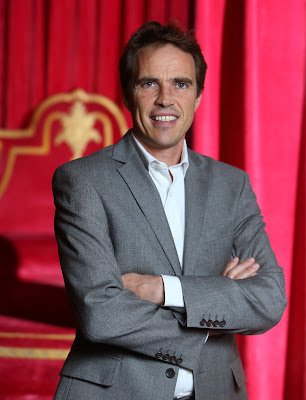 "Ah, it feels good to be home." That's what Stéphane invariably says whenever we pass through the arched gate into the enchanting gardens of Château de Vaux le Vicomte. There's something so welcoming about the 1,236 acre (500 hectares) estate that it's easy to imagine that we've returned to our own private domain.

But in reality, Stéphane's and my favorite French castle belongs to the Vogüé family. On Saturday, I was pleased to have the opportunity to talk with Alexandre de Vogüé, who became co-manager of the estate responsible for development and communications when his father retired in 2012.

When we take our visitors to Château de Vaux le Vicomte, I always describe it as the castle that inspired Versailles. How would you describe it?
While it's true that King Louis XIV hired André Le Nôtre, Louis Le Vau and Charles Le Brun, the same landscaper, architect and painter who helped Nicolas Fouquet create Vaux le Vicomte, I would describe it as the castle that inspired all of Europe for more than a century. What the landscaper André Le Nôtre did at Vaux le Vicomte was incredibly innovative for the 17th century. He consolidated the technical innovations from previous decades, like laws of perspective, water conveyance systems and leveling, to build the foundations of the French formal garden, variations of which then spread throughout Europe.

The story of Nicolas Fouquet and Château de Vaux le Vicomte is largely unknown to most Anglophones. Can you tell us briefly about the fascinating history of the castle?
Nicolas Fouquet was a brilliant, flamboyant and charming man. He was also the Superintendent of Finances for Louis XIV. At the time, there was something called the "duty to be rich". In the 17th century, the finances in France were a mess and the state was close to bankruptcy. To demonstrate his solubility, Fouquet assembled a team of the three best artists of the time, Le Nôtre, Le Vau and Le Brun. And then he did something very important, he gave them a huge amount of virgin land, a lot of money and the freedom to design something audacious and innovative.

Audacious?
Yes, audacious. Because you have to remember that they were creating a totally new model. One where there was harmony between the architecture and the landscape.

Unfortunately, both Jean-Baptiste Colbert and Fouquet were vying for the position of Prime Minister. Colbert, who was extremely jealous of Fouquet, convinced the King that Fouquet was embezzling money.

While it's difficult for historians to believe that Fouquet had a good relationship with Louis XIV, he was loyal to the King. But the main problem is that he didn't understand the king's personality. Fouquet made the mistake of thinking that Louis XIV was a kind of party animal or a "light character". He was wrong. The King, who had been planning Fouquet's arrest, waited until after a lavish soirée at Vaux le Vicomte. Do you know what the French writer Voltaire said about Fouquet? “On 17 August [1661] at 6 in the evening, Fouquet was King of France; at 2 in the morning, he was nobody.”

Three weeks later, Fouquet was arrested and spent the rest of his life in prison.

If you could ask Nicolas Fouquet one question, what would it be?
I would ask how this [gesturing at the castle and garden] came out of the earth. How did he conceive of something like Vaux le Vicomte when he was only familiar with Louis XIII style castles? He was like the chef d'orchestre who conducted the imagination of three geniuses to create something totally new.

I would also ask him what secrets he knew about the King. He must have known something that made Louis XIV overrule the judge's decision to banish Fouquet from the kingdom and to incarcerate him instead. The story would make a very good movie. There is a French mini-series [Le roi, l'écureuil et la couleuvre] starring Lorànt Deutsch but nothing in English yet.

As an American, I can't even begin to imagine what it must have been like growing up in a castle. So, I've got to ask, did you ever do anything mischievous, like play in the King's bedroom?
[Laughing and at first declining to answer in case his parents happen to read this post] When we were kids, my two brothers and I occasionally searched for an adrenaline rush, something a bit scary that we weren't permitted to do, like running through the tour circuit of the château, jumping on the king's bed, hiding in the fireplaces and finally ending up in the attic, surrounded by old chairs, paintings and pieces of furniture covered with dust and spider webs. We didn't need to watch cartoons or listen to stories because we had our own world of excitement, games and adventure set in one of the most exquisite and unique baroque decors of the 17th century!

If visitors to Paris only have the time and money to tour one castle, why should it be Vaux le Vicomte?
Because it will be a pleasure from A-Z. It's more than just visiting a castle, we consider you as our guest. The personnel work hard to make sure everyone feels at home. Not only do we offer the grandness of a huge château but Vaux le Vicomte also has a lot of charm. It has a more human scale than Versailles.

What do you wish more people would do while at Vaux le Vicomte?
I wish that guests would spend more time in the garden. 70% of our visitors are French and the majority of them don't venture past the rond d'eau. They step outside, look around and say, "Yes, it's a French formal garden" before they turn around and leave. Because of the perfect proportions between the house and gardens, there's a certain serenity or peacefulness here. It's a place where people can take refuge from the city. They can picnic in the designated areas and relax. There are also two walking circuits, one that loops around the statue of Hercules at the far end of the gardens and a discovery trail that leads visitors to the largest trees on the estate.

You're the 5th generation of the family to manage the estate. What is your mission?
First of all, we have to preserve Vaux le Vicomte because of its emblematic architecture and gardens. We also want to share it with the maximum number of people and to transmit it to future generations in the best state possible. My goal is to make Vaux le Vicomte what it once was, a center for the arts. We have lots of projects in mind, like exhibitions and cooking classes, but we also have lots of expenditures for maintenance.

What's the best way for foreign visitors to get to Vaux le Vicomte from Paris?
The easiest way is to book a coach tour with Paris Cityrama. They offer days trips to Vaux le Vicomte and Fontainebleau, as well as an evening excursion to our candlelight evenings. Of course, it's also possible to take the train from Paris. On weekends, the "châteaubus" takes visitors from the train station in Melun to the castle.

Please click here to see a photo album with some of my favorite photos of Château de Vaux le Vicomte.

In a recent article, Grand chateaux worth a day trip from Paris, Rick Steves says Vaux le Vicomte "gets my vote for the most beautiful chateau in all of France". 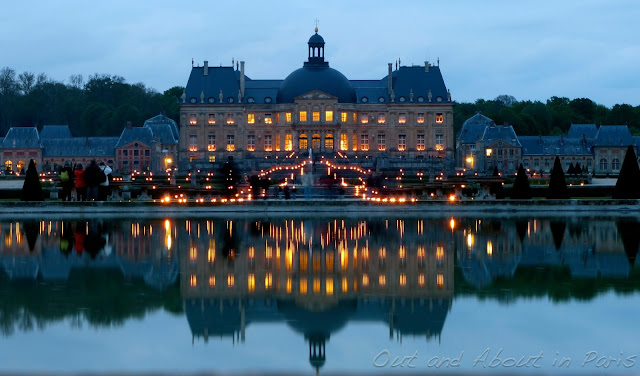