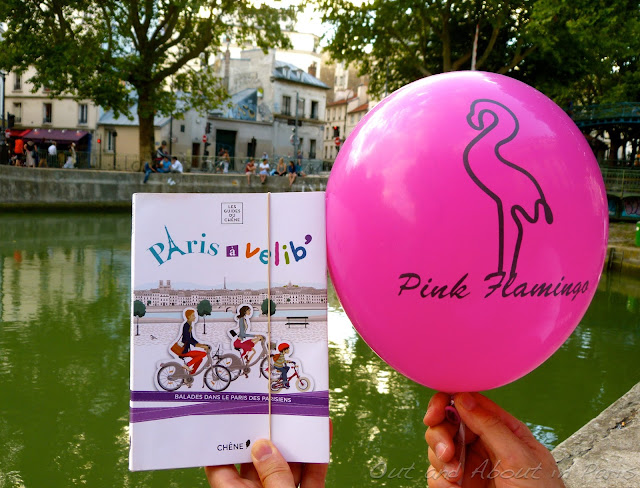 If you happened to notice a ravenous looking man with a bright pink balloon sitting next to the Canal Saint-Martin yesterday, there's a good chance that it was Stéphane. But it may have also been someone else because holding a "Pink Flamingo" balloon aloft in the breeze is a cue that you're waiting for your Ghandi, Ho Chi Minh or Obama pizza to be delivered to one of the hippest open air dining spots in Paris, the Canal Saint-Martin.

After having read about Pink Flamingo's unique delivery system in Paris à Velib' (Paris by Bike with Velib') back in June, I was ready with an answer when Stéphane asked if I had a plan for our Sunday afternoon outing. Glancing at my watch, I proposed that we follow Itinerary 5, "The Paris Canals", from the Bassin de la Villette to the Canal Saint-Martin. If we maintained a good speed, I calculated that we would reach the Pink Flamingo precisely when the doors opened for dinner at 7:00 pm.

Given the glorious weather, I should have known that lots of other people would also want to be outside and that there wouldn't be any bikes at the Velib' stations near Bassin de la Villette. But with pizza on our mind, we did what we had to do. We walked. We had a strong incentive to reach the 10th arrondissement before a long line formed in front of Pink Flamingo. Along the way, I snapped some photos of Parisians playing boules and families enjoying the last days of Paris Plages. It was one of those perfect Sunday afternoons that linger in your memory long after your alarm rings on Monday morning.

When we finally arrived at Pink Flamingo, we were thankful to have a family in front of us so that we had time to study all of the creative options on the menu. Wavering indecisively between the Basquiat topped with gorgonzola, figs and jambon cru and the Che covered with Cuban style pork and fried plantains, I appealed to the man behind the counter for assistance.

Fifteen minutes later, our pizza arrived at the Canal Saint-Martin right on time. As I described the tantalizing tastes of pork marinated in lime, garlic, coriander and green onions to Stéphane, I heard a passerby say, "I wonder where they got takeout pizza." If my mouth wouldn't have been so full, I would have told her, "Pink Flamingo - and they deliver, too!"

One of my favorite bloggers, Ella Coquine wrote about the Pink Flamingo in the Marais way back in May 2011. Eating at an exclusive table in a Volkswagon bus sounds every bit as fun as picnicking next to the Canal Saint-Martin.