After 500 Years, Tour Saint-Jacques Temporarily Opens to the Public 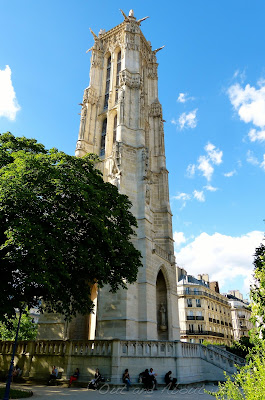 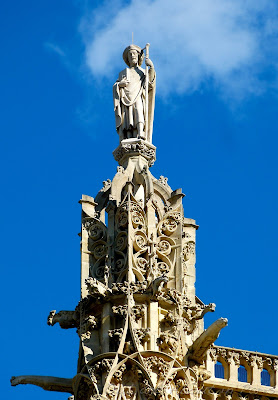 While Stéphane and I were sipping glasses of Perrier menthe and rosé on the terrace of Café Nemours on Friday evening, my ears perked up when I overheard an American couple at the table behind us talking about the 360-degree panoramic view of Paris from "that tower". When the woman added that the vista of all the famous Parisian monuments was well worth the climb even though it had been hard on her knees, I nudged Stéphane in the ribs and whispered, "They're talking about the Tour Saint-Jacques, the one I want to visit this weekend. We're going to have to get up really early on Sunday morning to make reservations."

After being closed to the public for most of its 500 year history, the Tour Saint-Jacques received permission to temporarily open its doors to visitors from July 5 until September 15, 2013.

Built in the flamboyant Gothic style between 1509 and 1523, the Tour Saint-Jacques is all that remains of the Eglise Saint-Jacques-de-la-Boucherie (Saint James of the Butchers) after it was ransacked by French revolutionaries in the late 18th century. One of the traditional starting points for pilgrimages to Santiago de Compostela in northern Spain, the 62 meter (203 foot) tower was also an ammunition plant. In the early nineteenth century, molten lead was passed through a sieve and dropped from the top of tower. By the time it landed in a tub of water at the bottom, the lead was in the shape of a bullet. At other times in its history, the tower was used as a small meteorological station and a watchtower to spot the frequent fires in the French capital.

For fans of the Harry Potter series, it's interesting to note that alchemist Nicolas Flamel was buried in the nave of the Eglise Saint-Jacques-de-la-Boucherie.

From 2000-2009, the Tour Saint-Jacques was covered by scaffolding as decades of pollution was scrubbed from the 3.5 meter statue of St. James the Apostle, gargoyles, 18 statues of saints and sculpted symbols of the four evangelists that adorn its corners. Upon completion of the 8.3 million euro restoration, the Tour Saint-Jacques was opened to the public for the first time in 2012 during France's annual Heritage Weekend.

So, after a late night at Château Vaux le Vicomte's magical Candlelight Evening, did Stéphane and I have the gumption to climb the step spiral staircase of the Tour Saint-Jacques early this morning? Nope. But I sure hope that I'll be able to get to see the magnificent view before the tower closes its doors again on September 15. If you get there before me, please let me know because I'll be away from Paris on vacation from August 15-29.

Additional information from the ParisInfo website: Special opening of the tower from 5 July to 15 September 2013. Accompanied tour, every hour from 10am to 5pm on Fridays, Saturdays and Sundays.
Duration of tour: 50 minutes. Reservations must be made on site (corner of rue de Rivoli and rue Sébastopol), at the foot of the Tour Saint-Jacques, on the tour days from 9.30am for the same day. Each person can reserve three places.
Access to the top (54 metres, approximately 16 floors) via a small staircase with 300 steps. It is not recommended for those suffering from claustrophobia or vertigo and access is not permitted to those under 10yrs. 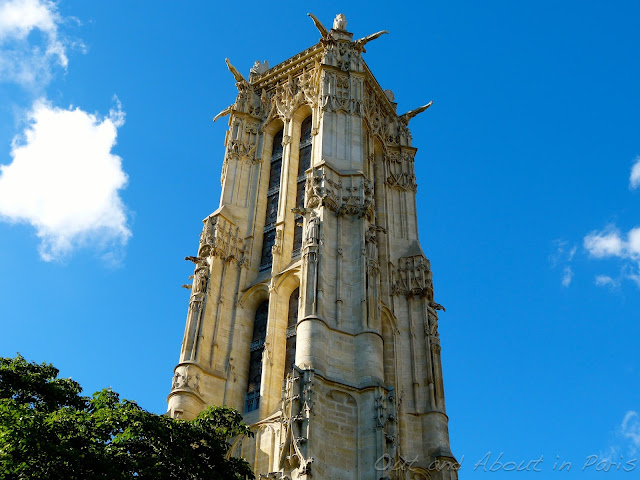