Imagine a construction project lasting for more than 500 years! Thanks to the fluctuating prosperity of the local silver mines in Kutná Hora and the Hussite wars, work on the Cathedral of St. Barbara was an on-again, off-again proposition.

The structure was started in 1388 after the owners of the Kutná Hora silver mine won a centuries' long battle to establish a cathedral outside the authority of the nearby Sedlec monastery. Intended to rival the Prague Cathedral of St. Vitus in its magnificence, construction of the cathedral was contingent upon the success of the silver mines. As Jan Parler, the cathedral's first architectural contractor, was the son of the master-builder of Prague's St. Vitus, the similarities between the two cathedrals is certainly not accidental. In fact, Jan must have wanted to better his father's creation because St. Barbara was originally planned to be twice the present length. 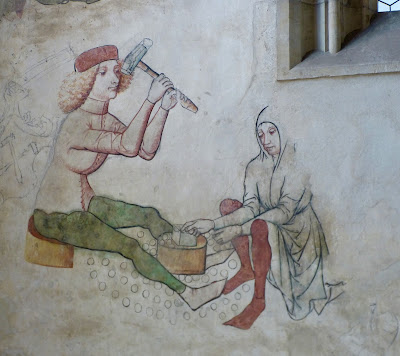 While its flying buttresses create an exquisite architectural profile, what impressed me most about the cathedral is that it paid tribute to the city's silver industry and to the miners who toiled underground for 10-14 hours a day. Not only is the namesake of the cathedral the patron saint of miners, but some of the 15th century frescoes feature minters hard at work minting Prague groschens. The 17th century statue of a miner reveals the accoutrements of the trade: an oil lamp to dispel the dark and a leather apron used to slide down to the mines. Located 500 meters (1,640 feet) underground, the Kutná Hora mines were the deepest in the world at the time. The statue provoked a lingering question. Why did the miners wear white? I hope that I'll learn the answer when I go to the Czech Museum of Silver during my next visit to Kutná Hora. The museum was, unfortunately, still closed for the winter when Stéphane and I were there at the end of March. 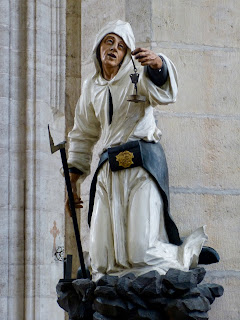 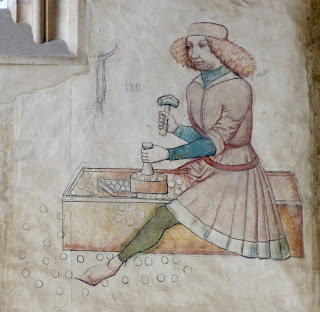 Insider's tips: As with the Sedlec Ossuary (The Bone Church), it's best to visit the Cathedral of St. Barbara after the buses filled with tourists from Prague have left for the afternoon. To fully appreciate the grandeur of the cathedral, be sure to walk all the way around it. The terrace on the east side of the cathedral offers a beautiful view of Kutná Hora.

Even though St. Barbara was built in the style of a cathedral, it's actually a church. Because it's most commonly referred to as the Cathedral of St. Barbara (Katedrál sv. panny Barbory), that's the designation I used in this post.