This would be a good time to admit that Stéphane and I knew next to nothing about the Czech Republic before moving here in January. Sure, we could tick off a few basic facts on our fingers - Czech beer is reputed to be the best in the world, the locals love hockey and Prague is one of the top tourist destinations in Europe. But that was about it. Our paltry knowledge about the Czech Republic partially explains why Stéphane had to apologize to one of his colleagues this week.

Before leaving for our Easter trip to Kutná Hora, Stéphane expressed some skepticism when a co-worker told him that the origins of the word "dollar" comes from the Czech "thaler", an abbreviation of "Joachimsthaler", a silver coin that was used throughout Europe for more than 400 years. Even though the thaler was minted in the town of Joachimsthal (now Jáchymov) and not Kutná Hora, his colleague thought this information would be of interest to Stéphane because the Royal Mint of Bohemia had been located in Kutná Hora. 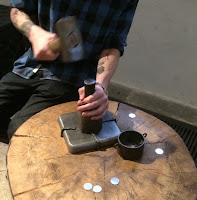 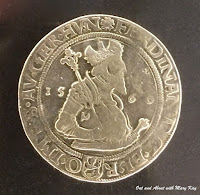 Coin minting demonstration and a silver thaler, which evolved into the word "dollar" in the New World.

The Italian Court was named for the Italian minters who came to Kutná Hora to teach the locals their trade. At the beginning of the 13th century, King Wenceslas II created a "silver rush" when he closed 17 mints scattered across his kingdom and established a central royal mint in Kutná Hora. With the production of a new coin called the Prague groschen (the precursor of the thaler), the king created a unified currency for the whole country. During the next 400 years, the Italian Court was the economic heart of the Kingdom of Bohemia. It housed the mint, central bank and Ministry of Finance.

To obtain the silver needed to produce the coins, the 13th century silver miners of Kutná Hora toiled in precariously dangerous conditions 500 meters (1,640 feet) underground. Because miners' lives were often cut short by accidents and illnesses, women married to miners would often go through several husbands within a short span of time. As opposed to miners, women believed that minters made ideal husbands because of their higher salaries, massively strong forearms and their inability to hear! The constant din created from striking coins meant that most minters were completely deaf. 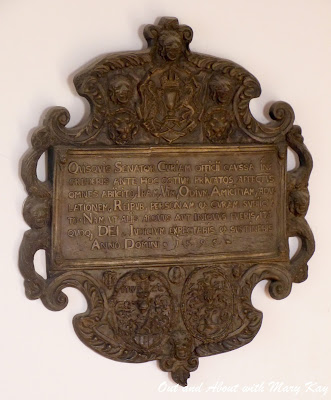 The Italian Court also served as the residence of the Bohemian kings when they were in residence in Kutná Hora. Most memorable to me during our tour of the former royal palace was a copy of the plaque that once hung outside the Royal Audience Hall. Copies of the plaque are also located at the UN in Geneva and New York. The original plaque is stored at the regional museum in Hrádek. Translated, the plaque reads:

Every member of the council, having to enter this door to accomplish your official duty, put off all your passions: Hate, Hostility, Force, Friendship, Hypocrisy; all your troubles submit to your community.  The same justice you would do to others, the same reward you have to attend and to bear by our Lord’s judgment. A. D. 1595.

Wouldn't the world be a better place if our government officials heeded these wise words written more than 420 years ago?

The Italian Court also has a small chapel that's ornately decorated in the Art Nouveau style of the early 1900s.

Insider's tips: As it's only possible to visit the Italian Court by taking a guided tour, it's a good idea to enquire about the timing of the tours as soon as you arrive in Kutná Hora or to reserve a tour three days in advance via email: vlasskydvur @ kh.cz.