Holding up a bunch of leafy greens with delicate yellow flowers, Chef Eric Briffard invites the members of our group to sample one of the serrated leaves. "Mizuna, also known as Japanese mustard, is an interesting addition to salads," he explains. As I savor the slightly peppery taste in my mouth, I notice that the Chef's eyes are busy surveying the other produce at the colorful market stall. Before placing anything in the woven baskets that we've brought with us from the Four Seasons Hotel George V, Briffard performs a quick taste test to confirm that it meets his exacting standards. From the way that he jokes with the vegetable merchant while he selects three heads of creamy-white cauliflower and enquires about the fishmonger's husband as he studies a piece of cod, it's clear that Chef Briffard has developed close relationships with many of the vendors.

More than the Louvre or Eiffel Tower, outdoor markets are a fundamental part of daily life in Paris. They're where locals go for the freshest fruits and vegetables, perfectly ripened cheese and convivial social interactions. Wanting to share this typically Parisian experience with guests of the George V, General Manager and Regional Vice President Christian Clerc has launched a new experience: market visits with the hotel's Michelin-rated chef from April until September.


After pausing at the front entrance of the George V for a souvenir photo, Chef Briffard warmly welcomes us into the hotel's event kitchen for a cooking demonstration. To make it official, we don the hotel's signature black aprons emblazoned with gold "V's" (très chic) and towering chef's hats. Fortified by glasses of wine and equipped with knives and cutting boards, our group eagerly sets to work chopping vegetables for cauliflower taboulé, a simple dish that Briffard frequently makes for his family. Normally, a hush falls over a group when they're focused on their work, but the Chef's easygoing manner creates a companionable atmosphere in the kitchen. Conversation flows as we marvel at the exquisite flavors of the first dish, salmon sashimi.


While we observe the Chef's carefully orchestrated movements as he prepares confit de salmon, cauliflower taboulé and an amazing seasonal dessert, he reveals his culinary philosophy: share the best that France has to offer with the hotel's guests from around the world. To emphasize his point, he offers each of us a strawberry. "They're from Provence, the first of the season," he declares. Never in my life have I tasted such a succulent strawberry. It's a sweet revelation. Yet, the strawberries combined with thinly sliced fennel, a scoop of goat cheese ice cream, slice of kumquat, dollop of black olive tapenade and drizzle of olive oil are even more sublime.

The monthly market visits with Chef Briffard  and floral arrangement classes with Jeff Leatham are available exclusively to guests of the Four Seasons Hotel George V or restaurant Le Cinq on a complimentary basis. Please refer to the "Experiences" section of the hotel's website or contact the Concierge for additional information. 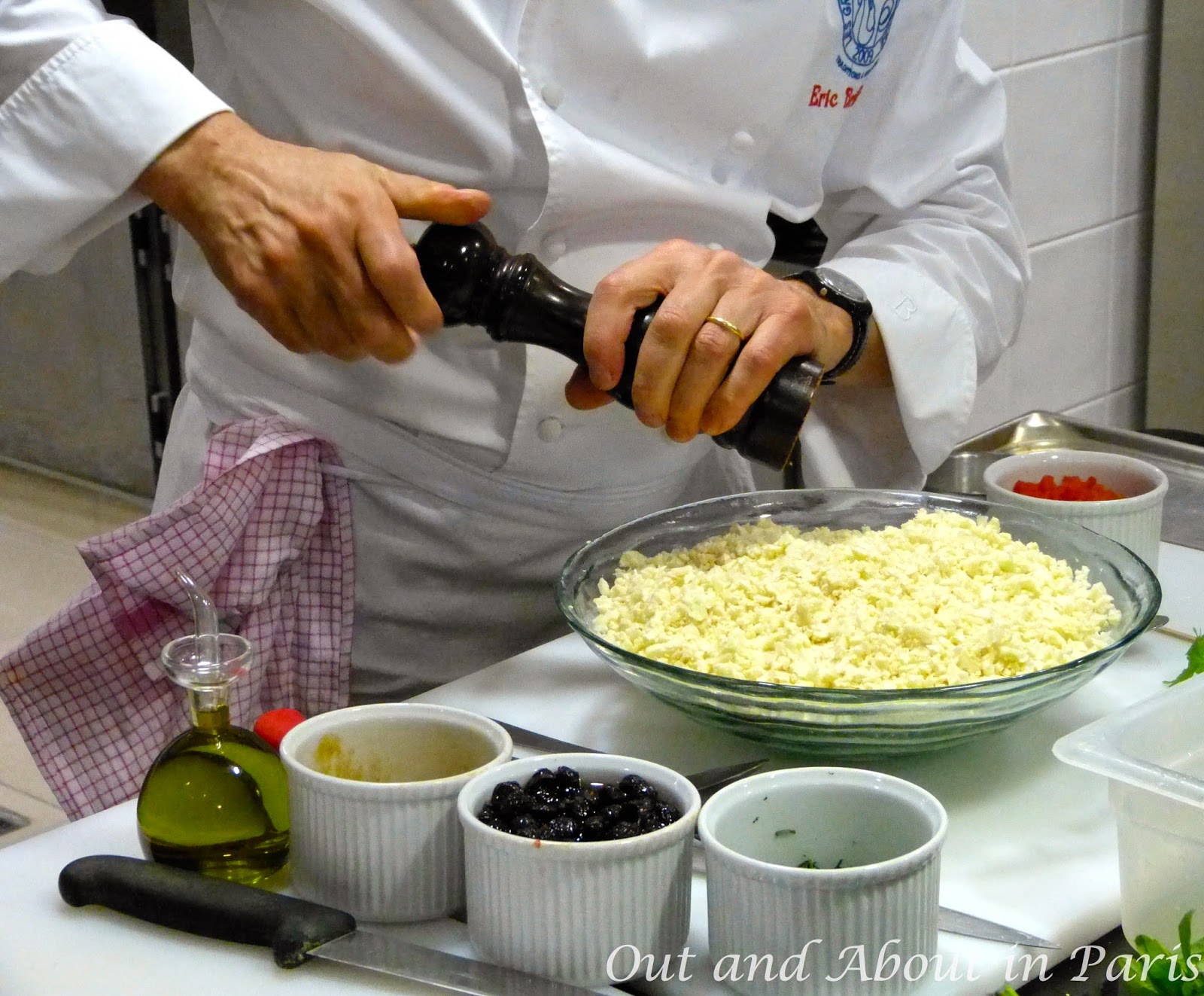 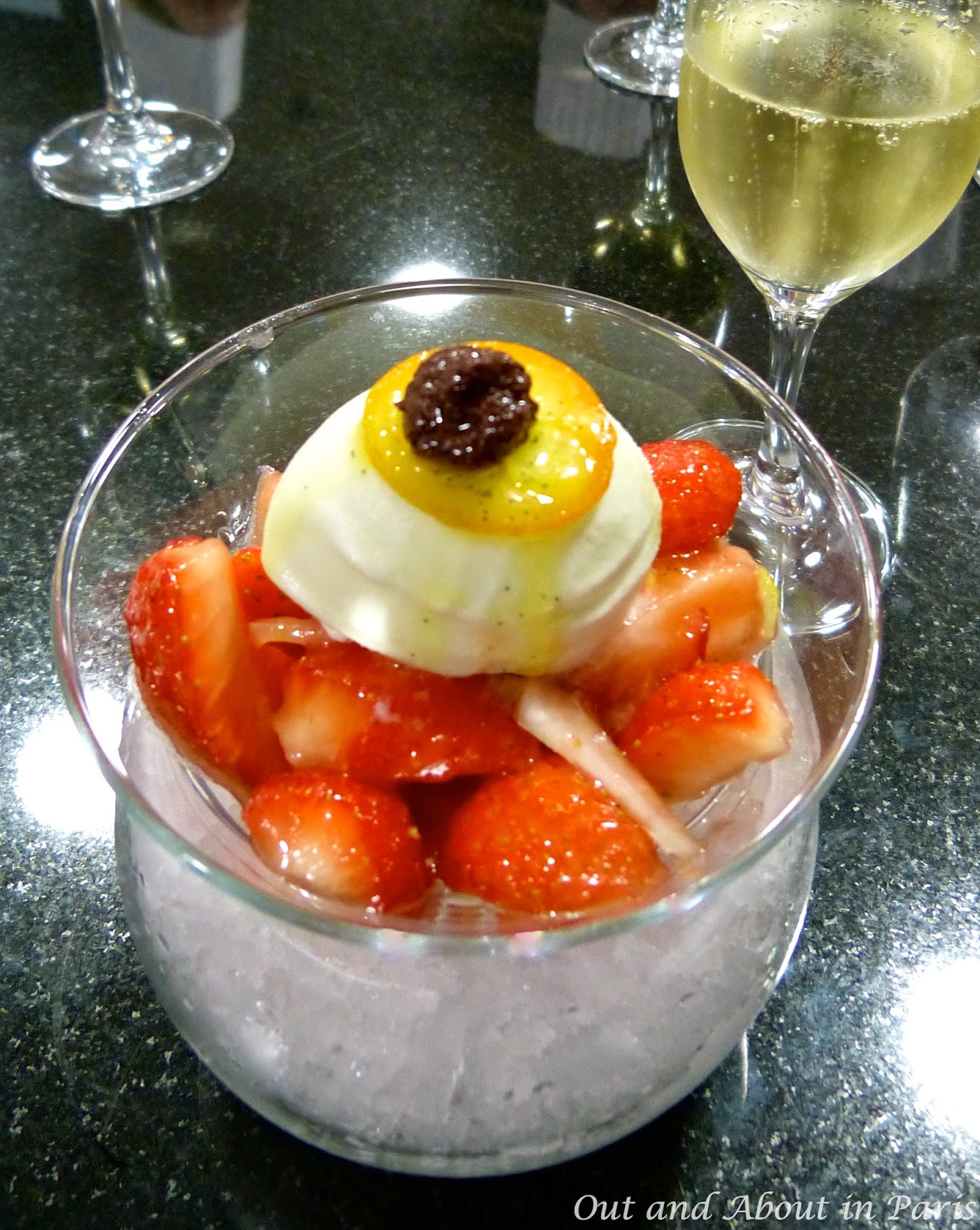