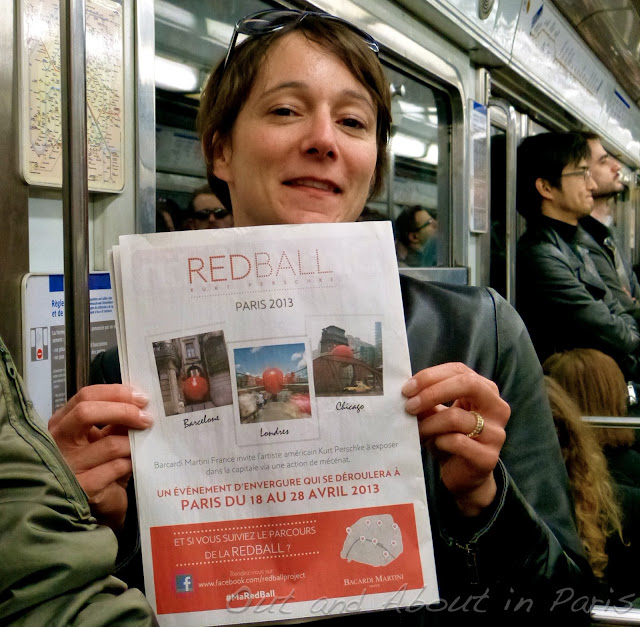 Riding the metro is a fairly mundane experience. People get on, others get off and every once in a while there's a musician singing "Besame Mucho" to break the monotony. April 18, however, was different. There was a palpable buzz of excitement as the group next to me huddled around a woman who was pointing at some photos in the newspaper. Repositioning myself to eavesdrop on their conversation, I overheard the words "red ball". No wonder they were so enthusiastic. The "RedBall Project" had just arrived in Paris and everyone was speculating about where the huge sphere would appear. Since I was on my way to its first performance in front of the Centre Georges Pompidou, I asked the woman's permission to take a photo documenting her enthusiasm about the event.

According to New York artist Kurt Perschke, the RedBall Project's magnetic, playful and charismatic nature has also generated high levels of excitement at previous performances in other cities around the world, including Abu Dhabi, Sydney, Barcelona and Chicago. But most importantly, it stirs the imagination and prompts people to talk about art. As Perschke says, "people approach me on the street with excited suggestions about where to put it in their city. In that moment the person is not a spectator but a participant in the act of imagination. That invitation to engage, to collectively imagine, is the true essence of the RedBall Project."

Given the company's mythique "ball and bar" logo, it's not surprising that Bacardi-Martini France invited the American artist to exhibit the inflatable ball in spots around the capital as part of its 150th anniversary celebration. During the past week, the 15 foot (4.5 meters), 250 pound red balloon has been spotted at the Passerelle Simone de Beauvoir, Canal St Martin and has even cruised past famous Parisian landmarks on a bateau mouche on the Seine. If you would like to get a glimpse of this public art project before it travels to its next destination, it will be at the Place du Commerce in the 15th arrondissement from 12:00 - 4:00 pm on Saturday, April 27, and the Luxembourg Gardens from 12:00 - 7:00 pm on Sunday, April 28.

After chatting briefly with Perschke during the cocktail party hosted by Bacardi-Martini, I was pleased to bump into him at Charles de Gaulle Airport yesterday morning and to learn that the RedBall Project's next stop is Lausanne, Switzerland. As a Swiss-by-marriage, my mind started racing as I began thinking of the empty public spaces where I would display the inflatable red ball. My first choice would be floating next to the huge silver fork that's stuck in the Lake of Geneva because both objects play with scale.

The artist hopes that future destinations will include Istanbul and Kyoto. Please click here to visit the RedBall Project's website and follow its travels around the world.