Past, present and future ... 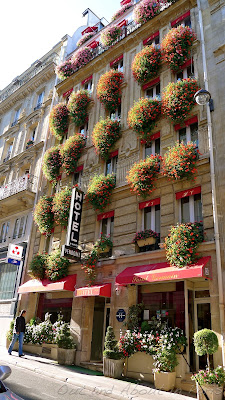 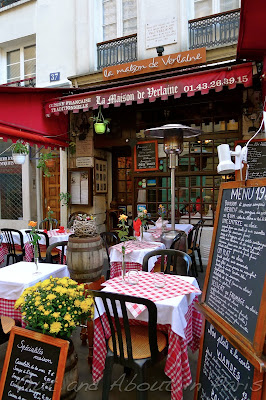 "Parisian" red awnings, I used to see them everywhere except over my windows.

Today's a red letter day. It's huge. Monumental. When I heard the news, I cleared my calendar of all appointments to stay home and wait ... wait for the arrival of the awnings that I've been anticipating ever since the owner of our apartment agreed to have them installed 697 days ago. As I've come to learn, things take time in France. A lot of time. And lots of nagging emails. The waiting game started when our landlord told us that all new awnings must be approved by the owners' association of the building. It didn't matter that almost all of the other windows already have awnings. There's a certain protocol that must be followed. Next, there was the question of the color. Did we want red awnings? Sure, why not. We were ready to take whatever color they would give us, anything to stop the sun from turning our living room into a sauna. "Good," our owner replied, "because the association only allows 'Parisian' red awnings." If that was the only color that was permissible, why were we wasting valuable time discussing it? Well, it turns out that there are four different shades of Parisian red.

In the intervening months, our hopes of finally receiving the awnings had been raised, only to be dashed by yet another demand for the measurements of the windows. The measurements? The ones that we had already sent the owner numerous times? So, when I received an email from the owner last night asking if the workmen could install the awnings today, you better believe that I responded with an enthusiastic "YES!". By this point, I would have cancelled a lunch date with George Clooney to be home when they arrived.

When I saw the crew this morning, I was initially disappointed to realize that they were the same workmen who had renovated our apartment, the ones who had made a mess of the electrical wiring and always seemed to forget an important tool, the one that was absolutely necessary to complete the job. Seeing them reminded me of my first days in Paris, when I didn't know anyone. Looking back, there's no way that I could have anticipated everything that has transpired during the past two years - and there's absolutely no way that I could have imagined being at Mlle Ella Coquine's "boozy lunch" bachelorette party last Saturday. As I haven't even told my family about what transpired at Ella's enterrement de vie de jeune fille, I invite you to click here to read Mlle Ella's blog post, wild women do. Be forewarned, there were striped French shirts, one or two berets and some multi-colored straws!

If you're in the process of planning a trip to Paris, be sure to look at "Out and About's" Facebook page. It's where I curate information about upcoming events, items of interest to Francophiles and photos of Paris. Today's posts featured the drive-in movie theater and roller skating rink that will be at the Grand Palais from June 10-21 and the series of silver and gold commemorative coins for the 100th Tour de France. You do not have to have a Facebook account to view the page.