"Mastering the Art of French Eating: Lessons in Food and Love from a Year in Paris" - Talking with author Ann Mah


Mastering the Art of French Eating has received rave reviews and praise from The Wall Street Journal, Library Journal and The Daily Beast. In June, I had the pleasure of talking with author Ann Mah about her food memoir and experiences as an expat in Paris.

The title and description of your book pays tribute to Julia Child, another diplomatic wife. Do you feel a special connection with her?
AM: As soon as we learned that my husband's next assignment would be in Paris, we started studying a map of France and plotting destinations using Julia Child's recipes as a sort of guide. Because her recipes span the country, we thought that these culinary adventures would provide us with an excuse to travel and eat.

With all of your advance planning, it must have come as quite a disappointment when your husband was called away from Paris for a year long assignment in Iraq. Do you have any tips for single travelers who would like to experience French food in restaurants but are hesitant to dine alone?
AM: It's true that dining alone can be awkward because it's usually a communal activity, one in which we find joy in being together. Going to a restaurant on your own requires a certain fearlessness. You can't be intimidated. To keep myself occupied between courses, I usually take a book with me.

Last year, I had the pleasure of hearing you speak at "What's Eating Paris", a panel discussion that featured food bloggers and journalists. One of the questions was about the reliability of restaurant reviews on community websites, like Trip Advisor and Yelp, versus blogs. How do you decide which restaurants you would like to try?
AM: My best resource for finding new restaurants is the internet, but I take my research very seriously. First, I compile a list of suggestions from Chowhound. If I'm planning a weekend trip to Vienna and want to know where to get the best wienerschnitzel, I'll cross reference the suggestions from Chowhound with information that I find on blogs. I rarely rely on one person's advice because I don't know if our tastes are similar.

For first time travelers to Paris, which French foods are worth seeking out?
AM: Definitely the viennoiseries, like croissants and pain au chocolat, and bread from Poilâne. For the experience of tasting French wine in a convivial atmosphere, I recommend going to a modern bistro or wine bar. Au Passage in the 11th arrondissement is a good choice. Their menu includes a selection of creative small plates. Steak frites is also quintessentially French. It's featured in the first chapter of my book.

What are the other chapters in your book about?
AM: There are 10 chapters and each one is dedicated to a particular region and speciality.

Which region or speciality was the most surprising?
AM: Andouillet, a pungent tripe sausage, from Troyes.

(Wrinkling my nose), I don't know if I would have the courage to try andouillet. I've heard that it smells like ... well, like ...  I've heard it stinks!
AM: It's definitely something that you have to ease into. The texture is kind of like a stretched out rubber band and it tastes like bologna. But it demands a lot of respect because of its place in the culinary culture of France. If it's your first time to try andouillet, it's better when it's served cold. The flavor isn't as strong. (Responding to the look of skepticism on my face) You could order one and share it.

What is your favorite French comfort food?
AM: Cassoulet, a hearty stew of sausages, duck confit, pork sausages and white beans, from the Languedoc.

How has your view of food been influenced by France?
AM: One of the biggest surprises was that people are encouraged to stop working during their lunch break. In Beijing and New York, all of my colleagues used to eat lunch in front of their computers. There's a great deal of respect for food and the ceremony of food in France.

What's your perfect day in Paris?
AM: If it's a Tuesday, I would start my day with an early morning visit to Raspail market. After dropping my produce off at my apartment, I would meet a friend for crêpes at Little Breizh in the 6th or West Country Girl in the 11th arrondissement. After lunch, I would go for a long walk. Once I was at home, I would write. Otherwise, I would feel guilty. For dinner, I would cook something from the market, probably fish or seafood.

As a former expat who now resides in New York, what advice would you give to other expats, like me, who will have to leave Paris one day?
AM: Part of the experience of being an American expat in Paris is leaving Paris. It's bittersweet. It's makes the city even more lovely because we know that we'll have to leave it. One of the saddest days of my life was when I moved, but life exists afterwards.

Please visit Ann Mah's website for "Adventures in Food, France and Beyond".

Following Jefferson Through the Vineyards by Ann Mah - An interesting article in The New York Times about Jefferson's travels in Burgundy. 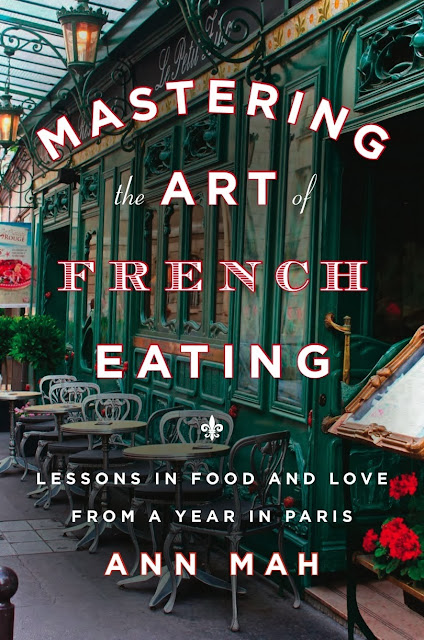