Discover the Paris of your favorite movie characters with Set in Paris, Le Movie Tour 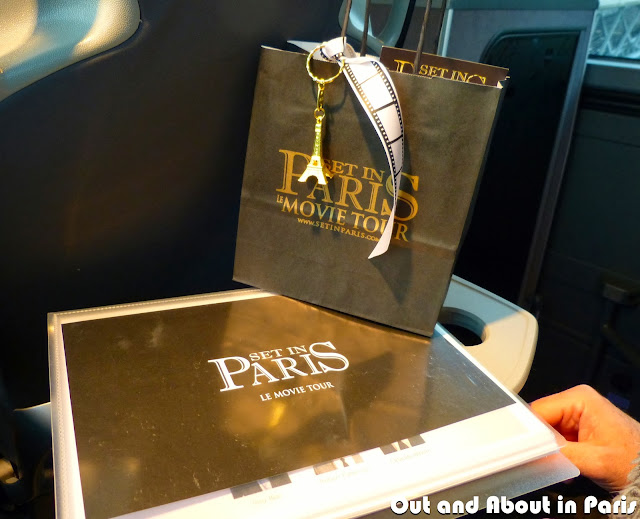 If you've ever watched Midnight in Paris and wished that you could magically transport yourself to the steps where Gil waited for the clock to strike twelve, I highly recommend Set in Paris, Le Movie Tour.

On a recent Saturday afternoon, Stéphane and I escaped the dreary Parisian weather by boarding a luxurious bus for an entertaining 3.5 hour guided tour of the city. As the driver pulled away from the curb, we watched a montage of black and white film clips on drop down screens while our guide Abby explained the history of film making in Paris. When we stopped in front of a plaque commemorating the Lumière brothers' first public screening of a film in 1895, I knew that we were in for an interesting tour. I love it when I learn something new. Even though I had haphazardly noticed the plaque while strolling past the GAP store on Boulevard des Capucines, this was the first time I understood it's significance. Sorry, New York! Motion pictures actually started with the Lumière Cinématographe projection system in Paris not with Thomas Edison's Vitascope.


From there, we traversed the city while Abby regaled us with stories about recent movies shot at such iconic locations as the Louvre, Place Vendôme and Boulevard Saint Germain. At the Place du Louvre, Abby suggested that we stretch our legs with a walk to the Pont des Arts, which has appeared in several films. Even though it felt good to get some exercise, we were all happy to return to the warmth of the bus, especially since it was time for our coffee and madeleine break! Not only does Le Movie Tour give an excellent overview of Paris for first time visitors, but it's truly remarkable to watch a scene from a movie while you're parked right next to the spot where it was filmed. It's like stepping onto a movie set!

A lot of research and forethought obviously went into Le Movie Tour and it shows. Being a visual learner, I really appreciated the movie clips and guidebook with photos from different films. Plus, Abby is one of the most cheerful guides that I've ever met.

Reviews of Set in Paris on TripAdvisor

Interesting fact: More than 950 films were shot in Paris in 2012. On any given day, ten film crews are shooting somewhere in the city.