The Sounds of Paris 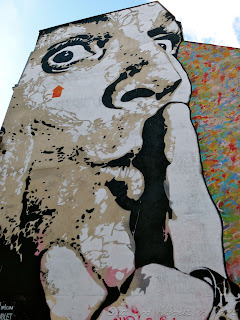 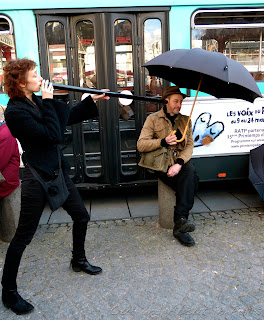 Paris is a smorgasbord for the senses, whether it's the tantalizing smell of crepes as you exit the Saint-Germain-des-Prés metro or the sight of small children at play in the Tuileries Gardens. After watching a film about a young deaf woman in New York City, who marvels at the cacophony of city sounds after she regains her hearing, I decided to pay more attention to the sounds of Paris. Here's what I heard.

On Friday, I had an appointment to test "les ambiances sonores du réseau" of the RATP. Imagining incorrectly that I would be riding on a metro train with a group of people assessing door buzzers or public announcements, I was surprised when the man conducting the test escorted me to the beginning of a long tunnel in the Opéra metro station. As we stepped onto the moving walkway, the RATP representative instructed me to do something that I would have never done on my own - to stop and listen. He explained that the sounds emanating from the four speakers spaced equal distances apart on the ceiling were the subject of the survey.

At the end of our short journey, the man ushered me to the side and started with some fairly generic questions, like "How often do you take the metro" and "On a scale of 1 to 10, how do you rate the Parisian metro system?" The next series of questions pertained to the sounds of musical instruments, singing and clapping that I had heard coming from the speakers: "Did I find them soothing or disturbing?" and "Did the sounds make the experience of going through the tunnel more or less pleasurable?" Considering that comprehending and answering the questions was already a linguistic challenge because we were speaking French, I felt pretty pleased with myself when he asked if there was a connection between the sounds and the location of the tunnel. Mais, bien sûr, the sounds represented the progression of an operatic performance from beginning to end at the Opéra metro station. What a clever idea!

From late Friday night until the wee hours of Saturday morning, I spent most of the time with a pillow plastered over my ears. While our upstairs neighbors had posted the requisite note on the front door of our apartment building forewarning the other residents that he would be hosting a party to celebrate his birthday, he had also promised to be considerate. He lied. With the sounds of high heels clacking on the wooden floors and the vibrations from the music shaking my bed, I nonetheless found myself smiling when the Parisians started singing along with the American songs. Admittedly, their pronunciation left a lot to be desired, but they were young people having a good time. I took two herbal sleeping tablets, clamped the pillow back over my ears and tried in vain to sleep.

On Saturday afternoon, I had the great pleasure of having a poem by the Argentine poet Roberto Juarroz whispered in my ear. Traveling from the mouth of la Souffleuse through the hollow cane placed against my ear, the words went straight into my heart. As part of the 15th Printemps des Poètes ("Spring of Poets"), Les Souffleurs were whispering poetic, philosophical and literary secrets as part of the flashmob gathering at the Pompidou Centre yesterday.

It's amazing what you hear when you take the time to listen. Please click here to see additional photos of Les Souffleurs. 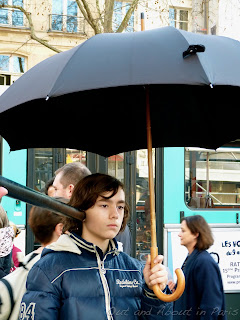 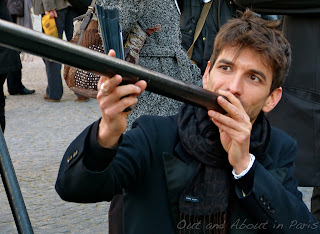