Signal Festival of Lights illuminates the historical heart of Prague!


Wandering through the chilly streets of Prague with a map clutched in my hand last night, I was reminded of the excitement I felt when I was a child trick-or-treating for candy on Halloween. Even though I wasn't wearing a costume, the heightened sense of anticipation was the same. Out of the corner of my eye, I suddenly spotted an enormous luminous object on the roof of Charles University. Fumbling for my camera, I snapped a photo of the extraterrestrial being while a group of youngsters behind me squealed with delight as they pointed at its hulking form.

Rather than a fearsome creature, the glowing figure was one of five monumental art installations created by Australian artist Amanda Parer that are part of Prague's Signal Festival. Annually attracting crowds of 400,000 to 450,000, the highly anticipated four-night festival features creative outdoor lighting installations and video-mapping exhibitions. It's the Czech Republic's largest cultural event. 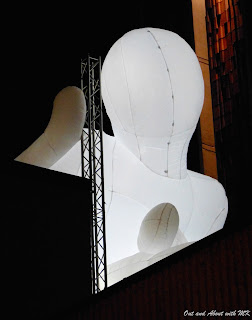 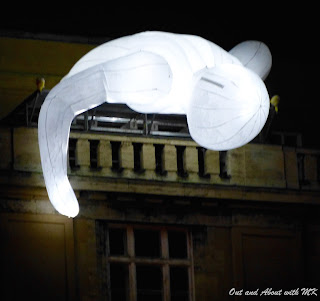 
Perhaps the best part of my outing yesterday evening was the sense of community that I felt. Thanks to all the tourists who visit the historic center of Prague, I regularly hear a multitude of different languages but rarely do I hear Czech. Last night was different. It was the first time that I've attended an event with so many local families, university students and groups of friends. Although I didn't have a clue about what they were saying to each other, their excited exclamations warmed my heart.

To make the most of the festival, pick up an official program (50 CZK) from the tourist information office or one of the clearly marked Signal Festival information points. The guide has a handy map with the locations of the 22 installations along with information about the artists.

There are long lines at the interactive installations so be sure to bundle up. It's cold outside!