When will we learn? Refugees from war-torn countries endure deplorable conditions in France.


When Stéphane, Philippe and I visited In Flanders Field Museum in Ypres, Belgium over the holidays, I stood transfixed in front of a video showing women in long coats struggling under the weight of heavy bags and emaciated men carrying children on their backs. The grainy black and white images of refugees filmed during World War I were almost identical to the ones we currently see on the nightly news showing people fleeing their war-torn homelands. 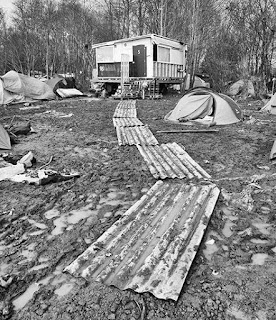 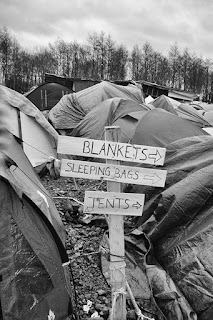 
For the past couple of months, Australian photographer Carina Okula has been collecting donations of coats, blankets, hats, gloves and food supplies for the modern-day refugees in France. If you would like to help, please read Carina's post, Humanitarian Crisis in France – life three hours north of Paris, and make a contribution to her Refugee Humanitarian Aid GoFundMe account. Carina is a dear friend and I can assure you that every cent of your money will go to help the refugees.

The muddy field is home to approximately 2000 refugees who have fled their homelands of Iraq, Syria and Iran – fleeing Daesh and war to stay alive with the hope for a new tomorrow. We walk through the mud – 10, 15, 20cms deep. The women, children and men of the camp eat and sleep in it. They have no escape. Young babies, rats, disease all co-habitat. There is no electricity, only a few portable toilets and not a working shower in sight. ...

It’s not possible to say that people are living in these conditions, for this is not life. Somehow they find the stamina/courage to endure this … but for how much longer? ...

So much of what happens in the world at the moment is dictated by fear – the louder the voice, the more fear it is able to spread. Religion, politics, nationality shouldn’t come into play and allow such deprivation of basic human rights – instead we should listen to the quiet voice in our hearts – the one that says people should be looked after, no matter where they are from, what faith they believe in, what language they speak or how they dress.

Wars never stand in isolation.
It is almost as if they have roots
that grow invisibly underground,
before springing up somewhere else
to create a new conflict. We must not be blind
to the forces that set the machinery of destiny in motion
one hundred years ago.
To do so would rob us of the chance to discover
the patterns of the past that can help to teach us
the lessons we need for the present and the future.
Erwin Mortier
Letter of Intent
GoneWest Remembrance Programme In Flanders Field Museum