Homage to Helen Bordman, the first American volunteer at Giverny!

I’ve been to visit Claude Monet’s home in Giverny about a dozen times over the past 22 years. I especially like to go there when my friend Helen Bordman is in residence.

Helen is the first American volunteer at Giverny since the grounds were opened to the public in 1980. Through her hard work over the last 35 years, she has been largely responsible for the renaissance of Monet's home and garden. She also appeared in the 2004 documentary Monet’s Palate – A Gastronomic View from the Gardens of Giverny that was written, filmed and produced by her daughter Aileen Bordman and narrated by Meryl Streep. In addition, she founded Giverny’s volunteer program and has resided on site each spring, sharing her passion for Monet and welcoming visitors from all over the world, giving lectures and tours. 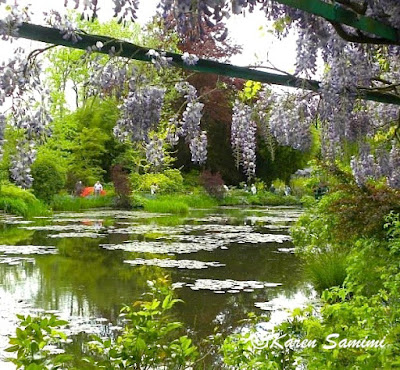 I met Helen in Giverny for the first time in 1996, but I had already been there once before a few years earlier. I hadn’t realized at the time that my great aunt was her best friend growing up in Brooklyn, New York and that the two had remained very close for all those years. My aunt had always longed to visit Giverny, and I promised that I would go and meet her dear friend.

I quickly realized what an exceptional lady Helen is. Her smile, her laugh, her humble and unpretentious manner, and her cozy anecdotes about all kinds of things make you feel immediately welcome. I loved her personal tour of the house and gardens because it really made them come alive. She is a true authority on the history of Claude Monet’s life and family. I recently learned that Helen, too, is an accomplished painter, and not surprisingly, much of her own work is inspired by her many spring seasons in this charming village.

Whenever I think of or talk about the house and gardens of Giverny, I immediately think of my friend Helen. For my family, and certainly for many others, they are inseparable.

Helen's daughter Aileen Bordman is the author of the newly released Monet’s Palate Cookbook: The Artist & His Kitchen Garden at Giverny. 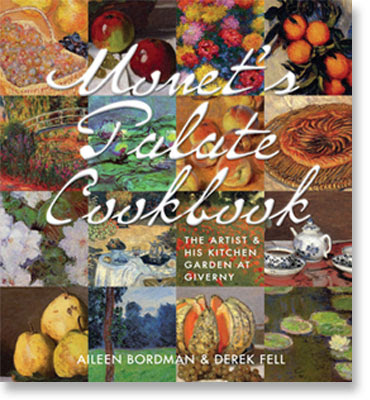 For the first time in history, Monet’s Palate Cookbook: The Artist & His Kitchen Garden at Giverny brings Claude Monet’s beloved kitchen garden back to life. Written by filmmaker Aileen Bordman, and garden writer Derek Fell, the book includes sixty recipes linked to Monet's two-acre kitchen garden near his home at Giverny, France. Included is detailed information about the vegetables he grew, plus photographs and descriptions of the house interiors and gardens capturing Monet's extraordinary lifestyle. Meryl Streep has written the Foreword and the recipes are beautifully photographed by Steven Rothfeld. ...

The recipes were developed using the abundance of fresh herbs and vegetables found in Monet’s kitchen garden. Some of Monet’s favorites to grow in the kitchen garden included zucchini, cherry tomatoes, radishes, pearl onions, brussel sprouts, asparagus, rosemary and mint. A few of the recipes are of French origin, such as the famous Normandy apple tart. Others are from locations abroad where he traveled in search of motifs to paint, such as the Savoy Hotel, London where Monet acquired their recipe for Yorkshire pudding. Exquisite photography and inspired recipes brings Monet’s kitchen garden back to life.  --Excerpt from Monet's Palate, Aileen Bordman's website.
Labels: Aileen Bordman Giverny Helen Bordman Karen Samimi Monet Monet's Palate Monet’s Palate Cookbook: The Artist & His Kitchen Garden at Giverny