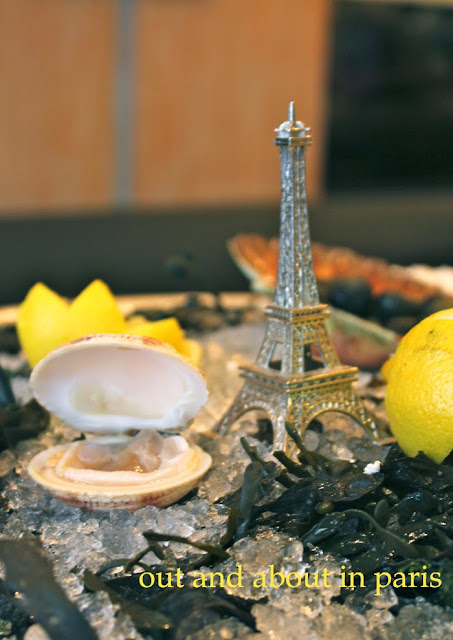 It’s been suggested that scent is the strongest sense tied to memories. Just the wave of an essence can transport us to a small moment in time, regardless of how many years have passed. While smell champions the five senses, it can be said that nothing quite unlocks memories as eating an oyster does. The salty and silky mouthful of the sea that slips downs your throat welcomes recollections of a seaside vacation when life was allowed to sit still, pairing your oysters with a light glass of wine long before cocktail hour, tickling the mollusk with the sharp mignonette sauce, and if you’re in France, perhaps there is striped boat neck top painted somewhere in the memory. 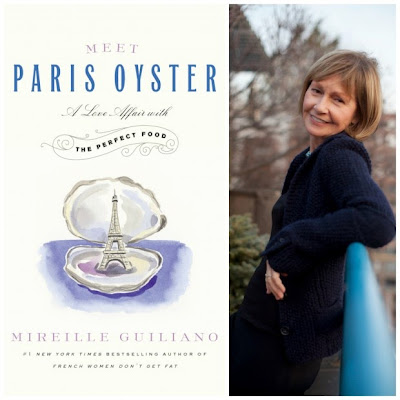 An oyster, for us aficionados, is not a matter of simply loving them; it’s a matter of celebrating them. So much that when it was announced that Mireille Guiliano, the tour de force behind the sensation French Women Don’t Get Fat was once again bestowing us with her wisdom with Meet Paris Oyster: A Love Affair with the Perfect Food (Hachette 2014) I had to put my knowledge of my beloved oysters to the test. As suspected, only several pages in, I found that as an oyster devotee, I still had a thing or two to learn about this Parisian pastime.

The book is broken down by thirteen chapters fraught with information ranging from the history of oysters, the author’s favorite niche spot to enjoy them in Paris, the legion of health benefits that these treasures of the sea offer and accounts from women all over the world divulging details of their “first time.” After devouring this quick, delightful and at times seductive read, I closed the book with a satisfied knowledge of oysters, a salacious appetite to slurp down a dozen of them, and was awash with the sounds of the rolling ocean, reminiscing over my last summer vacation spent in the South of France. So perhaps, reading about oysters also revives the senses. 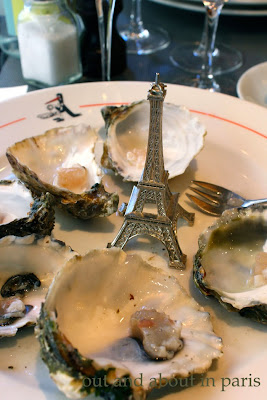 While the book recounts the history and the author’s experience behind a celebrated huîtrerie located in the historic Saint-Germain-des-Prés neighborhood of Paris, I decided to put to the test what I learned from the book at another oyster bar, because after all, not all Parisian huîtreries are created equal. Upon my search, I discovered L’Huîtrier in the refined 17th arrondissement whose éscailler Mr. Francisco Pirès had recently won the first prize champion as the best oyster shucker in all of Europe and second prize in the World Cup competition.


Set on a quiet street off the renowned Marché Poncelet, I arrived on a chilly Friday autumn afternoon, where the awaiting staff warmly welcomed me with a cozy spot by the window and a small bowl of mini pink crevettes to ignite my appetite. Unlike the classic décor for many seafood restaurants in Paris fashion, Breton decorator Thierry Mahé designed the restaurant with warmer simplistic notes of deep blonde close-set wooden tables and glowing wall sconces keeps the focus less on the seafood and plats that demand center stage.

Once settled in at my table with my little Eiffel Tower statuette (you know, to make sure I knew I was in Paris), Patrice, the handsome server who I learned has known Alain since he was a child, asked what I would like to drink during my exploration of the senses. While Meet Paris Oyster frequently recommends pairing oysters with a glass of Sancerre, I heeded to another one of Guiliano's suggestions flourishing in chapter nine, and requested a glass of Champagne. When in France, right? My first course boasted a selection of raw bar specialties that Patrice and Monsieur Pirès picked for me based on my adventurous attitude. A large platter packed with crushed ice artfully displayed langoustines, crab, shrimp (holding their little lemon wedges!) sea urchins, escargots (I finally had my Pretty Woman moment trying to get the “slippery little sucker” out of its shell. I was too embarrassed to look up to see if Patrice had caught it as it flew across the restaurant.), and of course a rainbow selection of oysters fanned out along the edge that I was instructed to eat in a certain order.

Founded in 1989 by Alain Bunel, the son of a fisherman decided after touring the world on a sailboat to share his passion for oysters and opened L’Huîtrier impressing an image that is “chaleureuse et idéale” (warm and inviting) complete with service that is “souriant et énergique” (friendly and energetic.)


What makes someone an expert at opening oysters, you may ask. Well first, have you ever tried to open one of those shells that seem almost welded shut? What I learned from Madame Guiliano’s text and saw from Monsieur Pirè’s artistry is that it is not simply a matter of opening the encrusted shell quickly hoping not to slice your hand open, but rather the fine craft of sliding and unhinging it with precision and effortless ease, careful not to spill the oyster’s natural liquid (which is referred to as the liquor) or to get particles of cracked shell that would ultimately tamper your oyster experience. Newly aware of these specifications, it came as no surprise why L’Huîtrier had been awarded with such prestige, as each oyster varying in size, texture and salinity resembled what could without dispute be described as edible works of art.

Meet Paris Oyster: A Love Affair with the Perfect Food out now!