While based in Geneva a few years back, I came to spend enough weekends in Paris that it made sense—or so I easily convinced myself—to maintain my life-sustaining (slash) luxurious addiction to the City of Light via flat share. But this seemingly manageable goal turned into the real estate misadventure of a lifetime (and this from someone who has flat hunted in NYC).

The hi-jinks started with a stunning three-bedroom apartment in the southeastern lowlands of Montmartre. Though I normally shied away from the touristy Ninth arrondissement, the email photos of the room for rent had me at JPEG. A distressed antique chair sat facing a floor-to-ceiling window, basking in its bright light: a writer’s dream come true! Not to mention an enormous, fully equipped kitchen—a rare find in Paris. Upon arriving, I reveled further in the nearby farmers market (Metro Anvers) and the uncharacteristically spacious and fast moving Deco elevator that would carry me home each day. In such a place, I could easily conjure up feasts both real and fictional.

But my fantasies were put to rest when my potential—and pleasant enough—colocotaire gave me the tour. First, the antique chair I had seen in the photo was, in fact, only about two feet tall (intended for infants of generations past). The floor to ceiling window was therefore in reality probably six feet tall. I turned to the owner with a look of confused horror on my face, and she explained with a giggle that she was once a fashion and design photographer and could do wonders with angles and interiors. And before I could even process—let alone protest—such a gross misrepresentation, and the fare and time I had allotted in travel to the flat, she directed me to a slender armoire in the corner and opened it. “You can put your things here,” she said, pointing to the half of it that was empty. There was almost enough space for a single pair of shoes and two hanging suits—but not quite. (The shoes would have to be stacked.)


At that point, I flinched, covering my open mouth. I may have even made an instinctive, jerky move towards the exit. But my smiling tour guide remained oblivious to any signs of personal distress and began reciting a long list of house rules. Thus, it hit me (and hard): her Internet optical illusion had been working! Indeed, there must have been a steady stream of young students, fresh off the plane and so hard pressed for housing, that they were willing to overlook things like wearing clothes during their time in Paris. Talk about twisted market forces!

I was then led to the oversized and empty kitchen. “This is where you can store your food,” she instructed, pulling aside a homemade curtain that covered a plastic crate on its side. (I had to admit, the allotted space was generous compared to the clothes closet; I might have fit two good-sized boxes of energy bars in there.) As it turned out, this potential colocotaire not only did not cook (probably the one Paris born individual who consumed only raw, macrobiotic foods) but admittedly, “did not enjoy eating” per se, and discouraged her tenants from cooking and eating as well.

Going without clothes was one thing. But the idea of a kitchen for visual purposes only, in a city so devoted to the love of food and in which good kitchens were so hard to come by, in a flat so near a famer’s market, was just too much to bear. I fled.


Once I had recovered, however, I investigated a flat share in the beloved 11th arrondissement, tucked away on a maze-like side street between Voltaire and Charonne Metros. I had always appreciated the lower key cafes on some of the lesser-known streets in this part of town. It was an area in which people might even learn your name. A writer and her laptop could actually get some traction in the morning without being shooed out for the lunch crowd.

The woman renting out the room was a professor with a lovely, welcoming and open demeanor. Unfortunately, the flat itself was a bit less expansive. As it was, there was no room to stand—much less sit—save for in the shower, at the stove, or at the foot of the bed in the room for rent. She suggested that given the lack of common area, one could simply stand in the doorways. I said that at least she had a high-end swivel chair to sit on while working at her desk. But then I noticed the rest of her bedroom was taken up by her sleeping arrangement—and by “arrangement” I do not mean “bed,” but rather a sleeping bag on the floor. “No one really needs a matelas or frame,” she explained. And who was I to argue? Nevertheless, I was intent on renting a place where I could stand, or even sit, outside of the moments I was asleep, making coffee or bathing.

As I departed the 11th, I wondered: was I witnessing a trend of self-imposed asceticism—perhaps as a rebellious countermeasure to such an aesthetically pleasing city? This idea propelled me onward to the next flat. I was fascinated in the way anthropologists become obsessed by the discovery of new people and their ways of life. Of course, there was nothing particularly French or Parisian about this lifestyle, but I was certain I had stumbled upon a unique underworld of flat sharing with random foreigners—a sub-cultural context of distorted supply and demand.


Perhaps survival in Paris simply required living one’s life outside of one’s abode. Flat sharers might settle for a place to sleep, shower and receive the occasional piece of mail. Or maybe, as I came to understand on my visit to a flat near Strasbourg St Denis, you would simply forego the sleep. (Afterall, one could probably cuddle up during the day at the Institut du Monde Arabe or the Bibliothèque Nationale.) I had always found this quartier a transitional segue between neighborhoods, but given its convenient and central location, I was hoping to being persuaded of its charm: and certainly the flat had its size and brightness going for it. There was even common space and access to the kitchen with no restrictions.

I asked if the bedroom for rent had a good-sized armoire or closet. The keeper of the flat, a shirtless young man who had greeted me with sleepy eyes, led me down the hall and opened a door. The room did not exactly have a closet; it was a closet. A reasonably-sized, corner closet. By this, I mean it was reasonably sized for hanging clothes (especially compared to the Montmartre armoire). I pictured all my shoes and clothes fitting nicely in it. The one problem with the room, as he called it, was that while a twin mattress could actually fit in it, the mattress could not be laid flat given that the space was essentially a triangle, so renters normally positioned the mattress diagonally and folded half of it up against the wall, sort of like a chair. The renter could then sleep sitting up. With all the comfort of sleeping on a plane, I noted, minus the tilt-back function of the seat and headrest.


I told the guy that I wasn't very good at sleeping at ninety degrees—then clarified I meant the angle, not the temperature in Fahrenheit/English (though, conceivably, that could also be tough.) There was still the critical matter of breathing in a windowless space, but I refused to believe that house rules precluded leaving the closet door open. Still, I didn’t ask…

I left that flat feeling I had been altogether wronged by the right—bank that is. Though I eventually found a six-floor walk up loft with a sprawling internal courtyard less than a mile east of Bastille. By then, the search for a flat share had presented its fat share of problems, so I ignored a gross architectural misdemeanor committed by the owners: a pseudo gazebo built around the dining area. Though tacky beyond measure, that gazebo did not stop me from cooking, lounging, sleeping or making significant inroads on my novel, Seeing Green. I had a spectacular view of the gray Mansard rooftops perched on the other creamy lemon Haussmanns that surrounded our building. Situated at the mouth of the Faidherbe-Chaligny Metro, the flat was a quick walk to Marché d’Aligre, and fifteen minutes to Gare de Lyon (and the train back to Geneva).

Of course, such a situation did not last long; the owners came back to reclaim their rightful place in the 20th, and the next time I would find a Paris flat, it would be solo. Nevertheless, I had triumphed, and Flat-share-boot-camp had given me a fundamental appreciation for all co-housing arrangements thereafter. Once secure in my lodgings, I could delve into the dramas of my novel’s protagonist, and leave the real life spectacles behind. I never looked back on that underworld (until now). I consider my voyage there a true testament to what people are willing to do for a Paris address.

Author Annabel Hertz's Seeing Green is a “timely, energetic and witty” story of a young woman “on a mission to puncture the stasis" of environmental policy (HuffPo). The novel takes place in the lead up to a Paris Ministerial (much like this December's climate change conference in Paris) and pays homage to international---and office---politics, and idealism. This "felicitously fast-moving, tightly organized narrative” also explores the rocky and rewarding terrain of family and personal relationships from the perspective of a multicultural protagonist. Connect with Annabel Hertz via Facebook.

Don't miss the giveaway of Seeing Green on Out and About's Facebook page on Thursday, August 13, 2015! 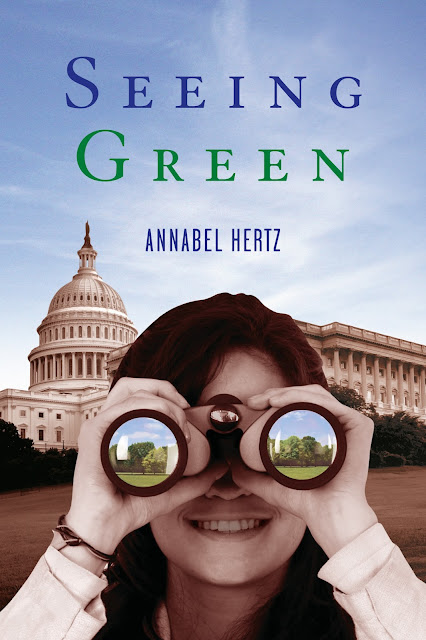